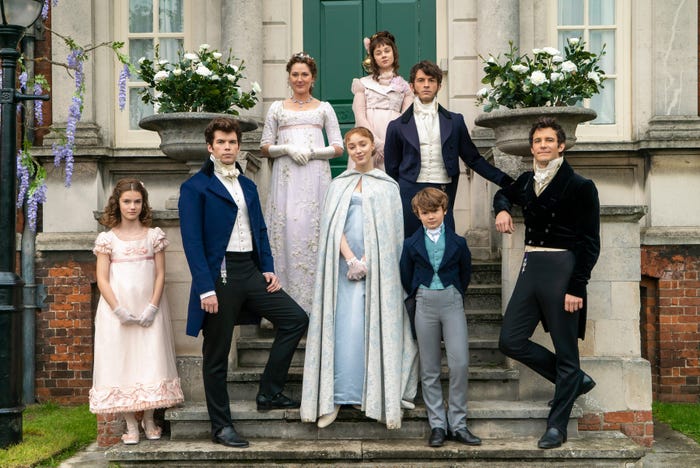 Lady Whistledown is both the most powerful and most elusive member of society on season one of Netflix's "Bridgerton."

Because while the anonymous gossip columnist (voiced by Julie Andrews) seems to know everything about Regency era London's high society, no one knows a single thing about her.

So Eloise Bridgerton (Claudia Jessie) and Queen Charlotte (Golda Rosheuvel) set off on a goosechase to unmask her, suspecting everyone from tradespeople to the town modiste. Little do they know, Whistledown is the last person they expect: Penelope Featherington.

The youngest Featherington (played by Nicola Coughlan) is overlooked, underestimated, and perhaps the least likely candidate to be behind the society papers or so it may seem.

Though Penelope may be naive and have a tendency to fade into the background, especially during the balls where women are being plucked and ushered toward the dance floor, she's extremely well-positioned to collect information about those around her and publish it when no one's watching.

Ahead of her big reveal on the season finale, "Bridgerton" writers dropped subtle hints about Penelope's double life along the way. Keep reading to see the clues you might have missed. 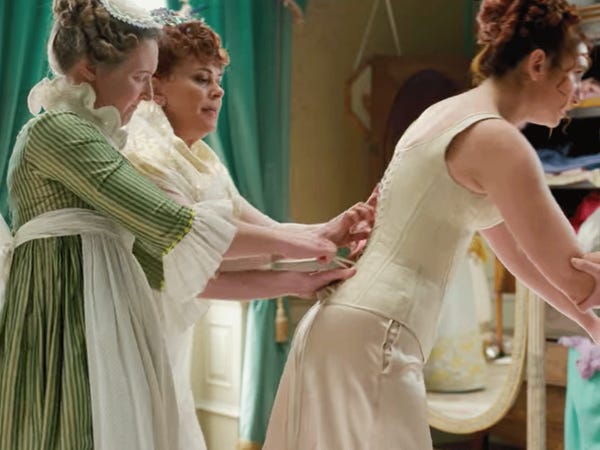 Whistledown gives a brief rundown of the main players at the beginning of episode one, including a scathing description of Lady Portia Featherington.

Portia certainly has a reputation around town, so the opening line could've been written by a number of people. However, no one seems more frustrated by her behavior than her youngest daughter, Penelope.

From the series' opening moments, Penelope disagrees with her mother's views on everything from marriage to her treatment of her cousin Marina, so it's a tip-off that Whistledown consistently paints such a negative picture of Portia.

The town gossip writes that only three girls would be under Portia's care, which makes sense since Penelope wants to delay her debut. 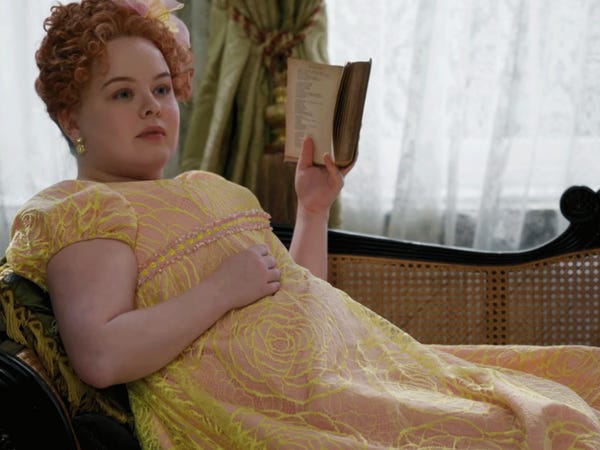 Not only does Penelope smirk when Lady Cowper tells Portia that Whistledown reports "nothing but the truth" in episode one, but the youngest Featherington seems to use the column as an opportunity to back out of her debut.

Portia claims that Whistledown "erroneously" wrote that she'd only have three women under her care for the season — Prudence Featherington, Philipa Featherington, and Marina Thompson — leaving out Penelope.

"She knows nothing," Portia says of the writer.

As soon as her mother breaches the topic, Penelope hops up to propose that she push off her debut, telling her: "I should gladly sit this season out."

While it may come off as Penelope vocalizing her nerves in the moment, the short interaction is a clue that Penelope wrote the Whistledown column to get out of her social obligations. 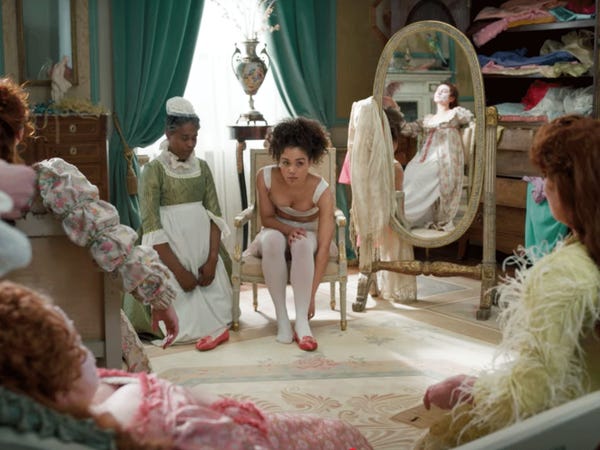 From the moment Marina walks into the Featheringtons' household, the matriarch sees her as a burden and a distraction from her own daughters.

When the newcomer snags widespread attention at the season's opening ball at Danbury House, Portia's frustration only grows. And Whistledown seems to egg her on.

"It follows that Lady Featherington is to receive what she has always desired: the season's true incomparable living under her own roof," Whistledown writes, adding, "She must be overjoyed."

Though anyone at the ball could sense that Marina made quite an impression on the town's suitors, Penelope is fully exposed to her mother's reaction and may have used the column to poke and prod her.

Whistledown publishes the news about Lord Nigel Berbrooke the day after the Featheringtons' maid hears it at the market. 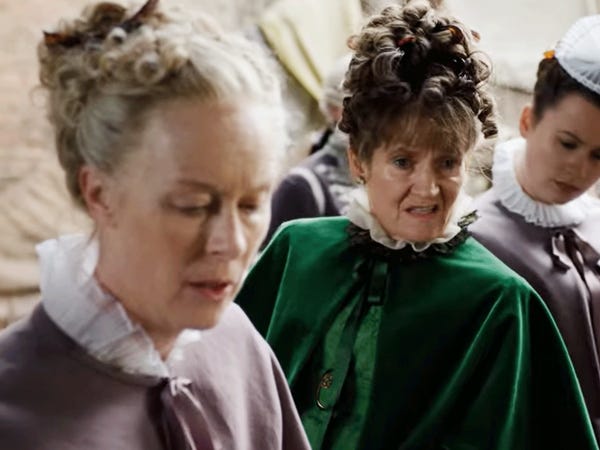 Lady Violet Bridgerton spreads the news about Berbrooke's scandalous past to prevent his engagement to her daughter, Daphne Bridgerton.

"We shall do what women do," Violet tells Daphne. "We shall talk."

Her maid, who's also in on the plan, shares the story with the Featheringtons' maid, who likely brings the gossip home to her employer.

The very next day, Whistledown publishes a column exposing Berbrooke.

Penelope assures Eloise that Whistledown's identity is "quite protected." 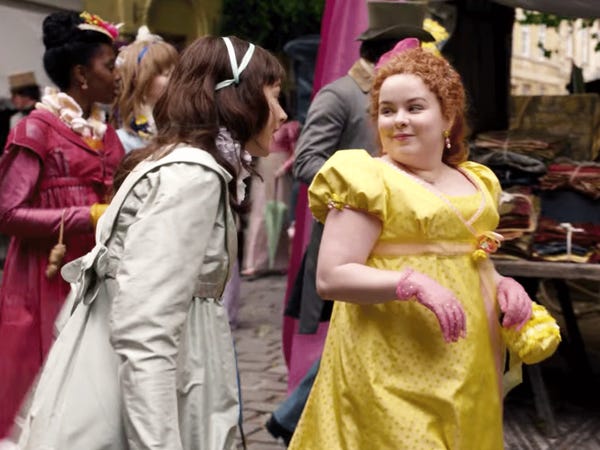 Eloise idolizes Whistledown, viewing her as an independent, fearless woman rebelling against society.

She raves about the mysterious writer to Penelope, who merely smiles and humors her longtime friend, and suggests that they try to meet her.

"Lady Whistledown's identity is quite protected," Penelope says, brushing off the plan and telling Eloise that her social calendar is too busy to help her hunt.

Penelope shows off her snarky side to Colin, sharing her theory that Lady Trowbridge had an extramarital affair. 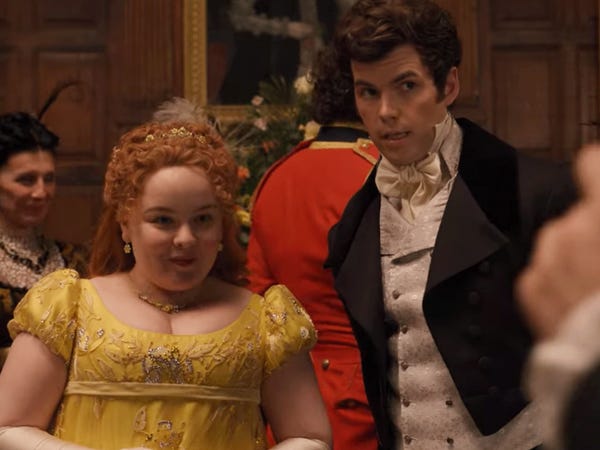 While indulging in playful banter with Colin at Lady Trowbridge's ball, Penelope exposes her mischievous side.

Colin jokes about the fact that the host, an infant that Lady Trowbridge gave birth to before her husband died, was throwing a tantrum.

"It's lucky the lady produced an heir before the old earl croaked, eh?" he asks Penelope.

She responds, "Lucky indeed. But do you not think the boy bares a passing resemblance to Lady Trowbridge's footman?"

Colin looks surprised by her comment, calling her a "barb." And while the moment was just another witty exchange at one of the many balls in season one of "Bridgerton," it proves that Penelope is dialed into the town's gossip.

She also doesn't care what Eloise has to say about her search for Whistledown's identity. 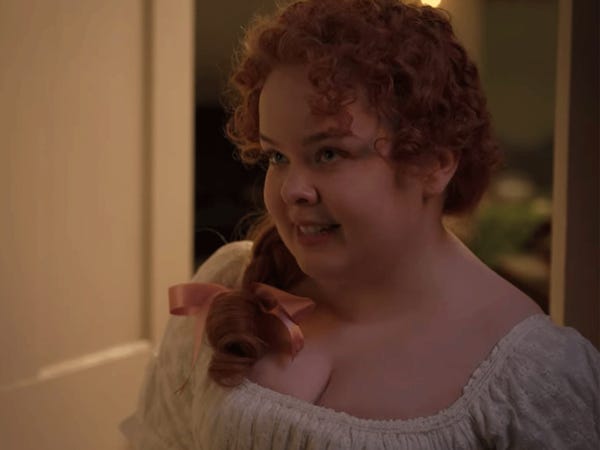 Penelope is devastated after hearing that her cousin Marina plans to marry Colin. So when Eloise comes knocking on her door later that evening with an update on her search for Whistledown, she isn't in the mood to make small talk.

However, Penelope doesn't even let Eloise explain her theory. Instead, she calls Whistledown "some silly writer" and tells Eloise that she doesn't care who she is.

In retrospect, Penelope not only reacts this way because she's upset, but also because she knows Eloise hasn't unmasked Whistledown's true identity. 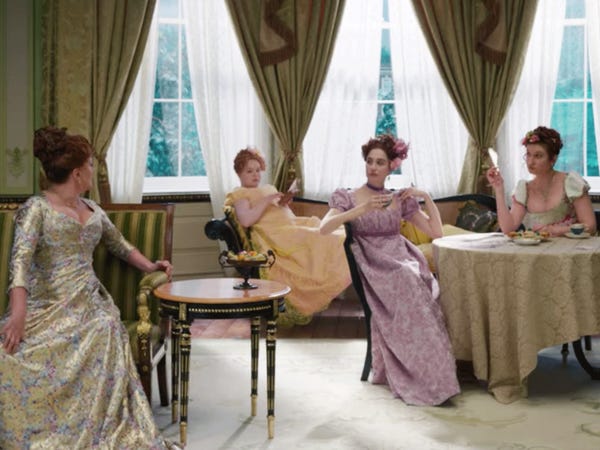 When she's not attending balls or being sheparded in front of suitors by her mother, Penelope often appears on-screen with her nose in a book. She even vocalizes her desire to push back her debut in society to continue her studies early in the season.

While this detail doesn't uncover her as Whistledown, the person behind the column is likely well-read and educated. 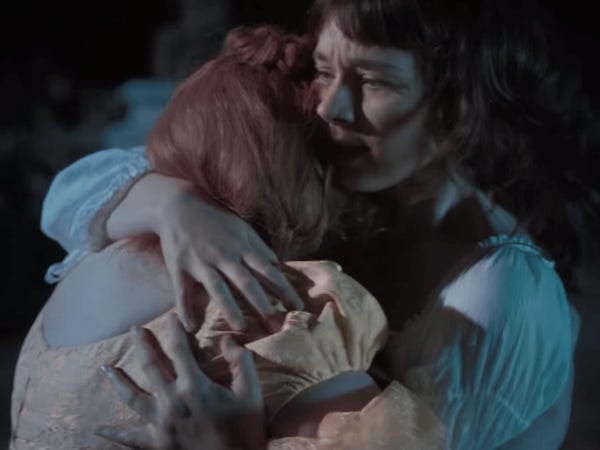 Believing that George doesn't love her, Marina tells Penelope her plan to run away and marry Colin.

Penelope is heartbroken and seeks comfort in Eloise, which seems like a result of her sadness in the moment. But when Whistledown publishes a column about Marina's pregnancy the following morning and effectively destroys the engagement, Penelope's reaction can be interpreted quite differently.

Her sobs may have been partially due to sadness of Colin's feelings for Marina, but it's more likely that she feels guilty for sharing her cousin's secret.

Whistledown specifies that Colin isn't the father of Marina's child, which could've been Penelope's attempt to protect him. 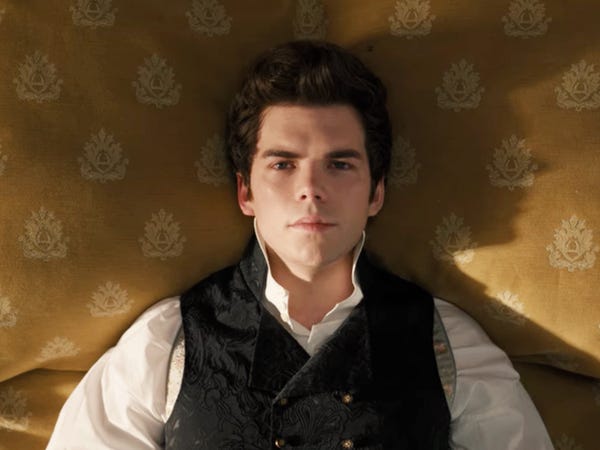 Even though Whistledown reveals Marina's secret in her papers, she makes a point to say that her intended, Colin, isn't the father.

Not only does that mean Whistledown is someone close enough to Marina and Colin to know this top-secret information, but it also means she doesn't want to bring shame to Colin or the other Bridgertons.

Both those criterion describe Penelope, who knows more about Marina's condition than anyone. The column protects her bestfriend, Eloise, from having a tainted reputation and the man she loves, Colin, from being accused of something he never did.

"Because of her, Colin, no one believes you are the father of Miss Thompson's child," Anthony Bridgerton tells his brother of Whistledown.

Even after she's labeled as "ruined," Penelope's first question is about how Colin reacted to the column. 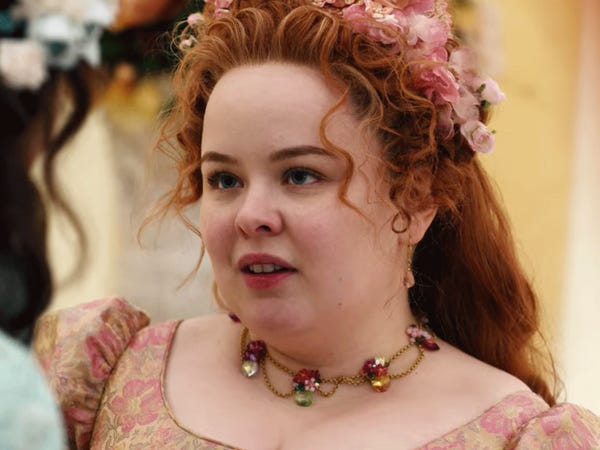 When Eloise checks in on her friend to see how she's faring after Whistledown's column about Marina, Penelope briefly answers her before leaping into questions about Colin's reaction.

"We've not had a caller in three days. My mother sweasrs we are ruined," Penelope says.

She continues: "But what of Colin? Is he in pieces from the news?"

Despite the fact that Penelope and her sisters may be "ruined," her first thought is Colin. Maybe it's because she's in love with him, but it could also be because she holds power to change the public's perception of her family in the future.

Whistledown omits Queen Charlotte's luncheon from her column after the royal rescinds the Featheringtons' invitation. 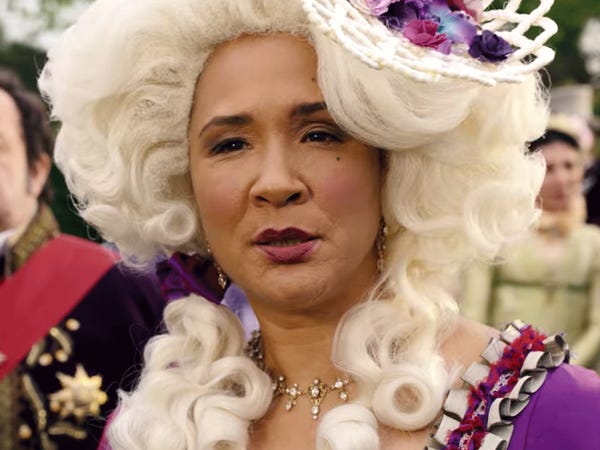 Queen Charlotte is curious about Whistledown's identity from her first column, finding amusement in the latest gossip floating around London's upper ranks. But after the writer declines to give coverage to the royal's society luncheon, Charlotte becomes determined to silence her.

Either way, the fact that Whistledown doesn't write about the luncheon, which was a major society event, hints at the Queen's strained relationship with the Featherington family.

Penelope encourages Eloise to share her theory with Charlotte at the concert, even though the Featheringtons aren't invited. 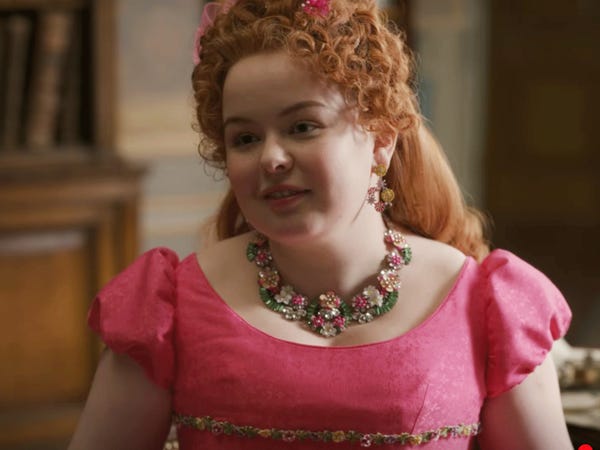 Penelope pushes Eloise to share her new theory that Whistledown is a tradesperson with the Queen at that evening's concert, perhaps as a way of leading the royal down the wrong track.

She usually never pressures her friend into attending events with the understanding that Eloise doesn't wish to enter society, especially when Penelope isn't attending the event herself. So when she does encourage Eloise to go, it raises questions about her true motivations.

As Madame Genevieve Delacroix later points out to Eloise in episode seven, everyone in town was at the concert except for the Featheringtons. So Penelope may have wanted both Eloise and Charlotte to be distracted while she printed the next day's paper.

She panics after Eloise says she uncovered Whistledown's identity. 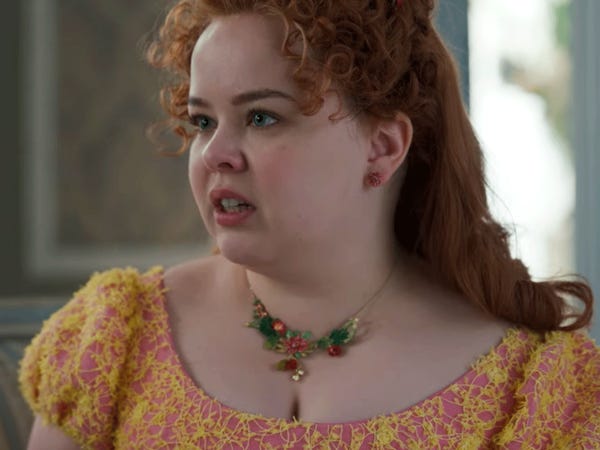 Looking startled as she waits for the answer, Penelope asks, "Who is she?"

When Eloise tells her that Genevieve is the writer, Penelope doesn't follow up with any questions, but instead tells her she's "happy you found her." 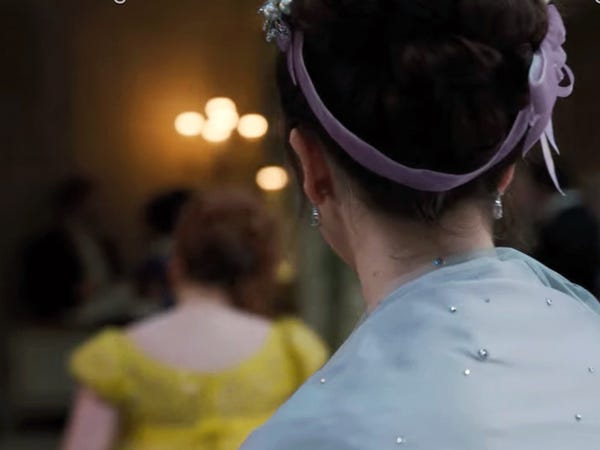 Penelope runs into Eloise at the Hastings Ball in the season finale. As Eloise prepares to share her findings with the Queen, Penelope tells her to "go before you miss your chance."

She then darts off, presumably out of the party, and isn't seen again at the event.

So while Eloise throws Charlotte off course, Penelope is likely fleeing the ball to drop off the next day's paper at the printing press. 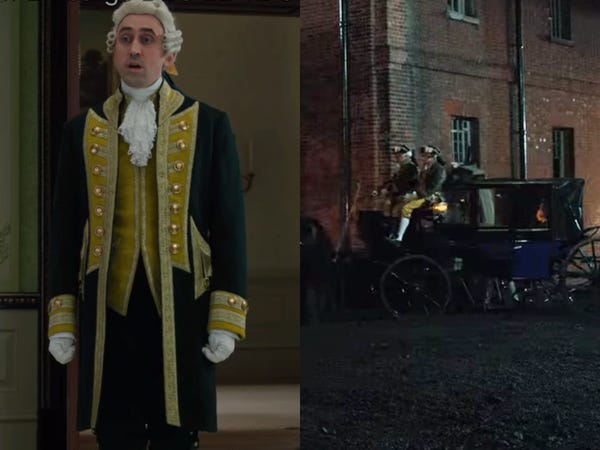 The Featherington family members consistently wear loud colors in hues of yellows and greens. Their help seems to don the same color scheme.

It was dark when Whistledown approached the printing press in episode eight, but the carriagemen are wearing yellow pants and green jackets — making it look like they work for the Featherington family.

Penelope says that Whistledown is "still on the loose" ahead of the next social season. 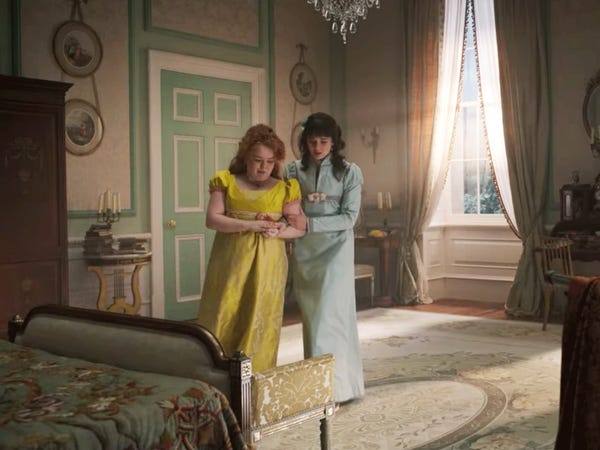 Penelope asks Eloise what happened the evening prior, when she stopped the plot to uncover Whistledown.

Eloise confirms that she saved the modiste, who she believed to be the writer, and Penelope seems pleased.

"I'm sure with Whistledown still on the loose, next season will be far more interesting," she says.