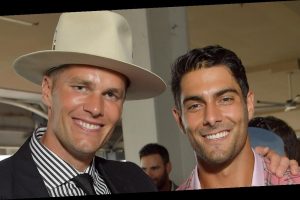 If you don’t know, the 28-year-old athlete used to be Tom Brady‘s backup quarterback while playing with the New England Patriots from 2014-2017. He won two Super Bowls with the Patriots as their backup.

Well, he was asked if Tom Brady has reached out with any advice for him as he prepares to play in his first Super Bowl as starting quarterback.

“He shot me a text, just ‘Good luck’ and everything like that,” Jimmy revealed. “‘Just go handle business.’ It wasn’t too complicated or anything, just ‘Go win.’”

If you don’t know…the Internet just realized that Jimmy G. is super hot and everyone is obsessed!