Whenever infielder D.J. LeMahieu has one of the performances the Yankees have come to rely on this season — a multi-hit game with several runs driven in — the tweet officially announcing his signing on Jan. 14 resurfaces as a playful reminder of how much has changed.

“Today, the Yankees announced that they have signed INF DJ LeMahieu to a 2-year contract through the 2020 season,” the first part of the Yankees’ tweet read.

The replies weren’t pretty. “Just gonna leave this here …” read one response, followed by a screenshot of LeMahieu’s statistics from last season that showed his struggles away from the hitter-friendly Coors Field in Denver. Another response read simply, “Lol.”

For many, including LeMahieu himself, his Yankees arrival didn’t quite make sense. They had plenty of infielders, including the All-Star Gleyber Torres at second base, the position where LeMahieu had won several awards for his defense.

“I definitely got a lot of texts, ‘Surprising sign,’” LeMahieu recalled recently. His friends and former teammates didn’t understand why he went to the Yankees.

LeMahieu has not only fit, he has emerged as the catalyst for the team with the best record in baseball entering Friday. His hitting prowess earned him the nickname The Machine, coined by catcher Gary Sanchez, and his defensive versatility rescued the Yankees through all of their injuries.

“He’s been one of the most valuable players in the league,” Yankees Manager Aaron Boone said earlier this month. “He’s been everything we could’ve hoped when we signed him.”

Entering a game Friday against his former team, the Colorado Rockies, LeMahieu led the American League with a .329 average. He has produced key hits in critical moments. When he started at second base for the A.L. during the All-Star Game earlier this month, it proved he wasn’t just a product of Coors Field.

The Yankees lured LeMahieu, the 2016 National League batting champion for hitting .348, to New York with a two-year, $24 million deal. That looks like a bargain now, yet seemed puzzling when the deal was made in the winter. 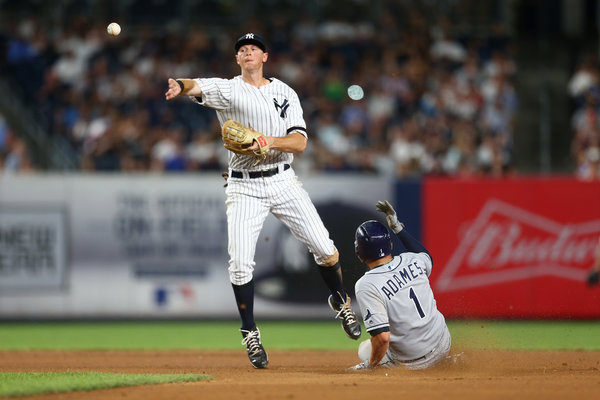 At the time, the Yankees already had Miguel Andujar penciled in at third base, Luke Voit or Greg Bird at first base, Troy Tulowitzki as a placeholder at shortstop until Didi Gregorius’s return from elbow surgery in the summer, and Torres at second base. But the Yankees, who only briefly considered Machado, knew that depth was vital — and they were later proven right with substantial injuries to Andujar, Bird, Tulowitzki and others.

LeMahieu, though, was a three-time Gold Glove winner at second base, so why would he give up excellence at one position for a multi-positional role?

“Winning a Gold Glove is cool,” said LeMahieu, who had occasionally played first and third base earlier in his career. “But I think showing up to the yard and knowing we’re going to win every day is a pretty good feeling, too.”

LeMahieu, 31, pointed to a deeper reason for his willingness to sacrifice the security of second base: the Los Angeles Dodgers. All those years of facing the Dodgers, who have won the N.L. West six straight seasons and appeared in the past two World Series, showed LeMahieu the value of versatility. The Dodgers’ rosters of late have featured Swiss-Army-knife-like players who can handle multiple positions and pose a daunting challenge to any team’s matchups.

“They weren’t made to just get to the playoffs, but win the playoffs,” LeMahieu said. “You bring in a new pitcher and they have a whole new lineup. It’s annoying to play against. But I saw how it worked there and I saw it as a similar situation here.”

Even though LeMahieu had the chance to play second base more often elsewhere, such as the Tampa Bay Rays, the Yankees appeared to have the best offer, according to Yankees General Manager Brian Cashman, and LeMahieu said he wanted to play for a team devoted to winning. No playing time was promised, LeMahieu said, but he trusted the Yankees.

“There are so many good players here and I just felt like I was going to fit somewhere or another,” he said. “I just didn’t know how.”

The Yankees bet that LeMahieu’s athleticism and drive would allow him to adapt to other positions without issue, and his high-contact approach was attractive for a home run-bopping team.

LeMahieu has displayed a little more edge than expected, from his emotion on the field to his comments off it. Earlier this season, Boone said opponents shouldn’t be fooled by LeMahieu’s quiet intensity. “He’s out there to rip your heart out.”

Before he could prove his worth in New York, LeMahieu needed to tweak his hitting. He was coming off a 2018 season in which he made three trips to the injured list and hit .276 in 128 games, his lowest totals in at least four years. And the difference between his hitting at thin-air Coors Field and on the road was more pronounced than in the past.

An underlying attribute bugged LeMahieu. Because he hit the ball hard yet at a low angle, LeMahieu said the Rockies suggested last season that he adjust his hitting angle to produce more home runs. He toyed with that and hit a career best 15 home runs, but felt inconsistent all season.

“What they were saying is true,” LeMahieu said. “But the best thing for me was that I came back this off-season and I said, ‘The hitter I was last year wasn’t me.’”

So he rededicated himself to being, above all, a tough at-bat for opponents, and using all fields. He is so dedicated to that ethos that he said it bothered him two seasons ago when opponents shifted their defense often against him. Last year, he pulled the ball to left field more than ever.

LeMahieu was reassured during his first conversation with the Yankees hitting coaches, Marcus Thames and P.J. Pilittere. They told him to be the best version of himself, hitting the ball to center and right fields, not necessarily over the fence. “That was the best thing I could’ve heard coming here,” LeMahieu said.

Thames said the Yankees didn’t want to change LeMahieu’s proven right-handed swing. All they did, Thames said, after examining past seasons was suggest that LeMahieu be more aggressive early in the count with runners on base. The result: entering Friday’s game, LeMahieu was second in the major leagues with a .439 average with runners in scoring position.

What makes LeMahieu one of the best at making contact in an era full of players using home run-focused, strikeout-prone uppercut hacks is his flat swing that sweeps through the strike zone. Any photo of LeMahieu mid-swing shows him dropping his right knee low to the ground.

“His barrel gets in the back of the zone early and it says in there,” Thames said. “I’m a big fan of guys using their lower half and he really uses it to the extreme.”

LeMahieu shrugged off questions about his swing, saying it had evolved over the years and that he didn’t think much about its mechanics. He said he didn’t know why he was hitting for more power this season — his launch angle (6.2 percent), slugging percentage (.508) and home runs (13 home runs through 87 games) are on pace to be career highs — beyond hitting the ball hard.

“I just feel like I’m in a good place right now and my swing is repeatable,” he said.

LeMahieu said his experience with the Yankees has been everything he hoped for, despite the initial skepticism.

“It wasn’t an obvious fit,” he said. “It just wasn’t. But it worked out and it’s working and hopefully it works out in the playoffs.”

And for those fans who have been teased since January for their disbelief, LeMahieu has indeed turned out better than everyone hoped.

“This is better than the best case scenario,” Sessa said in a telephone interview. “I’m never happier to have been wrong.”