A Wimbledon Rarity: A Late-Round Matchup Between American Men

WIMBLEDON, England — Matches between American men were once an unremarkable fixture of the latter stages of Grand Slam events, including Wimbledon. In the first 33 years of the Open era, from 1968 to 2000, American men squared off in the fourth round or later 72 times at the All England Club.

But it has not happened here since 2000. Tennys Sandgren and Sam Querrey will change that on Monday. Their fourth-round meeting will be the first match between American men in the second week of any Grand Slam tournament since the 2007 Australian Open, when Andy Roddick beat Mardy Fish in the quarterfinals.

Querrey booked his spot first, defeating John Millman, 7-6 (3), 7-6 (8), 6-3. Querrey, who beat the Wimbledon top seeds in consecutive years by ousting Novak Djokovic in 2016 and Andy Murray in 2017, had a strong start to this year’s tournament as well, eliminating No. 5 Dominic Thiem.

It has been especially impressive given his lack of match play this year after an abdominal injury forced him out of the European clay swing.

“Fortunately, the little injury was during the clay court season, which historically hasn’t been my favorite,” said Querrey, who reached the Wimbledon semifinals in 2017. “Here, I can jump right in and feel fine.”

Querrey, 31, has often had to answer questions about various nadirs in American men’s tennis during his career, but said it had not been a burden on his playing.

“It hasn’t affected me,” he said. “I haven’t thought of it. I don’t feel any extra pressure. Me and all the other guys are doing the best we can. Hopefully someone can get a final at a Slam — or hopefully win it — in the next few years, but it’s zero extra pressure for me.”

Querrey, ranked 65th, did express some satisfaction at being part of a milestone match.

“If three months ago you were like, ‘Oh, two American men will play in the second week of a Slam,’ you probably wouldn’t have said, ‘Querrey-Sandgren,’” he said. “It’s exciting. You’ve got one guy in the quarters.”

Some of the usual suspects advanced to the fourth round with ease on Saturday, including Roger Federer and Rafael Nadal, who both won in straight sets. 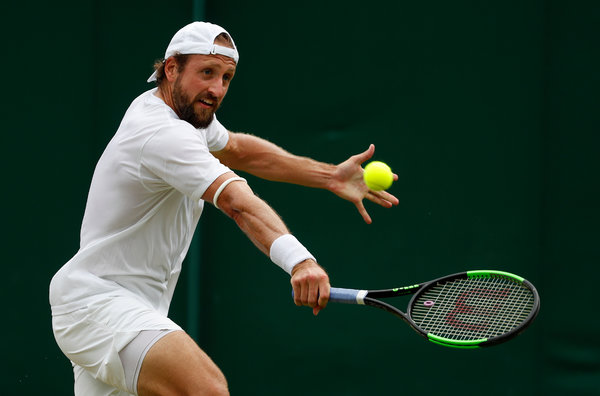 Sandgren, 27, had no history of grass-court success before this week. Wimbledon is only his sixth professional tournament on grass. He kept his composure and focus impressively to beat 12th-seeded Fabio Fognini, 6-3, 7-6 (12), 6-3.

No American man has made a Grand Slam final in a decade, since Roddick suffered a heartbreaking 16-14 fifth-set loss to Federer in the 2009 Wimbledon final. Before this drought, the longest gap had been three years, from 1986 to 1989. But for Sandgren, who made his own breakthrough run to the Australian Open quarterfinals last year, there are reasons for optimism.

“It’s definitely better than it was three, four years ago,” he said. “We have more guys pushing each other, and I think there’s always a chance that an American guy does make a run at one of these big events.”

Sandgren, ranked 94th, noted that the American men’s contingent was “missing somebody who is seriously contending for a Slam every time.”

Some of the players who have been considered options to do that have been derailed recently.

The top American man, 12th-ranked John Isner, lost in the second round in five sets to Mikhail Kukushkin of Kazakhstan. Wimbledon was his first tournament since he injured his left foot in March. Isner reached the semifinals at the All England Club last year, falling by 26-24 in the fifth set to Kevin Anderson after 6 hours 36 minutes.

Jack Sock, who broke into the top 10 in late 2017 and then plummeted precipitously the next year, has not played a tournament since January because of a thumb injury. His agent, Max Eisenbud, said Sock would return to competition this month at the ATP tournament in Atlanta.