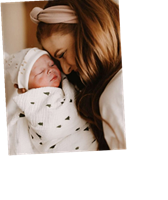 And blessed. And grateful. And excited and proud and simply euphoric over having two healthy young kids at home.

But she also feels a little bit of pain.

The 28-year-old author and podcast host shared a precious photo over the weekend of her, daughter Ember and brand new son Bode at the hospital, making two things clear to Instagaram followers in the process:

Here’s the special photo to which we’re referring:

And here’s the caption Audrey wrote alongside the snapshot on social media:

One of my favorite moments ever. Ember meeting Bode for the first time. She is just the sweetest big sister already.

We took some videos that I’m sure we’ll share in our stories soon. Jer and I can’t stop smiling and laughing at the things she says about him and to him. She’s so eager to take care of him and give him lots of lovies.

As a parent, there truly is nothing like witnessing one sibling embrace and care for another sibling.

However, here is how Audrey concluded her latest online message:

Postpartum has been hard on my body, but cuddling with these precious little loves makes my heart so full. What an honor it is to be their mama.

To be clear here, Roloff is not talking aboout postpartum depression. She’s not saying that she’s suffering from any mental health illness as a result of welcoming Bode into the world on January 7.

Instead, the former Little People, Big World star is simply admitting that her body hasn’t totally bounced back from giving birth just yet — which is obviously very, very understandable.

Audrey and husband Jeremy expanded their immediate family on January 8, two days after Audrey’s due date.

They announced their second child’s arrival via photos such as the one directly above, as well as a caption that read as follows:

Audrey gave birth to her firsborn, Ember, in September of 2018, sharing details back then of the medical struggles she faced and the troubles she experienced while breastfeeding.

“The first 24 hours with Ember were bliss, but after that it was as if I went back into labor again,” Audrey said about two years ago, adding that she she suffered from “severe engorgement, too much milk, not enough milk, blisters, bruises, clogged ducts, and mastitis.”

Mastitis is an inflammation of breast tissue that sometimes involves an infection.

This inflammation results in breast pain, swelling, warmth and redness. The new mother might also have fever and chills.

Despite these physical complications from motherhood, Audrey and Jeremy are clearly as content as two parents can be — and may even add to their brood down the line.

The Oregon natives told Us Weekly in April that they “always wanted to have a big family,” yet weren’t putting any pressure on each other.

“We don’t put a timeline or a number on it, but Lord willing, we definitely want to have more kids and we’ll take them one at a time,” Audrey told this tabloid.

With that in mind, click down below for a look at all the photos released so far of this latest one. He’s just so gosh darn adorable!