Home » Celebrities » Billie Lourd Is Engaged: Here's How She Met and Fell in Love With Her Fiancé, Austen Rydell

Billie Lourd Is Engaged: Here's How She Met and Fell in Love With Her Fiancé, Austen Rydell 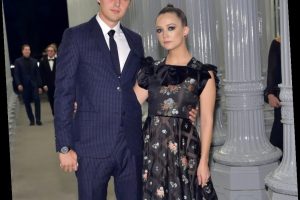 Billie Lourd said “duh” to being a Mrs.

The former Scream Queens star and her boyfriend, Austen Rydell, are now engaged, with Austen sharing the exciting news — and the actress’s acceptance — in an Instagram post on June 26. While it’s pretty evident Lourd and Rydell are head over heels for one another, there are some things about the couple’s romance people might not know, including how they met and how long they’ve been a couple.

How did Billie Lourd and Austen Rydell meet?

While it’s unclear how Lourd and Rydell met, People previously reported that the pair started dating in early 2016. However, after a short-lived romance, the couple called it quits for unknown reasons.

Later that same year, Lourd began dating her Scream Queens co-star Taylor Lautner shortly before her mother, Carrie Fisher, and grandmother, Debbie Reynolds, passed away within days of each other in December.

Lautner reportedly served as Lourd’s emotional support in the aftermath, and the pair went on to date for a few months before splitting in July 2017.

In late 2017, Lourd and Rydell reconnected, and since then, things have only continued to heat up between them.

RELATED: Despite Losing the Loves of Her Life, All of Billie Lourd’s Dreams Are Coming True

In December 2017, Rydell accompanied his leading lady to Norway to see the Northern Lights on the anniversary of her mother’s death, which Lourd documented on her Instagram.

After their trip, the couple began getting more comfortable showcasing their romance in the public eye. In January 2018, Rydell attended a red carpet event with Lourd, where they were spotted “kissing inside.”

The following month, the American Horror Story alum shared a slew of photos from her and Rydell’s trip to Disneyland with a couple of friends.

In April 2018, the couple took a trip to Japan together, and in July, Lourd proclaimed she was “obsessed” with Rydell after he surprised her with a trip to Las Vegas to celebrate her 26th birthday, according to MSN.

The couple’s rekindled relationship led to an engagement

Over the last two years, Lourd and Rydell’s romance has only gotten stronger, and they recently confirmed this notion by sharing an exciting announcement on Instagram.

On June 26, Rydell revealed in a post that he’d popped the question to Lourd and that she’d gladly accepted his proposal.

The couple’s engagement comes a few months after they shared sweet Valentine’s Day appreciation posts for one another on Instagram. “All ’round the world you make my world go ’round,” the actress wrote of her now-fiancé, while Austen called her “the best girl in the world.“

Congratulations to the happy couple!