How romantic! In place of their wedding vows, Blake Shelton wrote wife Gwen Stefani a song that he’s now released for the world to hear.

Blake Shelton, 45, is such a romantic! The country crooner revealed that he wrote wife Gwen Stefani, 52, a song in place of traditional wedding vows, dubbed “We Can Reach The Stars.” He performed the song at their July nuptials, but decided to release the song for the world as part of his upcoming project Body Language. “We always said we wished we’d met/Long before we finally did/But ever since that first kiss/Girl, it’s felt like we were kids and/Who are we to question/God and his greater plan,” Blake sang in the opening verse.

The Oklahoma native teased the track via Instagram hours before release. “Gwen and I decided we were going to write our own vows for the wedding, but I decided to surprise her by writing a song instead…,” he captioned a photo from their wedding on Thursday, Nov. 4 via Instagram. “#WeCanReachTheStars. Midnight. Pre-order #BodyLanguage (Deluxe) now,” he added teasing the upcoming album. Gwen looked gorgeous in her white Vera Wang wedding dress as Blake embraced her from behind in front of the stunning green trees on the country star’s massive Oklahoma ranch. 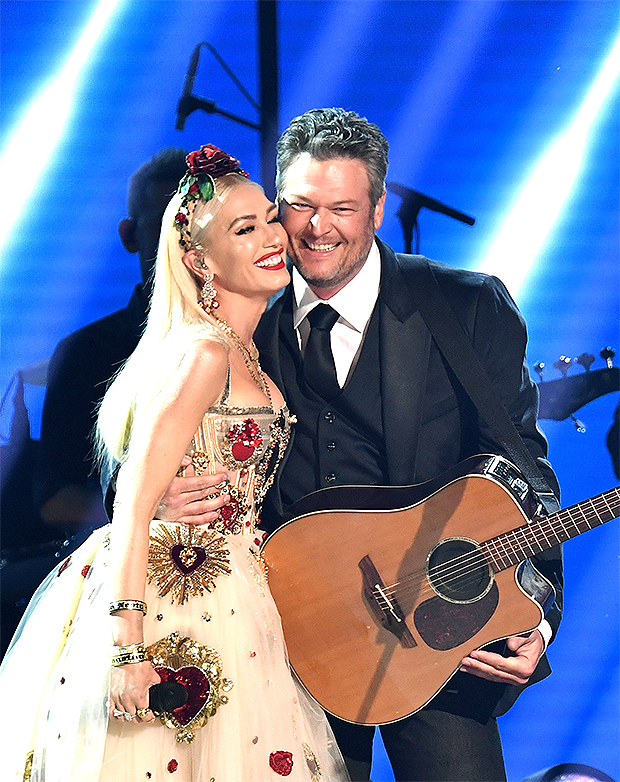 Their Voice co-star  Carson Daly couldn’t help but roast BFF Blake in the comments! “You didn’t decide to! I forced you to. Thank Jesus too, yielded the best wedding moment & a hit song! You should buy me a tracker w the royalties cowboy,” the former MTV host wrote back on the photo, throwing a hilarious jab.

Blake and Gwen finally tied the knot on Saturday, July 3 in an intimate ceremony that included their friends and family, including her sons Kingston, 15, Zuma, 12, and Apollo, 7 (who’s names she had sewn into her wedding veil). Carson officiated the couple’s ceremony, however, the No Doubt alum and “God’s Country” singer had already filed for a marriage license in the state of Oklahoma on June 29. While the filing didn’t make them legally husband and wife, it meant that the couple had to marry within 10 days per Oklahoma state law.