Bo Derek says she remembers Donald Trump doing a good job on the big screen when he briefly starred alongside her on “Ghosts Can’t Do It.”

In an interview with Yahoo! Entertainment, Derek said Trump did “great” in the 1989 film, which included a cameo where Trump played himself and flirted with her character Katie O’Dare Scott.

Their scenes largely took place in boardrooms in New York City, where Derek’s character, Katie, had been meeting rich colleagues of her deceased husband in order to carry out a nefarious plan.

“Looking back, I knew Donald Trump,” Derek recalled when speaking to Yahoo!’s Editor Ethan Alter. “We just got a call from a mutual friend saying, ‘Donald you know is looking to be in movies. And I know you’re making a movie now. Can you—is there a cameo you could put him in?’”

Derek went on to explain that she and her team agreed to put Trump in the film because they “were going to be in New York anyway.”

“We wrote a little scene,” Derek said. “And he was in the movie.” 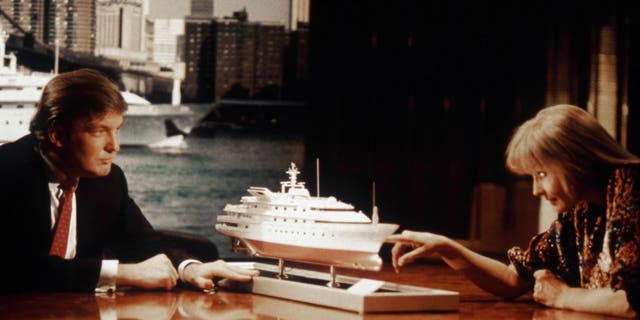 She noted that it took her a while to realize that the “mutual friend” she shared with Trump might have been Trump himself.

In her own words, Derek said: “And now, looking back on it, there was that time when he was – I believe he was pretending to be his own press agent and calling newspapers and magazines to get his named dropped in the social scene.”

Reports came to light in 2016 that Trump may have served as his own spokesman with the alias John Barron.

Besides Trump’s curious talent management team from the ’80s and ’90s, Derek told Yahoo! Entertainment that he did well in his first movie.

“He was great, and we wrote it to get in and out of his offices very quickly,” Derek shared. “He’d been a friend for quite a while.”