“My heart broke for @khloekardashian on last nights episode it gave my CRAZY PTSD ! It F**KING SUCKS finding out from news outlets & tabloids that your marriage and family life are forever ruined… and EVERYBODY knows it …” 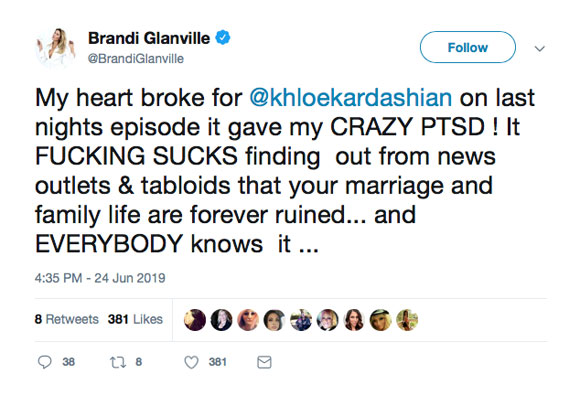 On Sunday’s episode of KUWTK, it was revealed Thompson allegedly expressed suicidal thoughts after news broke out about his cheating scandal.

“He’s like, ‘I can’t stop thinking about you and what mess I have caused’… He’s doing this to get a reaction out of me. Oh, so I’m just allowed to say ‘I’m going to kill myself’ at any time? That’s crazy.’”

Drama aside, Kardashian asked one of Thompson’s friends to check on him to make sure he was okay.

“The fact that Khloé is sitting here heartbroken but still worrying about Tristan’s feelings and the possibilities of him being upset or possibly hurting himself — I mean, it just goes to show that Khloé is an unbelievable person that loves so hard and so much… Somehow she just keeps getting the short end of the stick, and it’s unfair and it’s hurtful and it’s really hard for me to sit and watch.”

“I feel like I’m so heartbroken… Right now, I don’t feel much of anything. I’m in shock. This is a debilitating blow to my soul. It’s so humiliating, it’s hard. There are some days you just want to cry.”

Kardashian said later in the episode:

In an interview with Red Table Talk‘s Jada Pinkett Smith, Jordyn denied hooking up with Thompson, except for a goodbye kiss that he allegedly initiated.