Leonardo DiCaprio’s ex-girlfriend Camila Morrone was spotted moving into a new apartment in swanky Malibu following her shock split from the 47-year-old actor.

Earlier this week, the starlet was captured checking out the same apartment. 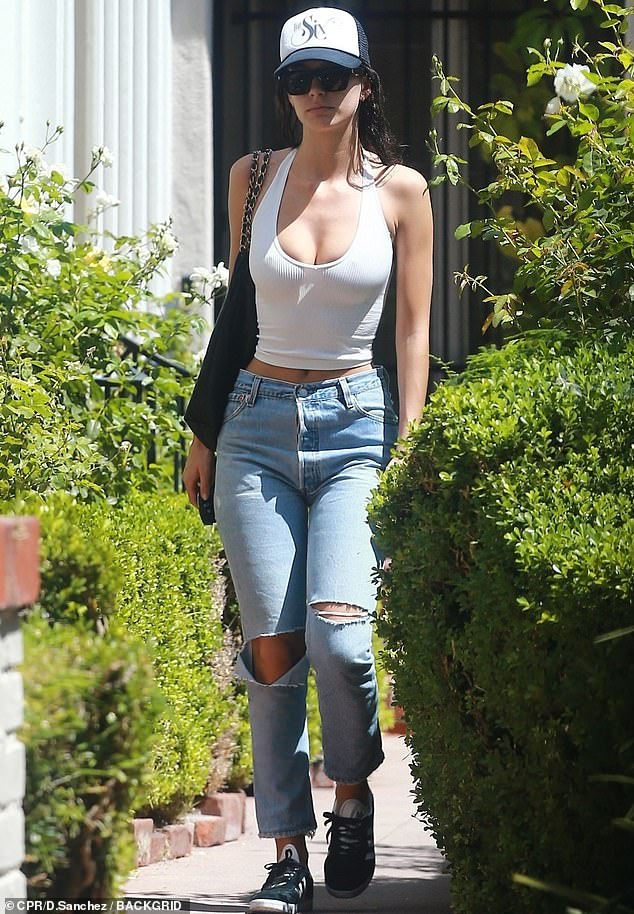 Moving on: Leonardo DiCaprio’s ex-girlfriend was spotted moving into a new apartment in swanky Malibu following her shock split from the 47-year-old Oscar winner 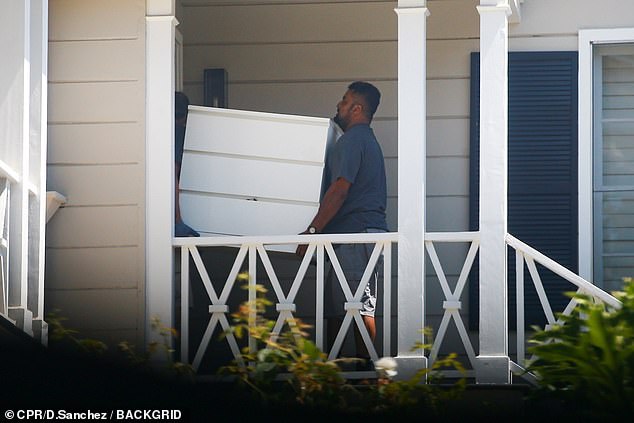 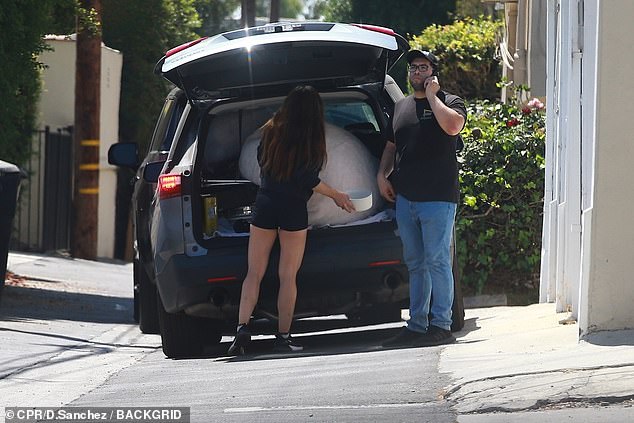 Supportive: Morrone was accompanied by a number of friends, who were eager to assist her 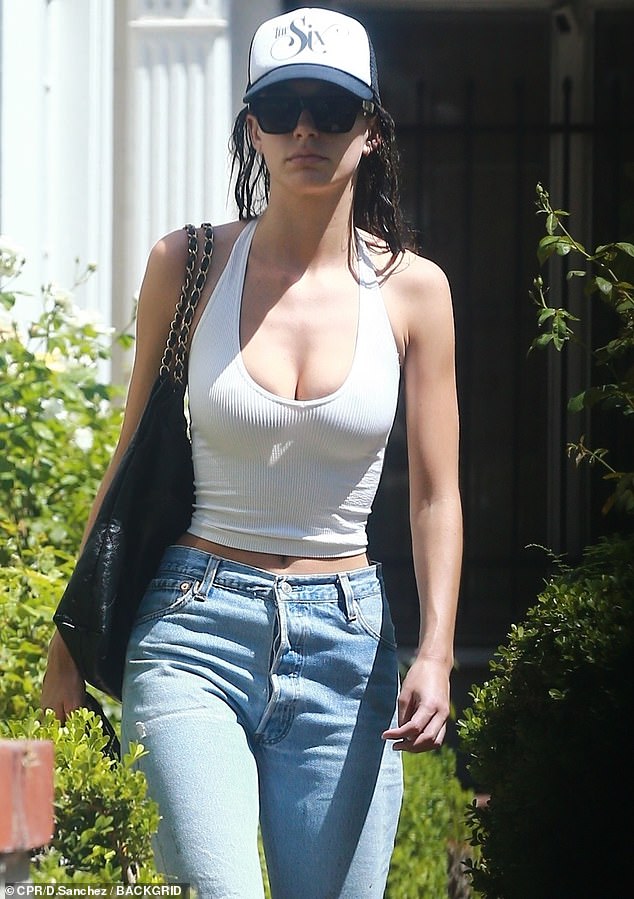 Casual: She sported a low-cut white tank top and jeans

Her sightings come amid reports that DiCaprio has been ‘partying every night’ since the split, hanging out with his ‘old crew and some girls’ according to Page Six.

He was snapped trying to keep a low profile at exclusive NYC nightclub the Ned NoMad on Tuesday night, donning a baseball cap and dressed in all black.

The club, owned by nightlife mogul Richie Akiva, opened its doors to exclusive members in Manhattan at the end of June.

The Wolf of Wall Street star reportedly partied with a squad of models, aged 21 and 23, at the Ned which includes access to a rooftob bar, terrace restaurant, 167 bedrooms and a Cecconi’s restaurant. 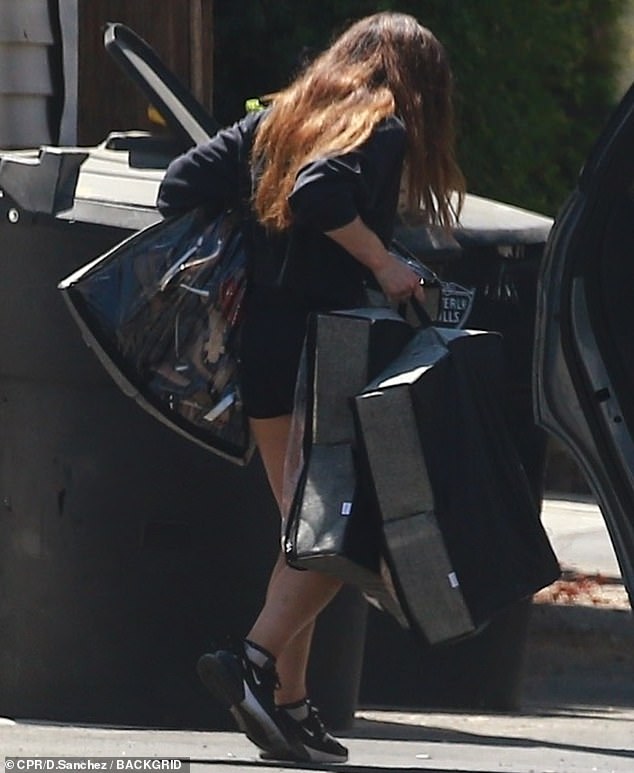 Elbow grease: Her friends were seen being admirably helpful during Morrone’s move 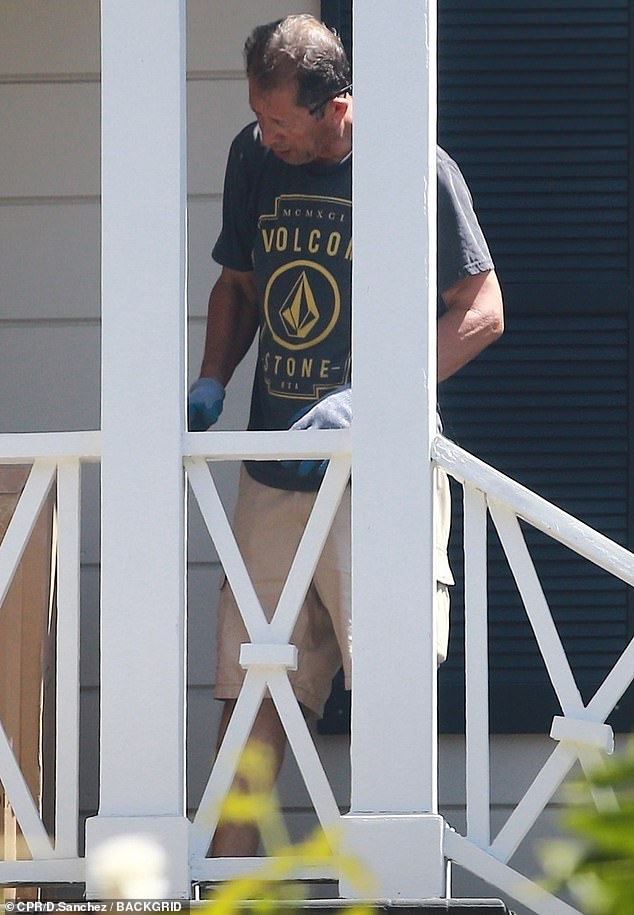 Helping hands: The starlet had plenty of assistance as she began her new chapter in her new home

Meanwhile Camila was spotted on Wednesday swanning around Malibu with a friend and checking out the apartment she was glimpsed moving into on Friday.

Camila and her new ex Leonardo, who is 22 years her senior, were reported on Tuesday to have ‘quietly’ ended their relationship earlier this summer, a source close to Leo claimed to The Sun.

The latest breakup seems to reinforce a pattern the Once Upon A Time In Hollywood star has established of never publicly dating a woman over the age of 25.

Insiders close to DiCaprio claimed to the publication that he and Morrone had been growing apart recently.

The look: Camila showed off her ample endowments in her plunging white top

‘Leo and Camila ended their relationship over the summer,’ a source said. ‘There are no bad feelings between them. It just came to a natural conclusion.’

Back in July, Leonardo had been photographed with the Ukrainian model Maria Beregova, who is only 22, during his trip to Saint-Tropez.

DailyMail.com revealed that Beregova had reverted to using her maiden name after divorcing her husband Abdelhafid, 30 — whose grandfather was a henchman of Libyan dictator Colonel Muammar Gaddafi.

The Ukrainian beauty began using her her maiden name again while on the trip, where she was pictured with the Django Unchained star. 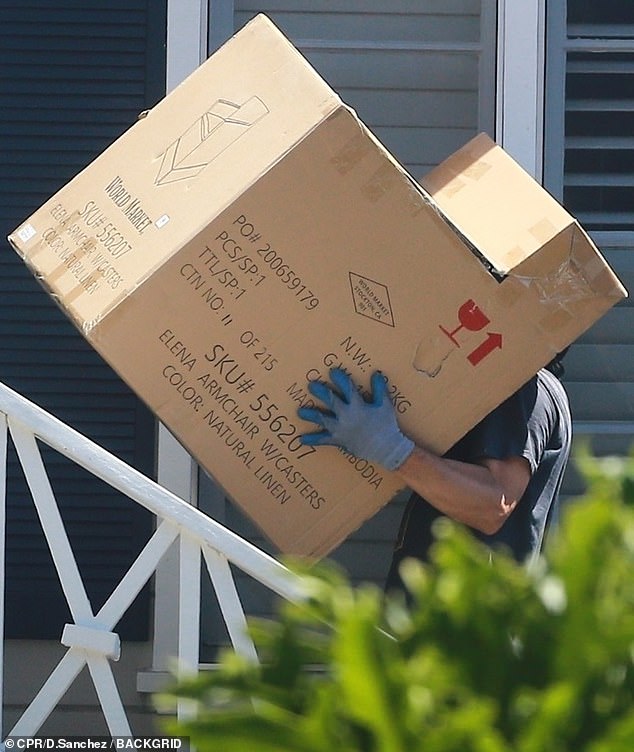 Hoist: One armchair in particular required some muscle to get into the buildling

Beregova was raised in Switzerland and attend an exclusive boarding school, but she is currently based in London and is studying to take over her family’s pharmaceutical business.

On the same trip, Leo was also spotted partying with his longtime friend Tobey Maguire. The Spider-Man star is part of DiCaprio’s famed ‘Pussy Posse,’ his group of male pals who partied with him throughout the ’90s.

The Revenant star was first introduced to Camila back in 2008, when she was only 12. 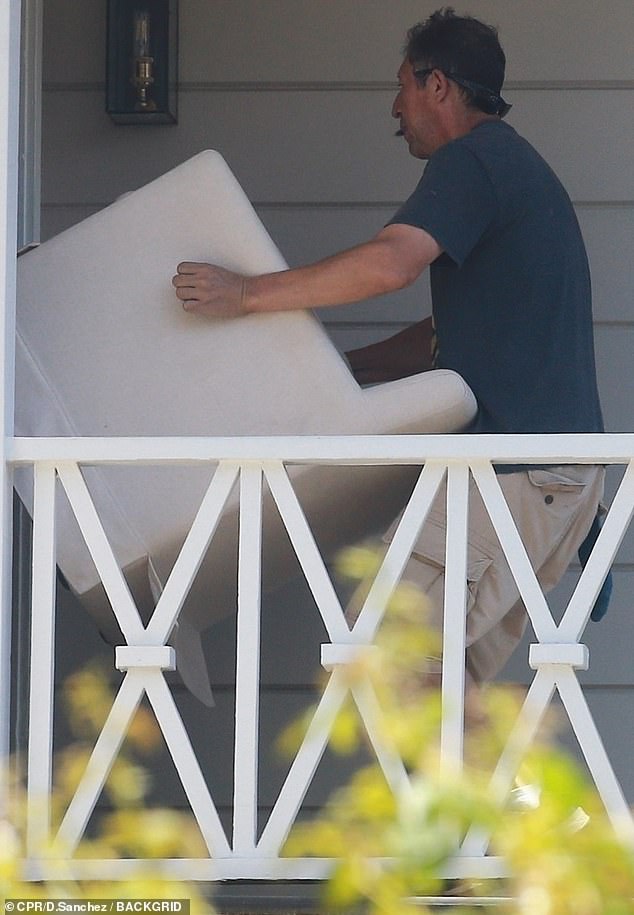 Off he goes: The chair was seen being maneuvered expertly up the stairs and into the apartment

His longtime friend Al Pacino, who had dated Camila’s mother Lucila Solá for years, made the introductions, and Leonardo apparently remained friends with the family for years.

Leonardo and Camila officially got together sometime in 2017, following his breakup with model Nina Agdal just days before the Cannes Film Festival, though representatives for both initially denied that they were together.

The two raised their relationship’s profile the following year, when they attended Ellen DeGeneres’ birthday party together, and they were seen later in the year showing off some PDA at Coachella.

Later in 2018, an anonymous source told People that the relationship had escalated in seriousness, as the two were ‘very in love and serious’ and ‘talked about getting engaged.’

The source claimed that Leo had ‘never loved a girl like this,’ and he was even considering having children with his new love.

In 2019, Leo’s commitment to not publicly discussing his relationship was tested when both he and Camila had films premiering at the Cannes Film Festival.

He represented his his Quentin Tarantino film Once Upon A Time In Hollywood, while she walked the red carpet for her acclaimed drama Mickey And The Bear, but the two didn’t walk together at either screening, and he didn’t identify her as his girlfriend at the festival.

Later in the summer of 2019, Camila reminded her fans of Leo’s penchant for dating young women when she posted a romantic photo of Humphrey Bogart and his much-younger wife Lauren Bacall.

‘A love like this,’ she captioned it, though many fans criticized her for dating a much-older man.

‘My god, people are so mean and full of anger with people that they know nothing about,’ she wrote in her Instagram Stories in response to the controversy. ‘I guess I just hope on this Friday that people learn to live with a little less hatred and place their time and interests elsewhere, because living without hatred feels pretty good.’

In 2020, they continued their pattern of walking red carpets separately, but they made their first public appearance as a couple when they sat together inside the Oscars ceremony that year.

By December, E! News reported that they had taken the major step of moving in together.

Throughout 2022, the couple were spotted being affectionate and were reported to be as strongly connected as ever. DiCaprio was even seen taking the dogs that Camila had fostered on solo walks, suggesting he considered himself a parent to them as much as she was.

In June, the Wolf Of Wall Street star was pictured on a beach outing with his father and Al Pacino, whom Camila considers to be her stepfather even after his split from her mother.

One of the last public sightings of the two appeared to be an outing at a beach in Malibu for the on July 3, though they were not pictured together at the time.

Now Camila appears to have joined the ranks of Leo’s ex-girlfriends, none of whom are known to have dated the actor past the age of 25.

Following news of his latest breakup, the Titanic star was mercilessly mocked on social media for seemingly only dating young women, particularly because his latest split appeared to come so soon after Camila’s birthday.

One fan tweeted: ‘3 things are certain in life: – death, – taxes, – Leonardo Dicaprio breaking up with his girlfriend before her pre-frontal cortex has fully developed.’

Another added: ‘May we all be as consistent as Leonardo DiCaprio, but about less creepy things.’

‘Leonardo DiCaprio is actually dating all the under-25s he possibly can to spread the word about climate change to those who will be the most impacted,’ a third joked.

At the Academy Award ceremony on March 27 of this year, co-host Amy Schumer joked about Leonardo’s penchant for only dating young women.

‘He’s done so much to fight climate change and leave behind a cleaner, greener planet… for his girlfriends,’ she joked.

But when she explained the genesis of the joke in April on The Howard Stern Show, Schumer revealed that the Aviator star didn’t mind her ribbing.