Catching Up With Usain Bolt

Will there ever be another track star like Usain Bolt, someone who commanded the eyes of 80,000 people whenever he walked into a stadium, then put on one spectacular performance after another?

It seems unlikely, though records fall and stars rise. Someone will eventually run the 100 and 200 meters faster than Bolt did. But will they do it with the same style and longevity?

Bolt is happily retired and pursuing the life of the global superstar — in short, being Usain Bolt. He was in New York City this week on behalf of a sponsor, Gatorade, speaking about the importance of hydration.

He still looks like he is no more than a few solid weeks of training from taking on the world again, though that isn’t going to happen.

In an interview, Bolt spoke about what it takes to be a champion sprinter, his flirtation with soccer and the chances that he will someday attempt a comeback.

This conversation has been edited and condensed.

Do you miss the competition?

That was my next question. I take it you don’t miss the training.

No, no. I still try to train to stay in good shape, but just the regular gym sessions. I don’t miss the training one bit.

So what do you do all day?

I stay busy. You see my work with Gatorade. I work with my sponsors. So that’s my focus right now. I’m trying to do different businesses. A school is opening that we are working in.

Will you go to the world championships this fall in Qatar?

I don’t know. I’m thinking about it. I might be busy around that time, but I am definitely going to the Olympics.

Who is the next great Jamaican sprinter?

I honestly don’t know. The ladies are doing really well. Shelly-Ann Fraser-Pryce is still doing well. Elaine Thompson is doing well. There’s the other one, Briana Williams. She ran close to the world record last month. The guys, I’m not sure who is going to step up. 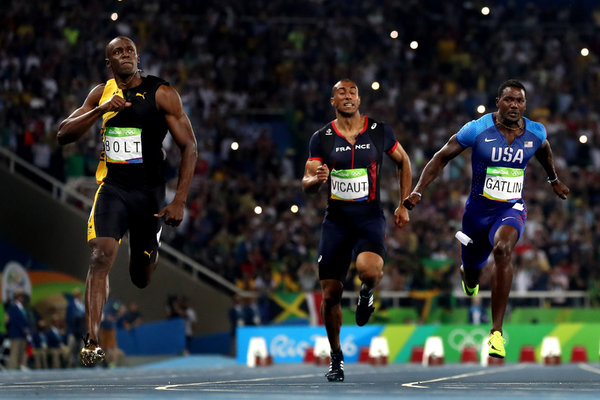 What about the Americans, or is there anyone else who looks like a special talent internationally?

Throughout the year I have always told people someone might be doing so well, but for me it comes down to the championships. A lot of people show up when it’s just a one-off, but when it comes to rounds and competition and mind-set that you need in the championships, you never know.

What about the American Noah Lyles? Have you seen him run?

Yeah, I’ve seen him run, I’ve seen him compete. Last season he was doing a lot of good things, this season he has started off good. But as I said, it all comes down to the championship. Is he confident to come into a race after running three races and show up? For me he has shown that he has talent, but when the championship comes, we will see what happens.

Will you ever coach?

No. I’m definitely not a coach. My coach said I could do it, but I don’t think I have the patience.

You don’t think people would listen to you?

It’s not about listening. I know what I put my coach through when I was going through my career, so I don’t think I could handle that.

You don’t think you could handle a personality like yourself?

You tried out for an Australian soccer club once. How is your soccer career?

I wanted to do that, but that didn’t work out, so I just decided to scrap it and focus on business and working with my sponsors.

Do you still play pickup games?

Yeah, definitely, we have a tournament, a six-a-side tournament that I play every Saturday with my friends.

So in Jamaica, every Saturday, you are playing soccer?

Yes, it just started. We play Tuesdays and Thursdays with all my friends, but this is like a tournament.

Let me guess: You are a striker.

No, I can play defense, if it is necessary, if they need me, because sometimes not everybody is available to play, and you have to be smart because we have a lot of strikers, so if we don’t have a lot of defenders I will play defense.

No interest in an American football career?

No, it’s something I never wanted to do because I have seen it. I am a Packers fan, so I do watch the game, and I see the hits these guys take. Because I am fast and I would be a wide receiver people would be gunning for me.

If you were talking to a 13-year-old who showed promise and had real sprinting talent, what are the three things you would tell that 13-year-old to do?

Is that a particular problem in Jamaica, where sprinting is such a big thing and everyone is obsessed with it?

Yes, I think so. It’s massive. At a young age, as soon as you get into high school, especially at the top high schools in Jamaica, they are doing track and field, and there is so much pressure. They have a thing called the Boys and Girls Championships. Everybody wants to win, so they put a lot of pressure on the younger kids to do well and perform. Sometimes they push them too hard. Back in my day, I was at a school that didn’t have a chance to win championships, so it was easy for me. There wasn’t any pressure. I just enjoyed it. I just would run and train, and that was it.

Zero chance of a comeback?

I’ve learned from many people: A comeback never works out well.