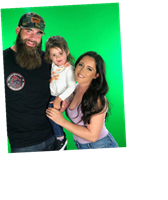 It’s been over a month since Jenelle Evans filed for divorce from David Eason.

Evans has used that time to relocate to a new state and begin the long process of rebuilding her reputation, while Eason is … well, as far as we can tell, he’s still living on Jenelle’s land and struggling desperately to make ends meet.

Jenelle is living in Nashville these days, roughly 600 miles from the home she shared with David in Riegelwood, North Carolina.

She has two of her three kids with her, while Eason is living on The Land with his eldest daughter Maryssa.

The Easons have one child together — 2-year-old Ensley — and for reasons that should be abundantly obvious, the little girl is living with Jenelle.

And of course, David is very, very unhappy about it.

Jenelle has a restraining order against David which prohibits him from contacting her.

But he’s still able to use social media to threaten and guilt-trip his ex.

David posted the above photo of Ensley over the weekend with a caption reading:

“The most precious sweet girl ever.”

Jenelle, meanwhile, was enjoying a Cracker Barrel Thanksgiving with her entire family in Nashville.

An employee of the restaurant posted the above photo, which was later retweeted by Jenelle.

“Hey [Y’all]! Got to take care of @PBandJenelley_1 and her family on my BUSY shift @CrackerBarrel in Nashville on Thursday, the server tweeted.

“Such an amazing nice family plus Barb was there  I hope my service was wonderful!”

Fans were ecstatic about the photo update, and they made their feelings clear in the replies to the tweet:

“Guys … look at those genuine smiles … ya [sic] girl and her kids look so legitimately happy, safe and at peace. Love seeing that,” wrote one fan.

“Great photo! They all look so much happier and healthier!!” another commented.

So it’s safe to say he took notice of Jenelle’s pic and was not happy with what he saw.

It’s worth reiterating that David wasn’t alone on The Land over the holiday weekend, as he still has primary physical custody of his 11-year-old daughter, Maryssa.

As for whether or not the Easons celebrated Thanksgiving, that remains a mystery.

Ne-Yo Confirms He and Wife Crystal Renay Have Split, Are Divorcing

Ne-Yo confirmed in an interview on Saturday, February 15, that he and wife Crystal Renay have split after four years of marriage and are getting a divorce. “It’s slowly but surely becoming public knowledge that myself and my wife have decided to go ahead and get a divorce,” the singer, 40, said on the “Private Talk With Alexis Texas” podcast. […]