MALIBU, Calif. — When Denise Richards first met with the producers of “The Real Housewives of Beverly Hills,” she wore a Guns N’ Roses T-shirt and ripped denim.

“They said I was the first one ever to come in not all dolled up,” Ms. Richards, 48, said as she melted into a plush gray chair at her husband’s office in Malibu, Calif., where he practices “frequency medicine” (alternative treatments that involve light and sound). The endless blue of the Pacific Ocean spread out through the window behind the actress, who was dressed again in casual-cool fashion: a Fleetwood Mac tee and jeans. 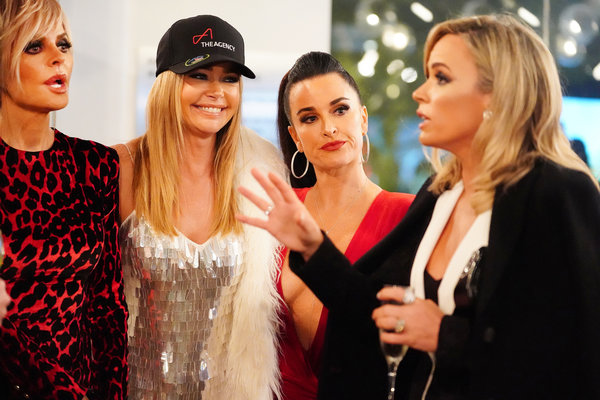 Though she has been famous for two decades, Ms. Richards is low-key as far as celebrities go. Just last year she wasn’t so different from the rest of us “Housewives” fans, tuning in each week from her couch, clad in cozy loungewear. (Name any Housewife, and she will tell you how much she loves her.)

Now Ms. Richards has seen the inner workings of the show and is happy to share some trade secrets. “Producers aren’t coming up to us saying, ‘O.K., why don’t you guys start talking about this and fighting about this,’” she said. “That doesn’t happen.”

And anyway, the conflicts make up a small part of the relationships between the Housewives, she said. Otherwise, “Why would we hang out with each other?”

For the most part, Ms. Richards has avoided the drama on which the show is built. With the help Lisa Rinna, a longtime friend and castmate, she has eased her way into the show’s social circle and avoided the season’s central conflict: the never-ending story line surrounding Dorit Kemsley giving away the dog she adopted from Lisa Vanderpump’s rescue center.

Ms. Richards has also been, as far as any of us can tell, genuinely herself. When the other Housewives don designer dresses, she shows up in a tank top and cutoffs (“I thought I was dressed up, wearing shorts that had crystals embellished on them,” she said. “But not dressed up for them.”).

And while some on the show shrink at the mention of their love lives, Ms. Richards has spoken frankly about her husband, Aaron Phypers, and their sex life. In one memorable episode, she said that she has sex with her husband every morning (which, good for them) and spoke glowingly about his physical endowment.

After several rounds of drinks, Ms. Richards couldn’t stop talking about it to Ms. Vanderpump and Kyle Richards while Mr. Phypers was sitting adjacent. Counting how many times Ms. Richards mentioned his body part in the conversation would have made a great “Watch What Happens Live” drinking game.

When Mr. Phypers pops into his office during the interview for this article, his jawline that of a Lifetime-movie villain, the scene comes immediately to mind.

“I think he was so shocked I said it in front of him,” Ms. Richards said of the onscreen discussion of his endowment. “It’s not such a bad thing.” Mr. Phypers chimed in, adding that after the episode aired, his 80-something office assistant, Peggy, said, “All right, drop ’em, let’s see this.”

When the cast took a camping trip on this season’s 13th episode, Ms. Richards revealed that she had gotten a “happy ending” at a massage and had paid for her husband to get one, too, after she learned he had never experienced one. The other Housewives had questions. Many questions. So many that the half the episode was dedicated to a conversation around “happy endings.”

That conversation did not touch on the fact that, in the United States, many such massage parlors are part of a multibillion-dollar sex trafficking trade that relies on immigrant labor. That conversation was left off the show or didn’t happen at all. (In a follow-up interview, Ms. Richards said, “It was a lighthearted conversation, and nothing inappropriate happened at a massage parlor.”)

Ms. Richards and Mr. Phypers further captivated the attention of “Beverly Hills” viewers when the couple planned a quickie wedding, sent invites by text message and got married in the space of two days. They had wanted to wed earlier, Ms. Richards said, but “circumstances just weren’t permitting.”

“Housewives” isn’t Ms. Richards’s first reality rodeo. In 2008, “Denise Richards: It’s Complicated” premiered on E!, chronicling her life as a single mother juggling her acting career in the wake of her tumultuous divorce from Charlie Sheen.

On “Housewives,” their co-parenting relationship has appeared candid and quite strong; Ms. Richards has been very determined to keep things positive for her children. But she admits it come in waves. “I just have to keep things very positive and very harmonious for the kids, and not let them be privy to any kind of discord between us,” she said.

She always includes Mr. Sheen when things have to do with their children. For instance, he was invited to Ms. Richards’s wedding in November 2018, and when Mr. Sheen arrived to Thanksgiving dinner a few years back with a prostitute in his car, Ms. Richards set a plate for her, telling her children she was a friend’s assistant.

“It was definitely not your traditional Thanksgiving situation,” Ms. Richards said. Looking back on their relationship, she said she couldn’t have imagined the direction their lives would take: “When I married Charlie, he had been sober for four years, he was in a very different place in his life.” But she’d rather not dwell on the subject.

While Ms. Richards has been working for nearly 30 years, and has appeared in films like “Starship Troopers,” “Wild Things” and “The World Is Not Enough,” she hasn’t appeared in many big-budget movies. Asked whether she thought there was a reason for that, personal or otherwise, she said: “I think there’s different choices,” and that there’s “nothing I would want to talk about publicly.”

“Choices were made, and that’s something that I would not want to bring up years later,” she added.

And anyway, she is just grateful to still be working. She recently starred in the soap opera “The Bold and the Beautiful” and has other shows and a feature film coming down the pipeline.

“Of course, would I love to do a big blockbuster movie or do movies that you get recognized for doing?” she said. “I would’ve loved to do some of those roles too. But, I feel very grateful and blessed that I’m able to continue working. I’m not 25, so to be able to still maintain and make a living my whole career, is something that I’m very grateful for.”

Ms. Richards recently shot the highly anticipated “Housewives” reunion, which began airing earlier this month. She was excited for her first reunion, which shocked the other Housewives. “I love seeing everyone, and I love our crew,” she said. “I’ve missed filming with the crew.”

In some ways, the end-of-season rite asked more of the women than the show itself: Ms. Richards said she was picked up at 6 a.m. to go to the set and didn’t leave until 9 p.m. She said she had to sit in heels and a gown all day with breaks only for the bathroom. The producers told her it was “the longest taping ever.”

“I would definitely go back if they officially tell us that we can,” she said.