In a testimony, a former aide to the White House chief of staff reveals that the then-president fought the head of his security and tried to grab the steering wheel of a presidential limo to take him to the Capitol during the insurrection.

AceShowbiz –Donald Trump wasn’t only aware, but he also wanted to lead the riot at the U.S. Capitol on January 6, 2021, according to a former aide. On Tuesday, June 28, the January 6th House Committee summoned Cassidy Hutchinson, who was a top aide to Trump’s then-White House Chief of Staff Mark Meadows, to testify on the insurrection.

In her testimony, Hutchinson made several shocking revelations, including how Trump reacted to the January 6 riot. She said the then-president was aware on January 6 people in the crowd had weapons and were approaching the Capitol without going through security.

Hutchinson said she overhead Trump respond, “I don’t f**king care if they have weapons. They’re not here to hurt me.” She went on to say Trump ordered the Secret Service to remove the metal detector from the area around his speech, presumably so armed protesters would be unfettered to approach the Capitol.

Hutchinson claimed Trump became “irate” when he knew he wouldn’t be going to the Capitol after his speech. “Once the President had gotten into the vehicle with [Head of Security Detail] Bobby Engel, he thought that they were going up to the capitol and when Bobby had relayed to him, we’re not,” she said. “The President had very strong, very angry response to that.”

She continued that Trump demanded to be taken to the Capitol. “The President said something to the effect of ‘I’m the F**king president. Take me up to the Capitol now,’ ” she testified. When the head of security told him he’d be taking him back to the West Wing, “[Trump] reached up towards the front of the vehicle to grab at the steering wheel.”

She added that Trump lunged at the head of security and attempted to go for his throat. “Mr. Trump then used his free hand to lunge towards Bobby,” she recounted.

The day after the insurrection, Trump’s advisors persuaded him to make public remarks to calm the country, according to Hutchinson. She said he agreed, but refused to characterize the riot as violent and blamed his VP Mike Pence instead. He allegedly said, “Mike deserves it,” presumably referring to the “Hang Mike Pence” chants during the riot.

Following Hutchinson’s testimony, Trump took to his Truth Social platform to deny her claims. “I hardly know who this person, Cassidy Hutchinson, is, other than I heard very negative things about her (a total phony and ‘leaker’),” he wrote. 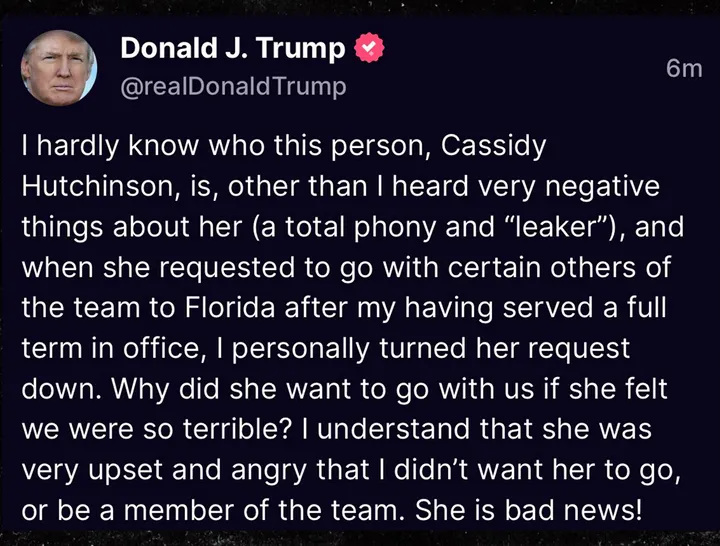 The 76-year-old went on suggesting that Hutchinson spoke against him because she was angry with him after being denied permission to travel with staff on a trip to Florida. “She is bad news!” he claimed.