Adonis is growing into quite a little athlete, and the rapper showed off that his son has found a love for basketball.

Nothin’ but net! Drake posted an adorable video of his son Adonis to his Instagram Stories on Wednesday December 29. The 35-year-old rapper was clearly proud of his four-year-old son making the shot. Adonis was also definitely satisfied with himself and looked really happy that he had made the shot.

Adonis, whom the rapper shares with Sophie Brussaux, looked adorable in an all-black athletic outfit. He sported a Nike t-shirt, which had the company’s slogan “Just Do It” printed across the front. He also rocked black sweatpants with a red stripe, and a pair of matching sneakers, along with his curly blonde hair. After he made the shot, his friend came back, and he gave his bud a big hug to celebrate him making the basket.

Of course, Adonis’ dad is a huge basketball fan, and it’s not surprising that he’s developing a love for the game. Drake showed his adoration for the game, especially his hometown team, the Toronto Raptors, when he attended plenty of games for the NBA finals back in 2019. Drake was super animated on the sidelines as he cheered on his favorite team, and thankfully, the Raptors ended up winning the championship. More recently, Drake has clearly passed on that love to Adonis, when they were spotted together, with the rapper’s son sporting a Lakers jersey. 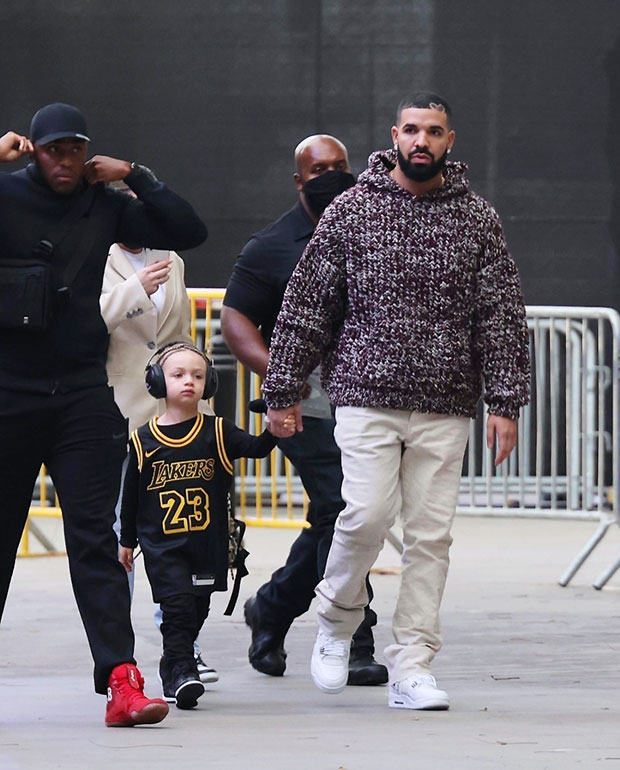 Drake — Photos Of The Grammy-Winning Rapper

Other than sharing a love of basketball, Drake has also shown off plenty more adorable moments of his son on his social media, and they seem like they have a close father-son bond. While Drake had been very private about his son in the past, he’s opened up a bit more and posted a few silly and sweet videos of Adonis. Earlier in December, Drake shared his boy snacking, while making hilarious goofy faces. On Christmas morning, the two had some fun and had some friendly wrestling. He was struggling to hold his camera in place, while the youngster jumped around in his pajamas.