At least two survivors of recent mass shootings in the U.S. are speaking out against Madonna’s latest music video, “God Control,” over its extremely graphic depiction of a nightclub shooting in an effort to advocate against gun violence.

Emma González, who has become an outspoken anti-gun activist after surviving last year’s shooting at her Parkland, Florida, high school, branded the video as “horrible,” “fucked up” and “triggering” for survivors like her in a tweet on Saturday.

González is featured on Madonna’s new album, “Madame X,” with audio of a speech she gave at a gun control rally in Fort Lauderdale included at the start of the track “I Rise.”

In her tweet, González also noted that the video’s release on Wednesday came just days after the anniversary of the June 12, 2016, shooting at Orlando’s Pulse nightclub in which a gunman killed 49 people.

Patience Carter, who survived that shooting, also branded the video as “really insensitive” while demanding an apology.

Madonna’s eight-minute video shows people being gunned down during a night of dancing. During one particularly disturbing 33-second scene, the music momentarily stops as people frantically scream while running and ducking for cover amid exploding bottles and bullet-riddled bodies. Madonna, wearing a blonde bob wig on the dance floor, dramatically gasps before being shot in her abdomen and falling to the floor.

“It was grossly accurate to what I actually witnessed that night,” Carter told TMZ of the video. “If I wasn’t as strong as I was, and I didn’t have as much [growth], I wouldn’t have been able to make it through the rest of the day.”

Though the video includes a “disturbing” content warning at its start, Carter said it should have been more specific to gun violence survivors and not just the general public. 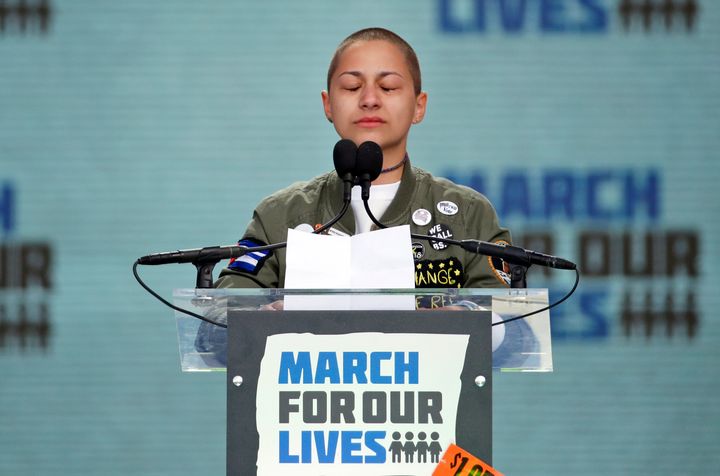 She repeated her opinion later on Twitter, USA Today reported, stating: “The Victims of these mass shootings should always be taken into consideration. I applaud the attempt, but I am truly disturbed.”

“I’m just glad that people like Emma are supporting us publicly,” Carter told HuffPost on Sunday. “Hopefully that helps apply some pressure for a real genuine apology, or any sort of acknowledgment at all that this affected us this way.”

Madonna, in the video’s summary, declares the piece to be a “wake up call” against gun violence.

“Gun violence disproportionately affects children, teenagers and the marginalized in our communities. Honor the victims and demand GUN CONTROL. NOW. Volunteer, stand up, donate, reach out,” the video’s description reads.

It goes on to promote nearly a dozen organizations that are working to help end gun violence.

One Pulse for America, which was among the organizations listed, expressed support of Madonna’s work in an email to HuffPost on Sunday, adding that in the past it has asked video contributors who wish to amplify their message through them to be mindful of the sensitivity around graphic depictions.

“In Madonna’s case, we made no such request, and we are not here to judge her decisions. That is the nature of artistic or political expression. Critics are free as well to point out their problems with her video, but there is no doubt she shares the same goal as we and even her critics do: reducing gun violence and drawing attention to the crisis,” said the organization’s co-founder, Jay Kuo.

“Madonna has always pushed the envelope with her videos. As she is an artist, we do not believe she is required to self-censor her work, and that she is also able on her own to defend her artistic choices,” Kuo added. “We are happy that she donated to the cause, and believe her voice is another important one in this fight.”

The National Coalition Against Domestic Violence, also among the organizations listed, praised Madonna’s video in a statement on Wednesday, calling it a “visually-arresting video” that juxtaposes “unbridled freedom of dancing in a club with the brutal and silencing violence wrought by an intruder brandishing a gun.”

“We are so pleased to have Madonna support our organization and bring awareness to the often and sometimes lethal intersection of firearms and domestic violence,” said Ruth M. Glenn, the group’s president and CEO. “In partnership with Madonna and others we will continue to raise awareness on the issue and the need for preventing, disarming domestic violence and what we can to reduce homicides.”

Carter said Madonna had not responded to her request for an apology as of Sunday afternoon. The singer had also not publicly responded to González. A representative for Madonna did not immediately respond to a request for comment.