Late Thursday, the reality star posted a photo of herself wearing a black-and-white “Vote Kanye” hat to her Instagram Stories with a “Swipe Up” link to her lifestyle website, Poosh. In the article, titled “Where to Buy the Best Voter Merch,” Kourtney encourages fans to “show your support for the 2020 election.” The article highlights a number of voter-themed clothing and accessories, including the “KANYE 2020 VISION DOUBLE LAYERED HOODIE,” with a link to “shop more Kanye merch.”

In another post shared to her Instagram Stories, Kourtney posted the same pic of herself in the hat, this time tagging Kanye and accompanying it with the direct link of where to buy the $40 hat — Kanye2020.country, which is the rapper’s official presidential campaign website. Earlier this month, Kourtney also retweeted Kanye’s first official campaign video. 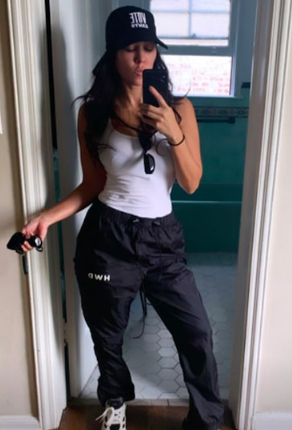 Despite the fact that Kanye is family (he’s married to Kourtney’s sister, Kim Kardashian West), many fans were taken aback by Kourtney’s decision to endorse Kanye for president. Many argued on social media that voting for Kanye — whose name will only appear on the ballot in 12 states — takes away from the two candidates who actually have a shot: Joe Biden and Donald Trump.

“Wow! Kourtney, I thought that you were the only Kardashian that may have a little bit of intelligence. I was wrong!” one person tweeted. “It’s all about the $ 4 U 2. A vote 4 Kanye is a vote 4 Trump. You only care about the tax breaks & stimulus checks. You are a multi millionaire w/out a conscience. Sad 4 your kids.”

“Kourtney Kardashian posting an insta story to her 102 MILLION followers encouraging them to vote for Kanye is one of the most irresponsible, egregious and reckless uses of that family’s platform that I’ve ever seen,” another argued.

It appears Kourtney is the only member from the Kardashian-Jenner family to publicly endorse Kanye. While Kim has encouraged her fans to vote across her social media platforms, she has yet to endorse a specific candidate.

Hear more in the video below.