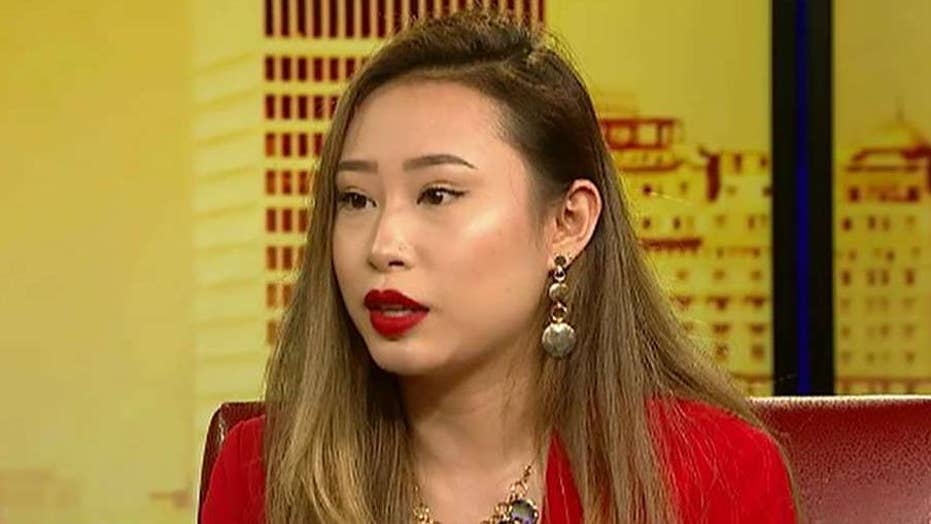 The 20-year-old beauty, Kathy Zhu is fighting back after being stripped of her&nbsp; title and dismissed from the Miss World America pageant; Matt Finn reports.

Miss Michigan World Kathy Zhu is speaking out after the Miss World America organization stripped her of her crown on Friday, saying it was made aware of a number of controversial tweets following her victory.

Kathy Zhu, a 20-year-old political science student and president of College Republicans at the University of Michigan, is now going public with emails and texts she exchanged with officials from Miss World America, and spoke with Fox News on Monday about the negative and positive responses she has received.

“When conservative media first took the story, there were a lot of positive responses, but ever since the liberal media took everything and basically smeared my name there was negative backlash,” Zhu told Fox News. “But that is minor to all the positive feedback I’ve gotten.”

The beauty queen insists her nationality, and the fact that she’s a minority, have functioned as a battery energizing liberals who are upset with her conservative political views; she said the left has a difficult time accepting the idea of a conservative minority.

“Yeah, I think that’s a big factor, only because I feel the left has a hard time understanding that minorities can be conservatives, too," she said. "And I feel like that was a big trigger for them, especially going through my accounts and seeing me wearing the MAGA hat – I feel like that’s what really upset them,"

Zhu, talking about judgments made over social media postings, said she feels everyone has the ability the change and shouldn’t be characterized by their pasts.

Zhu said she has received criticism from students on her own college campus, though she found irony in having a trove of accusations of racism levied against her by liberals, even as many of the same people hurled offensive and insensitive epithets back at her in their attacks.

“My friends have been texting me saying that they’ve heard people talking about it in their classes or their work. A lot of people know about it, so it has been a little weird walking on campus knowing that people are more familiar with the situation and having things misinterpreted,” said Zhu.

“Because headlines are very short and most of them say, ‘Miss Michigan racist,’ so it’s super inflammatory. But I’ve also gotten … backlash from the left criticizing me of being racist, but they used racial slurs against me.”

The college senior said Miss World America should have been aware of her political affiliation, considering she provided the organization with a list of all of her social media handles during the vetting process.

"They never even gave me a chance to confirm it myself, they just completely accused me – then they sent me the email two hours later about de-crowning me.”

Asked what she hopes people take away from her situation, Zhu said she simply wants to foster a conversation surrounding political and societal issues.

She also hopes that one day that talk can occur in a less volatile forum.

“The situation was a negative one for me in the beginning, but afterward it turned into a positive thing because I’ve gotten a lot more support and attention to my views and opinions online,” said Zhu. “I’ve always wanted to be a full-time political commentator or a news host, so this really brought conservative voices and attention to what I believe in.”

Zhu said that through it all, she stands behind her views and the way she handled the situation: “I stand by all of the tweets that I tweeted out from my Twitter account, but I don’t think that any of them were remotely racist or insensitive. I just think I presented the facts and presented my own opinion of things."