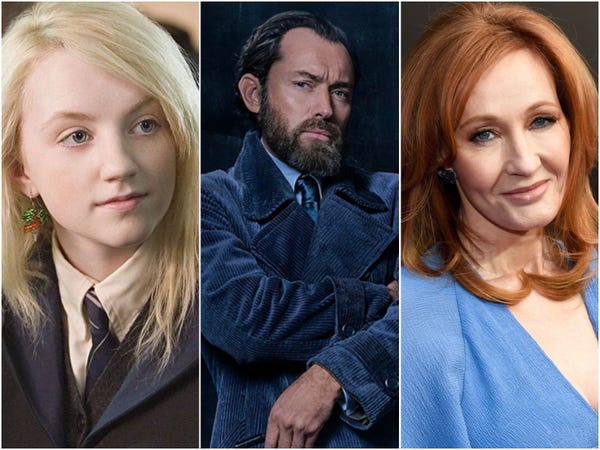 "Harry Potter" star Evanna Lynch told Insider that JK Rowling revealed Dumbledore's sexuality well before it was announced, and that she likes how the author has handled his relationship with Grindelwald in "Fantastic Beasts."

Lynch, who plays Luna Lovegood in the series, was speaking to Insider about her campaign with PETA against John Hopkins University, who are performing experiments on owls as part of its research on ADHD.

During the discussion, Lynch told Insider that she was informed of Dumbledore's sexuality quite early on: "Years before the Grindelwald franchise, she told me he was gay, and years before it was even announced, she told me that he was gay."

Lynch said that she was "trying to ship Luna with someone" during a conversation with Rowling before "The Deathly Hallows" had come out in 2007. Lynch said she asked Rowling: "'Can Luna be with someone like Dumbledore, can you make someone like that?' And she was like, 'No, I don't think so. I really think Dumbledore would be gay.'"

Dumbledore's sexuality was first revealed in 2007, although him being gay was never stated or referenced in any of the books or the movies. This lack of clarity has led some fans to criticize the author, who has recently found herself at the center of a storm following her controversial comments about trans people.

Fans argued that it was easy for Rowling to throw out the fact that Dumbledore was gay, but that she never actually bothered to make that canon in the books or movies. This led some to believe that Rowling was trying to retroactively make her books more inclusive than they perhaps are.

But Lynch insists that this is not the case at all: "So people saying, 'Oh, it's just exploitative. It's just trying to get on the woke train.' It's absolutely not. I think it was such an integral part of his character that she thought deeply about, and I think they're handling it sensitively cause she doesn't want to sensationalize it."

Lynch, of course, is referring to the gay relationship between Dumbledore and Grindelwald we briefly saw in a flashback in the "Fantastic Beasts" sequel, "The Crimes of Grindelwald."

Jude Law and Johnny Depp played Dumbledore and Grindelwald, respectively, in this movie, but it was the young version of both characters that we saw share an intimate moment during the movie. Law's Dumbledore looks into the Mirror of Erised, which shows the user their heart's deepest desires, where he saw his younger self hold hands and make a blood pact with a young Grindelwald.

This moment served as a suggestion of the love between these two characters, but was a less than an explicit declaration of it, too — which is what some fans desperately wanted.

'I don't want him to emerge in rainbow flag robes'

Lynch understands this and told Insider that she "hopes more happens" in future films, but believes that Rowling is right in her approach to Dumbledore's sexuality.

"It's not about Dumbledore coming out and being a huge gay icon. Because that would kind of be reductive. It would be reducing him down to his sexuality, whereas I think it's more interesting if it's like, this is a person who happens to be gay and this is not a defining characteristic," Lynch said.

"I don't want him to emerge in rainbow flag robes and be like 'I'm finally liberated,' that would sensationalize it. So I think it has to be handled with delicacy, which JK has. She's always known that he's gay. It's not something that she hastily added onto his character in an effort to be more inclusive. She's just always known and I liked that."

Lynch also said that audiences should remember the specific point in the story we are at in "The Crimes of Grindelwald." Dumbledore has already had and ended his relationship with Grindelwald, and the two are now estranged enemies, so any memories of Grindelwald or love Dumbledore still has for him is painful for him.

Therefore, we aren't going to see reels of footage of Dumbledore remembering his relationship with Grindelwald because he likely doesn't want to. The fact that they were in love, however, is "important for Jude Law to know," said Lynch.

"It's very important for Jude Law for him to know that Dumbledore was actually in love with this man, as I'm sure he's aware. That he's never had a relationship or an equal like that. I hope more happens [in future films]," Lynch said.

"I'm sure JK is aware of this, but there is a lack of representation for the LGBT side. I would like there to be more in her writing if she returns to the Wizarding World."