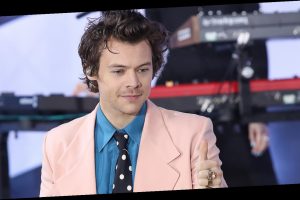 Harry Styles is updating fans on how he’s doing during his self-isolation amid the ongoing global health crisis.

The 26-year-old “Adore You” hit-maker checked in with Zane Lowe on his Beats 1 show via FaceTime to share how he’s coping with the current situation and the ways he’s keeping busy.

“If you’re in your house, you get to remove from it a little bit,” Harry told Apple Music about maintaining perspective. “But you get that humbling moment where you remember this is a very serious thing. It’s important to have conversations with friends, laugh, and have those happy moments right now…that’s the stuff that will get you through everything. It’s a time when everyone is on pause and gets to have a minute to reassess.”

Harry mentioned that he’s been staying creative by playing the piano, guitar, and writing poems and lyrics: “I’ve been writing so much. I think you just naturally, if you’re in this kind of situation, you find yourself just at instruments so much. You know?,” he said. “To be honest, I’m doing some of the stuff that I should be doing more often anyway, probably I should be playing the piano more. I should be playing the guitar more. I should be writing poems and lyrics more. So I’ve been doing a lot of that. And yeah, I think trying to allow the moments of happiness and just try not to make it feel like the world is ending so much. I think it’s important to have conversations with friends and laugh and have those moments right now. Because I think ultimately those are the things you’ll ultimately take from it. And that’s the stuff that I think will get you through everything.”

Harry on having to postpone his tour: “Yeah, we were hitting the road in a couple of weeks. Well, it’s kind of one of those things where it’s obviously disappointing, you get ready to play shows, but ultimately it’s not the most important thing,” he said. “And also, it’s not like we’re being singled out. It’s kind of across the board. Everyone’s shut down so it doesn’t feel so, woe is me, why is this happening to me type thing. So we’ll take the rest and try and be positive and productive and then we’ll be ready to go whenever the time is right and it’s safe. But yeah, it’s an adjustment because obviously there’s all the crew and stuff and everyone who’s ready to go. But we’ll just wait it out and whenever it’s safe to do so and people are ready to go to shows again, we’ll start doing it.”