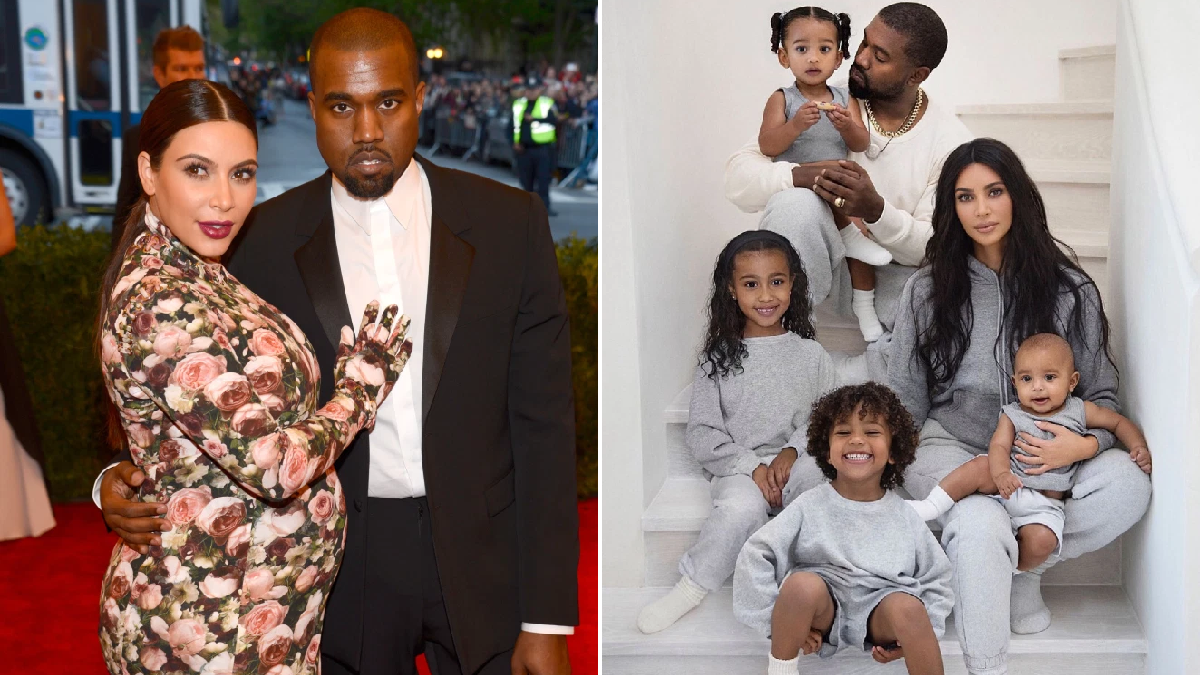 Kim Kardashian and Kanye West’s marriage has been thrown into the spotlight this week amid reports the reality star has ‘filed for divorce’ from the rapper.

The 40-year-old was seen without her wedding ring, amid speculation that their six year marriage is over.

An insider told TMZ that the Keeping Up With The Kardashians star has filed documents, but proceedings are ‘amicable’ between the pair.

The publication states Kim is asking for joint legal and physical custody of their children – North, Saint, Chicago and Psalm – with a source claiming Kanye is ‘fine’ with the arrangement, and is ‘committed’ to co-parenting their brood.

Kim’s lawyer, Laura Wasser, has allegedly filed the papers, which are said to state that neither party is contesting their existing pre-nup.

As Kim and Kanye’s relationship faces scrutiny, here’s a look back at where their love story began.

In 2010, the Gold Digger rapper made a surprise cameo on Kourtney & Kim Take New York, a spin-off of Kim’s staple family reality series Keeping Up With the Kardashians.

Wearing a smart black blazer and shades, Kanye stops by her Dash store in the city to catch up with the woman he’d had a big crush on for years.

In a confessional, Kim said in the episode: ‘Kanye and I have been good friends for a long time.

‘He’s someone that we definitely respect his fashion taste and his style and so we wanted him to check out the store.’

Kanye’s hopes of wooing Kim were blocked when she tied the knot with NBA star Kris Humphries in 2011.

However, the marriage famously lasted just 72 days and she began dating Kanye several months after parting ways with Kris.

Recalling the moment she fell for Kanye, Kim said in a previous episode of KUWTK: ‘After my breakup, I was feeling really low and down and [Kanye] said, “Just come to Paris and see my fashion show”, he jokes that he put on this whole fashion show just to get a date with me.

‘So, I went there and I stayed with him, and that’s where we started dating. I swear from the moment I landed, I fell madly in love with him and I thought, “Oh my god, why didn’t I do this sooner?” Like, this is what real life is like — love and fun and real support.’

In 2012, Kanye broke the news that Kim was pregnant with their first child.

She later confirmed it on Twitter, writing: ‘It’s true!! Kanye and I are expecting a baby. We feel so blessed and lucky and wish that in addition to both of our families, his mom and my dad could be here to celebrate this special time with us.’

Lo and behold, it was a girl and Kim gave birth to daughter North West in June 2013.

In October, just a few months after welcoming their first child, Kim proposed and asked Kim to marry him.

Of course, this is Kanye so nothing is done in small measure so he hired the AT&T baseball stadium in San Francisco with Kim’s friends and family present.

Fans also got to see the special moment as it was filmed for KUWTK.

In May 2014, the couple flew their loved ones out to Florence, Italy to tie the knot in front of a flower wall which pretty much started that trend.

It was a long week of celebrations which included a rehearsal dinner at the Palace of Versailles.

However, the event was also marred by controversy as Kim’s brother Rob Kardashian refused to attend despite flying out to Europe, while Kanye’s close friends Jay Z and Beyonce were MIA.

The couple welcomed their second child, and first baby boy, in December 2015.

Following in the tradition of their quirky monikers, they named him Saint West.

After living with her mother Kris Jenner for some time, Kim and Kanye finally bought their own pad, moving into a sprawling $60 million (£47 million) mansion in Hidden Hills, California.

The property’s minimalist decor has been subjected to much mockery and memes but Kimye clearly love it.

Kim is robbed in Paris and Kanye taken to hospital

The KKW Beauty founder experienced a terrifying ordeal when she was robbed at gunpoint during Paris Fashion Week.

Kim recalled how she was dragged out of bed and left tied up in a bathtub as the thieves made off with the star’s expensive jewellery including her £3.9 million engagement ring.

In November that year, Kanye was admitted to hospital for treatment for reported ‘temporary psychosis’ following an on-stage rant. He was forced to cancel the remaining dates on his Saint Pablo tour.

In 2018, Kim used a surrogate to conceive her third child after suffering difficulties when delivering North and Saint.

Opening up about her experience using a surrogate, Kim explained: ‘I am so thankful for my beautiful kids, no matter how they came to me — they came to me.

‘I’m so thankful for surrogates. I’m really thankful for my family. I grew up with so many siblings. I just loved being in a big environment. I would have gone through the same pain and back for the result of having my babies. It was all worth it.’

In May 2020, Kimye celebrated six years of marriage by spending quality time together as a family on their ranch in Wyoming.

Kim shared a touching post about her husband on Instagram and said: ‘6 years down; forever to go Until the end.’

Shortly after Kanye announced that he was running for President, he held a rally in South Carolina in the summer, where he opened up about their marriage.

Talking to the crowd, he disclosed that he and the reality star had considered having an abortion when she fell pregnant with their first child North.

Overwhelmed with tears, he told the audience: ‘I almost killed my daughter.’

Recalling the moment he and Kim thought about abortion, Kanye explained: ‘I remember that my girlfriend called me screaming and crying, and I was just thinking, because at that time I was a rapper I was out there, [had] different girlfriends and everything… and she said, “I’m pregnant”. And I said, “Yes!” And then I said, “Uh oh”.

‘She was crying… and for one month and two months and three months, we talked about her not having this child. She had the pills in her hand.

‘I’m in the apartment where my wife was actually robbed, and I have my laptop up and I have all of my creative ideas, I’ve got my shoes, I’ve got my next song cover… and the screen went black and white. And God said, “If you f**k with my vision I’m gonna f**k with yours”.’

He later said: ‘Even if my wife wants to divorce me after this speech she brought North into the world even when I didn’t want to. She stood up and she protected that child.’

Kanye shared a string of worrying tweets in July, before quickly clearing all trace of them from his profile – stating that he had been trying to divorce Kim for years.

In messages that have now been deleted, he posted that he wanted to separate from his wife ever since she allegedly met with rapper Meek Mill at a hotel, for a discussion on ‘prison reform’.

‘I been trying to get divorced since Kim met with Meek at the Warldolf for “prison reform”,’ he penned last year.

Kim took off her wedding ring after reports emerged stating that she was divorcing the rapper, in January 2021.

‘They are keeping it low-key but they are done,’ a source claimed at the time. ‘Kim has hired Laura Wasser and they are in settlement talks.

‘Kim got Kanye to go up there [Wyoming] so they could live separate lives and quietly get things sorted out to separate and divorce. She’s done.

‘Meanwhile, Kanye is talking about running for president and saying other crazy s**t, and she’s just had enough of it,’ they added to Page Six.

Kim and Kanye have not spoken publicly over the claims.