Home » Celebrities » Inside The New Threats Thomas Markle Has Made

Inside The New Threats Thomas Markle Has Made

It looks like Meghan Markle’s father, Thomas Markle, has landed another television interview, this time with Australia’s “60 Minutes.” This certainly isn’t the first time that Thomas has spoken out about his daughter, and it probably won’t be the last. During her sit-down with Oprah Winfrey that aired back on March 7, Meghan revealed the real reason that she no longer speaks to her father. She accused him of lying to her about his relationship with the press, and she cut him off — to protect her family, according to CBS News.

Just after Meghan and Prince Harry’s interview with Oprah aired, Thomas made an appearance on “Good Morning Britain” to share his side of the story. He basically said that he has apologized to his daughter several times, but that she won’t give him the time of day. “Bottom line is I’ve never heard back from Meghan or Harry in any way shape or form. When they say I’m taking advantage of the press, basically what I do is, I do a story for the press. If I don’t hear from them in 30 days, then I do another story for the press,” he said, according to CBS News.

Now that Meghan and Harry have welcomed their daughter Lilibet Diana, Thomas appears to be trying to get their attention once more, but this time? He’s making threats. Read on to find out more. 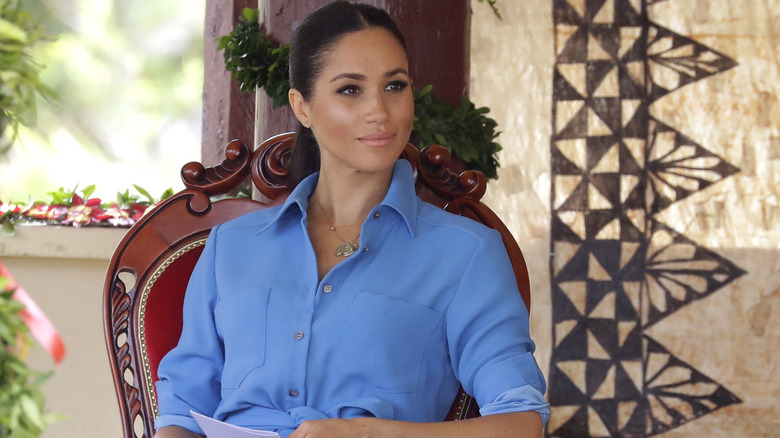 Thomas Markle released a statement shortly after the birth of his granddaughter, Lilibet Diana. “I am very pleased with the announcement of the safe and healthy delivery of my new granddaughter, and I wish her and her mother all my love and best wishes,” he said, according to the Daily Mail. Thomas really wants to meet the newborn (he has never met Archie who is now 2-years-old) and he is pulling out all the stops in hopes of getting a response of some kind from Meghan Markle and Prince Harry. “I haven’t spoken to [Meghan] since two days before they got married,” Thomas says in the trailer for “60 Minutes Australia.” When asked how he learned that Lilibet was born, he said he “heard it on the radio.” He goes on to say, “I’ll be very disappointed that I don’t get to hold my granddaughter.”

However, Thomas goes even further, promising to spill some personal information. “You want dirty laundry? This is the first time I’ve ever discussed these things,” he says in the clip. The episode of “60 Minutes Australia” featuring Thomas is scheduled to air on Sunday, June 13.