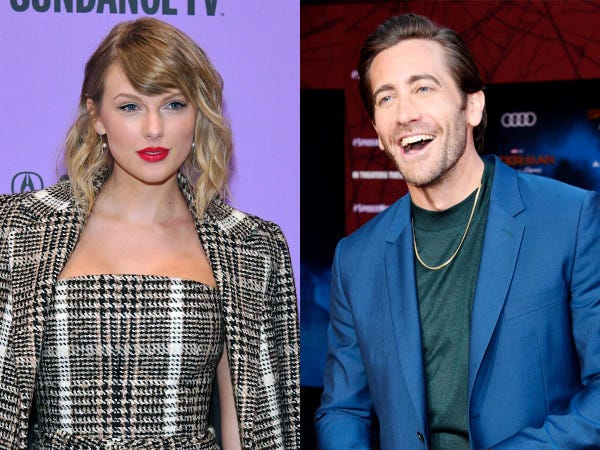 Jake Gyllenhaal's Instagram has been stormed by Taylor Swift fans.

On Monday, the 39-year-old actor shared an old photo of himself as a child wearing glasses.

Gyllenhaal is a spokesperson for New Eyes for the Needy, a non-profit that distributes prescription eyeglasses to people who can't afford them. He used his caption on Instagram to promote the organization's new speaker series, Project Human.

"I've worn my glasses ever since I parted my hair meticulously with gel (see above), which is why NEW EYES has always been near and dear to my heart," he wrote.

I’ve worn my glasses ever since I parted my hair meticulously with gel (see above), which is why NEW EYES has always been near and dear to my heart. Since 1932, @neweyes_ has provided eyeglasses to people who needed them most. I’m thrilled that they’ve partnered with @theinspireprojectus to create Project Human: Changing the Way We See the World, a speaker series coming to schools and remote learners this fall. Project Human is designed to spark conversations focusing on unity and equality. It’s an opportunity for students to interact with public figures and do what they do best: Keep ‘em on their toes! For a full line-up of speakers or to bring Project Human to a school near you, visit: http://theinspireproject.us/project-human/

But dedicated Swift fans couldn't help but see the photo as bait — or, at least, a visual representation of Swift's lyrics.

"Photo album on the counter / Your cheeks were turning red," Swift sings in the second verse of "All Too Well." "You used to be a little kid with glasses in a twin-sized bed."

"All Too Well" — the fifth track on Swift's 2012 album "Red" and one of the eight best songs of the decade, according to Insider — is widely assumed to be inspired by Gyllenhaal.

The two stars dated briefly in 2010. They were photographed looking bundled and cuddly throughout Thanksgiving weekend, strolling around the same area in Brooklyn where Gyllenhaal's sister, Maggie, lived at the time.

Maggie also confirmed the couple had spent the holiday at her home, calling the experience "great."

Less than two months later, however, Us Weekly reported that Gyllenhaal had broken up with Swift "out of the blue," shortly before New Year's Eve.

For her part, Swift has never explicitly confirmed that "All Too Well," a searing breakup anthem, was written about Gyllenhaal. But the song's autumnal lyrics, plus its references to visiting the home of an ex-boyfriend's sister, has long suggested a connection to their whirlwind relationship.

Additionally, Swift has always left clues for fans in her album booklets, hinting at the songs' inspirations.

In the "Red" booklet, seemingly random capital letters in the lyrics of "All Too Well" spell out the phrase "maple lattes" — which is almost certainly a reference to a coffee date she apparently had with Gyllenhaal in Brooklyn. In fact, a People magazine headline from November 2010 explicitly claims the couple shared maple lattes.

"There was only one way Jake Gyllenhaal posting a pic of himself as a little kid in glasses during All Too Well season was going to end," journalist Ashley Spencer joked on Twitter.