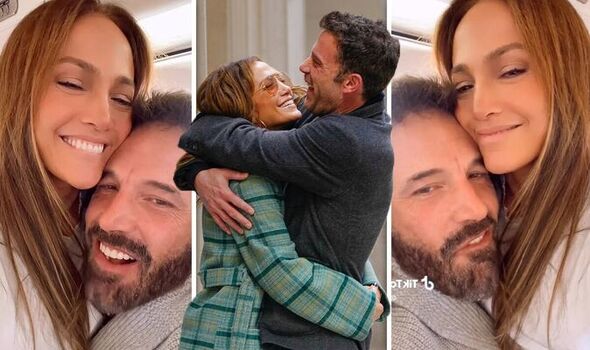 Jennifer Lopez looked more loved-up than ever when she posted a short video with her husband Ben Affleck, as the pair showed off their continued love for each other.

The Jenny From The Block hitmaker shared a rare relationship insight as she posted her first TikTok video alongside her Hollywood A-lister husband.

Jennifer posted a short video of herself cosying up to her husband while on a private plane, with the voiceover saying: “Guys I did it. I found the person that makes me the happiest I have ever been.”

The loved-up couple could be seen smiling at the camera, while Jennifer wrapped one arm around her hubby’s neck.

Jennifer wore a white t-shirt, while Ben could be seen chewing gum in a grey knitted sweater.

Jennifer Lopez shared a video with her husband Ben Affleck

Jennifer Lopez posted her first TikTok video alongside her husband Ben Affleck. As Jennifer rested her face on her husband’s head, the A-list couple put on an animated display.

Jennifer Lopez posted the loved-up video on TikTok, with the voiceover saying: “Guys I did it. I found the person that makes me the happiest I have ever been.” Jennifer continued to gush over her new husband Ben Affleck.

Ben Affleck and Jennifer Lopez married in July in Las Vegas, 20 years after their first engagement ended. After their initial breakup, the pair went on to marry and have children before coming back together last year.

Jennifer Lopez spoke in a recent interview about how “proud” she was to be taking her husband Ben Affleck’s last name. She said to American Vogue: “People are still going to call me Jennifer Lopez. But my legal name will be Mrs Affleck because we’re joined together. We’re husband and wife. I’m proud of that. I don’t think that’s a problem… It’s not traditional. It doesn’t have any romance to it. It feels like it’s a power move, you know what I mean?”

Jennifer Lopez and Ben Affleck first began dating in 2002 and got engaged in November of the same year. They were due to tie the knot in September 2003 but called off the wedding just days before the ceremony. Following their split, Affleck went on to marry actress Jennifer Garner, with whom he has three children: Violet, 16, Seraphina, 13, and Samuel, 10.

Jennifer Lopez went on to marry Marc Anthony with whom she shares her twins Max and Emme. However, the relationship only lasted ten years with the pair divorcing in 2014. JLo went on to date her former backup dancer Casper Smart till 2016. She then dated baseball player Alex Rodriguez, with the pair even getting engaged. However, they announced the end of their relationship in April 2021.