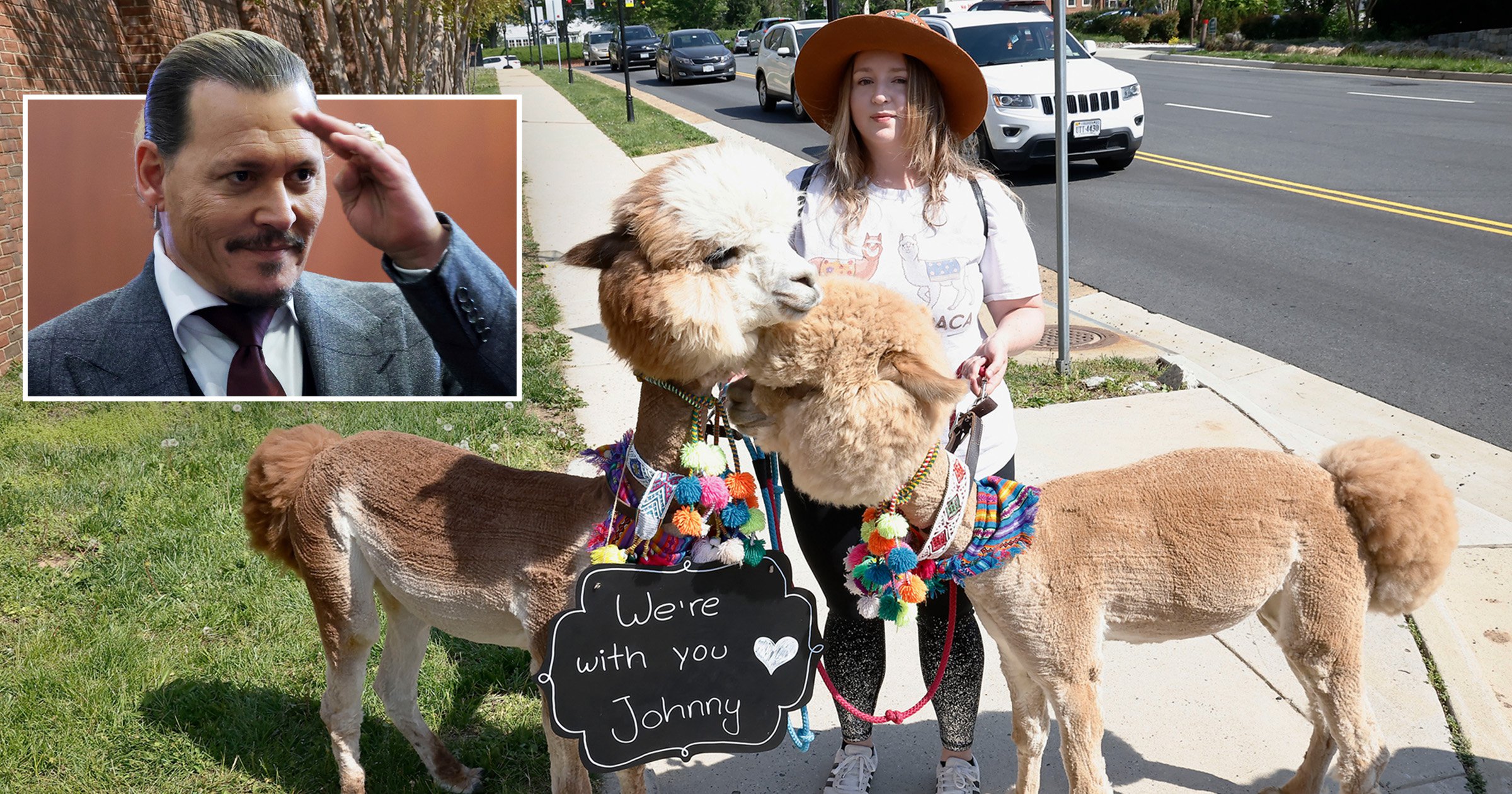 Johnny Depp’s libel trial is still in progress and one super fan wanted to show their support in an unconventional, yet adorable, way.

The actor is currently suing ex Amber Heard over a 2018 article she wrote in The Washington Post, which Depp’s lawyers say falsely implies he physically and sexually abused her.

The article does not mention him by name and Heard is countersuing for $100million (£76m), claiming Depp libelled her by calling her a liar.

Depp has already taken the stand in court, with Heard believed to be in the hot seat next week.

In a bid to show their support, it is believed Depp fans have been travelling far and wide to Fairfax, Virginia where the trial is taking place.

However, one fan in particular went the extra mile by bringing two ’emotional support alpacas’ to the courthouse.

Named Andrea Diaz by The Washington Post, the woman showed up with two alpacas wearing chalkboards around their necks, sending encouraging messages to Pirates of the Caribbean star.

One of the signs around their necks read, ‘We’re with you Johnny’ and had a heart drawn on it.

The adorable creatures are named Dolce and Inti, with owner Diaz saying she thought they might ‘brighten his day.’

Diaz – who owns pet company My Pet Alpaca – is thought to have taken her fury friends to the courthouse after alpacas were mentioned during the trial.

Heard’s lawyer, J. Benjamin Rottenborn, recently asked Depp about whether he might return to the Pirates of the Caribbean franchise and reprise his role as Captain Jack Sparrow.

‘The fact is, Mr. Depp, if Disney came to you with $300million and a million alpacas, nothing on this earth would get you to go back and work with Disney on a Pirates of the Caribbean film? Correct?’, he asked,

Later that day, a video posted by the Law&Crime Network YouTube channel showed the star leaving the court and heading to his car saying: ‘It’s alpaca day’ after seeing Diaz standing with the animals.

The alpaca owner was interviewed in the video and said Depp looked ‘kind of surprised’ when he saw her standing with the creatures.

‘He smiled and waved and we all got very excited,’ she shared after being fully committed to the cause and even standing in the rain waiting for the actor to emerge.

‘He’s going through a lot right now so I just thought it might cheer him up,’ she also told the interviewer.

The Depp and Heard trial began with jury selection on April 11 and is expected to last around seven weeks, after Depp alleged that Heard lied about being a victim of domestic abuse in her op-ed.

Depp also alleged that Heard had in fact abused him during the course of their relationship and their 15-month marriage.