After Sunny Hostin and Ana Navarro tested positive for COVID-19, Vice President Kamala Harris went through with her interview safely from a separate room on ‘The View,’ where she called on Americans to get vaccinated!

Vice President Kamala Harris’ return to the view had an unexpected twist when co-hosts Sunny Hostin and Ana Navarro tested positive for COVID-19 in the middle of the Friday September 24 broadcast. While the 56-year-old vice president was originally planned to do her interview live in the studio, Harris took questions from Joy Behar and Sara Haines remotely on a video call backstage, and she urged people to get vaccinated against the coronavirus.

Behar kicked off the interview by assuring that Harris felt safe in light of the covid scare. The vice president praised the two hosts for being so cautious about the virus to begin with, and mentioned if they were unvaccinated the consequences could’ve been much worse. “Sunny and Ana are strong women. I know they’re fine, but it really also does speak to the fact that they’re vaccinated, and vaccines really make all the difference, because otherwise we would be concerned about hospitalization and worse,” she said.

After the well-wishes for the two hosts, Behar asked about the possibility of increasing restrictions for those who don’t get the covid vaccine. “People got to be responsible. I’ve been watching—like many of you—with heartache, the videos of people who are in an ICU bed, who didn’t get vaccinated, pleading with their family members [to] please get vaccinated,” she said. “When I think of it in the context of anyone of us who have had the awful experience of holding the hand of a loved one who is in an ICU bed or is near death.”

Harris implored Americans to think of those closest to them when thinking about the vaccine. “Don’t put your families through that. The vaccine is free. It is safe, and it will save your life. So, folks just need to get vaccinated,” she said to a round of applause.

Other topics that the vice president touched on during her Friday appearance included border patrol’s handling of Haitian refugees, the U.S. pulling troops out of Afghanistan, the Texas abortion laws, and increasing broadband access for students. Harris’ previous appearances on the show, began in 2019, when she was a California senator and candidate for president herself. She appeared once as President Joe Biden‘s running mate in October 2020, and she had an appearance on the show in June 2020, months before she was announced as Biden’s vice presidential pick! 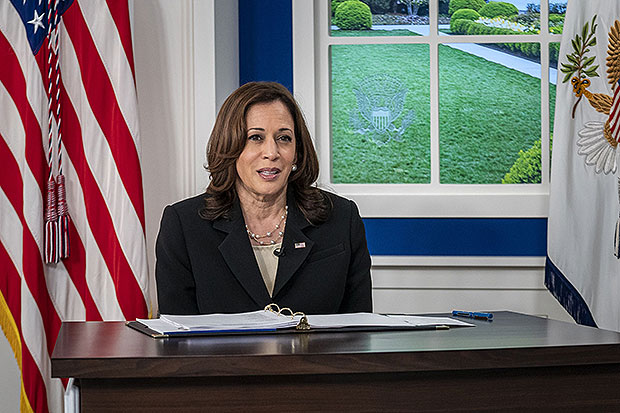 During her June 2020 appearance, Harris spoke in depth about George Floyd’s murder in May 2020. Following so shortly after Floyd’s death and in the midst of Black Lives Matter protests across the country, Harris noted at the time that convicting Floyd’s killer Derek Chauvin wouldn’t be “easy.” Chauvin has since been convicted. At the time, the then-senator called for Chauvin to be held responsible for his actions. “But there’s no denying that this, this officer and those who were his accomplices should pay attention real consequences and accountability for what they’ve done,” she said.