Keith Urban is cheering on his “baby girl” Nicole Kidman. The country superstar praised his wife after she received nominations for a Golden Globe and Screen Actor Guild Award this week for her role as Grace Fraser in The Undoing.

The “We Were” singer posted a photo of Kidman on his Instagram Story on Thursday, along with a sweet message.

“Congrats babygirl on the tip of the hats from the @goldenglobes and @sagawards for your ‘skills on fire’ performance in @undoinghbo,” he wrote. 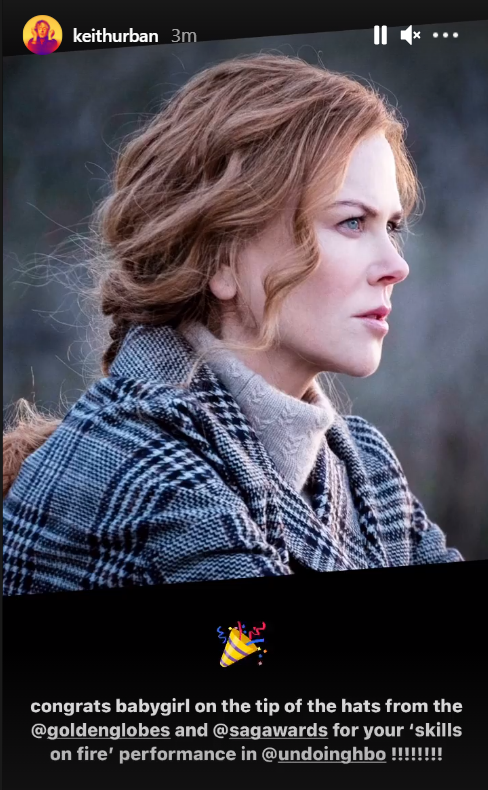 After her Golden Globe nomination on Wednesday, Kidman released a statement expressing her happiness over the honor.

“Thank you to my wonderful friends at the HFPA!!! To wake up in Sydney to 4 nominations for our show is an incredible way to start the day. This has been the journey of a lifetime — from David E. Kelley’s imagination to Susanne Bier’s visionary direction of every episode to Hugh Grant (!!!), Donald Sutherland (!!!), Edgar Ramirez, Lily Rabe, Noah Jupe, and Noma Dumezweni to audiences who embraced The Undoing all over the world and now to this… these Golden Globe nominations mean more than you could ever imagine,” she said in part.

On Thursday, she also posted an Instagram Story thanking the SAG-AFTRA for the recognition.

“Wow, what a morning!!!! Thank you to all of my @sagaftra friends and peers!! And to Hugh, my screen husband and partner in crime (and fellow nominee!) This is a beautiful honor and I am so, so grateful for the recognition from my fellow actors.” 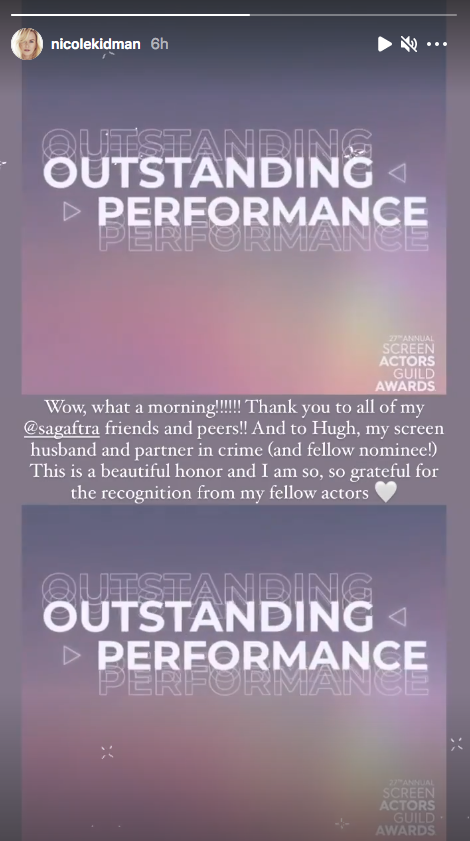 Up next for Kidman, she’s stepping into Lucille Ball’s shoes in Aaron Sorkin’s upcoming film. While the actress’ casting as the comedy icon caused controversy earlier this month, she couldn’t be more excited to take on the role.

“I was like, ‘Yeah, I would love to give it a go,'” Kidman said in an interview with Variety published last month. “With Aaron’s words and his direction and Javier [Bardem playing Desi Arnaz]… that’s kind of a wonderful prospect to, you know. But yikes, off we go. Give it a go. Try my best — see if I can do it.”

See more in the video below.