Lauren Conrad Reveals She Suffered An Ectopic Pregnancy 6 Years Ago

Lauren Conrad has gotten real in a post about her experience with ectopic pregnancy.

In light of the unprecedented overturning of Roe v. Wade, the actress could no longer stay silent, taking to Instagram Tuesday to explain:

“The last few days have been hard. I’ve been searching for the right words, and reposting someone else’s didn’t feel quite right. I wanted to share my own experience with lifesaving reproductive care. Six years ago, while trying to start our family, I had an ectopic pregnancy.”

It’s more common than one would think. For those who aren’t aware, ectopic pregnancy happens when a fertilized egg grows outside of the uterus — typically in the fallopian tubes. Ectopic pregnancies cannot sustain the growing fetus and can cause serious health issues — even death in the affected women.

That’s why laws protecting abortion rights like Roe v. Wade are so important!

Lauren thanked her “prompt medical doctors” for preserving her fallopian tubes so she and husband William Tell could later go on to have “two healthy pregnancies.”

Related: Laura Prepon Opens Up About Abortion During Complicated Pregnancy

The Hills actress’ comments came just four days after the unprecedented overturning of Roe v. Wade struck down a woman’s constitutional right to have an abortion. The law was initially passed in 1973 and has protected women like Lauren in the years since, among many others. In the aftermath of the overturning, power has been turned over to individual state legislature to decide whether or not abortions shall remain legal.

The Laguna Beach star explained the reason for her inspiration to come forward with her story came after she read about another woman being in a similar situation with ectopic pregnancy post Roe v. Wade. She explained:

“Yesterday I read about a woman with this same condition having her ectopic pregnancy rupture – and facing death – while waiting for treatment because her doctor was on the phone with his lawyer out of fear of losing his medical license.”

This is the danger of abortions no longer being constitutionally protected! Lauren added that while “talking about abortion is hard” because it “divides us,” it’s important nonetheless to listen “to each other in a respectful way, especially when we disagree.” We totally agree! She continued:

“I hope someday we will be in a place where every woman has access to the healthcare she needs and the freedom to decide what happens in her own body.”

Well, we’re somehow a lot further from that than we were in 1973… Lauren wrapped up her post by acknowledging the women in her life:

“Many women in my life have had their own experiences with abortion. I am so grateful that in each case they were able to safely receive the healthcare they needed and were free to make their own decisions.”

As for now, Lauren explained to Us Weekly that she and her husband are “at capacity” with their two children and are not currently planning to have more:

What are YOUR thoughts on Lauren’s experience, Perezcious readers? 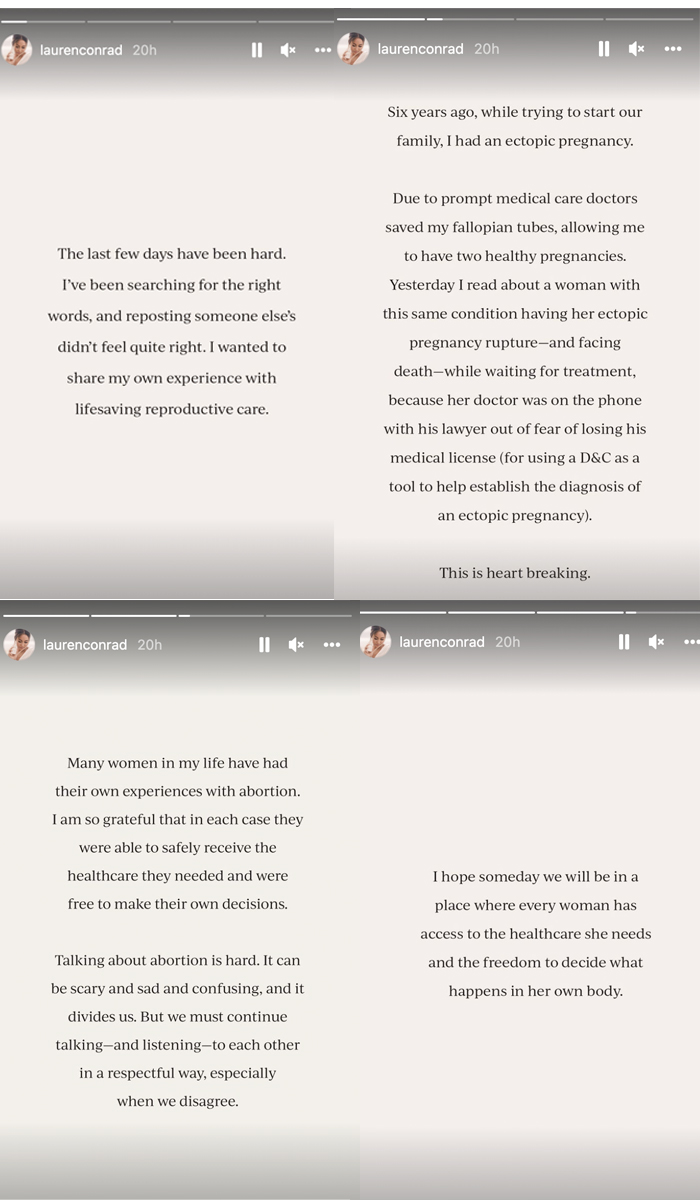