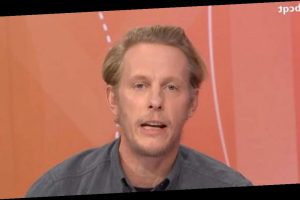 Actor Laurence Fox has hit back at singer Lily Allen after she slammed his recent appearance on Question Time, during which he got into a fiery debate over press coverage of Meghan Markle , the Duchess of Sussex, is racist.

Laurence, 41, shared a set of screenshots from Lily's social media in which she slams his attitude.

Lily penned: "Sick to death of luvvies like a Lawrence Fox going on TV and forcing their opinions in everybody else, when he'll never have to deal with what normal people have to deal with in his gated community.

"BBC should be ashamed, this is not what we pay our TV licences for."

The star added: "Stick to acting mate. Instead of ranting about things you know nothing about."

Laurence, who used to be married to Billie Piper, captioned the screenshots with a reference to an episode of satirical cartoon South Park, titled Stunning and Brave, which ridicules political correctness.

He penned: "Lily Allen is the most stunningist and bravery artist in the whole wide world #stunningandbrave."

Laurence drew a deal of attention to himself during an episode of Question Time last week, which saw him clash with academic Rachel C Boyle over press coverage of Meghan Markle.

Meghan and husband, Prince Harry , recently announced that they were to step back as senior royals.

They have been vocal about struggling with coverage by the UK press, with a debate blazing over whether the coverage has been racist or not.

Rachel accused Laurence on the show of "white privilege", which saw Laurence accuse her of racism.

"Let's be really clear about what this is," Rachel said to the panel, "Let's call it by its name – it's racism.

"She's a black woman and she's been torn to pieces."

Laurence passionately disagreed, scolding: "It's not racism. We're the most tolerant, lovely country in Europe.

"It's so easy to just throw your charge of racism at everybody and it's starting to get boring now."

Rachel has since reached out to fans, writing: "Thank you for the amazing that I have received after BBC Question Time. This work isn't easy.

"Being a black academic researching race and ethnicity isn't easy. Heaving conversations with ill informed privileged people isn't easy. But THIS is what I came to do."

Laurence added fuel to the fire by commenting: "Hang in there! We are all behind you! #stunningandbrave."