Lil Nas X has created yet another wild music video. This time, he danced naked in a prison shower with other nude men before escaping with the help of Jack Harlow. Nbd.

Lil Nas X definitely understood the assignment for the music video to his new song, “Industry Baby.” The video, which dropped on Friday, July 23, shows the 22-year-old rapper breaking out of prison with the help of Jack Harlow, 23, who is featured on the song. But before his harrowing escape, Lil Nas X drops his pink prison jumpsuit and goes fully nude for a big dance routine alongside other nude inmates. Yep, just as wild as expected!

The video begins with a judge sentencing Lil Nas X to five years in Montero State Prison, which is reference to his upcoming album Montero. Three months later, the rapper is working out (and singing!) in his prison cell before leading a nude dance session in the showers with his fellow prisoners. All their private parts were blurred out for the racy scene, of course. The inmates all also get in some dance moves while dressed in their purple prison attire. 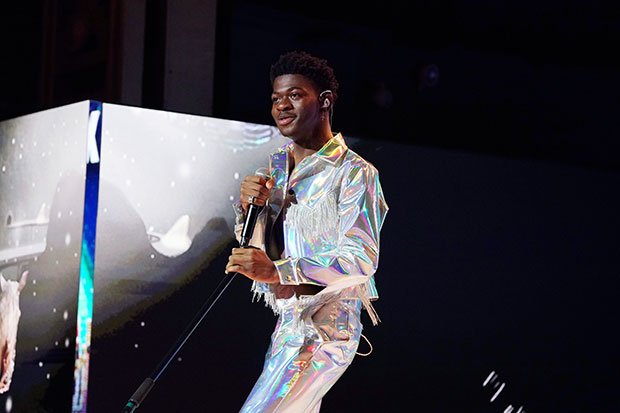 Later on, Jack slips Lil Nas X a pickaxe in his prison cell to escape. As Lil Nas X does so, the camera cuts to a security guard — played by Teen Wolf alum Colton Haynes  — watching the similarly wild music video for his previous single “Montero (Call Me By Your Name)”. The “Industry Baby” music video was directed by Christian Bresulauer, and the song was produced by Take a Daytrip and Kanye West. It is the latest single for Lil Nas X’s upcoming Montero album.

Lil Nas X is no stranger to releasing some crazy music videos. In March, he dropped the video to “Montero (Call Me By Your Name)”, which featured the Grammy winner giving Satan a lap dance, among other things. The overall meaning of the video was to show Lil Nas X embracing his sexuality as a queer person, according to Columbia Records’ press statement at the time. However, Lil Nas X still received backlash for the risqué music video.

Although Lil Nas X is primarily known for “Old Town Road,” the history-making, 14x Platinum, mega-success of a song, he’s continuously tried to dispel that he’s a “One Hit Wonder.” “Panini,” the second cut from his 7 EP, hit No. 5 on the U.S. Billboard Hot 100 and eventually went platinum five times. Meanwhile, “Rodeo,” the song he did with Cardi B is also multi-platinum. That success surely speaks for itself.