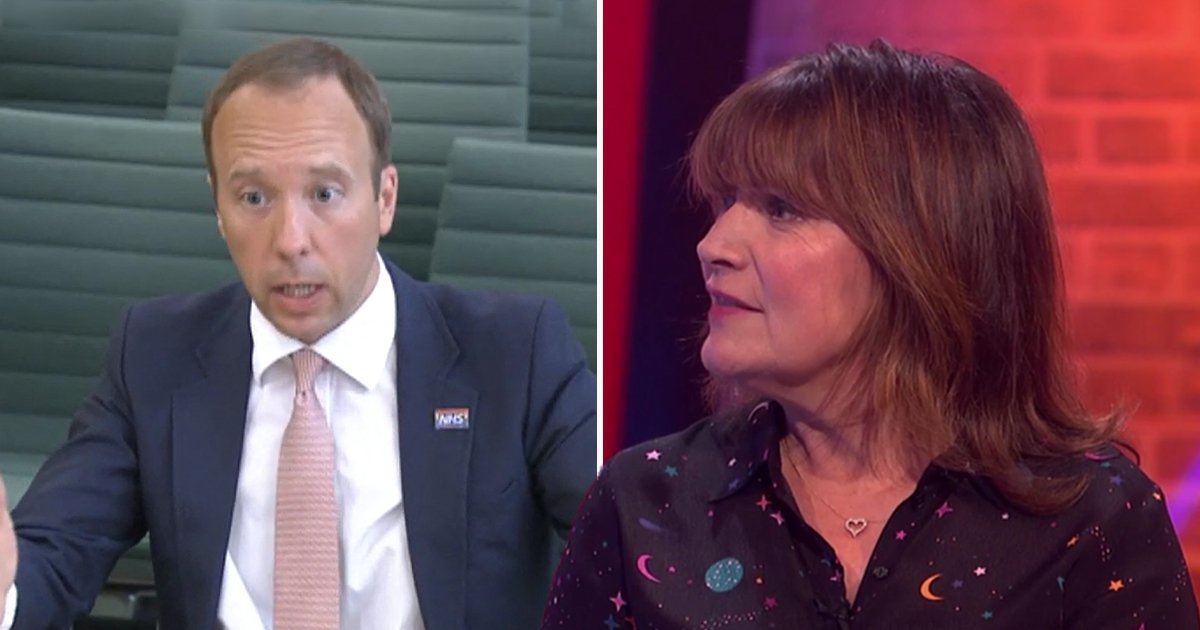 Lorraine Kelly has ripped into Matt Hancock after he was seen passionately kissing his aide, Gina Coladangelo, despite being married.

The morning TV host didn’t hold back as she lashed out at the Health Secretary, saying: ‘I’m in shock that he could get anyone near him.’

Lorraine also confessed on The Last Leg that her ‘toes refuse to uncurl’ after seeing the photos of him and Ms Coladangelo and what a mood.

When host Adam Hills went on to express his shock that Lorraine had said an explicit word to him off camera, she insisted: ‘I’ll say it about Matt Hancock again and again and again.’

Elsewhere on the show, presenters Josh Widdicombe and Alex Brooker didn’t hold back either, with Josh likening the kiss to ‘the bit in Love Island where they have to pass the ice cube [in their mouths].’

‘This isn’t the worst thing he’s done in his job this year,’ Alex added.

While Mr Hancock was also slammed for breaking social distancing guidelines, Adam pointed out that the photos would have been much stranger if he had abided by them.

Elsewhere, Josh joked that Mr Hancock had leaked the photos himself ‘to prove he’s kissed a girl,’ while Adam declared that he had gone from ‘f**king hopeless to hopelessly f**king.’

In CCTV footage obtained by The Sun, Mr Hancock, who has been married to his wife Martha for 15 years, was seen kissing Ms Coladangelo in his office.

He has since apologised for breaking social distancing rules.

His statement said: ‘I accept that I breached the social distancing guidance in these circumstances.

‘I have let people down and am very sorry. I remain focused on working to get the country out of this pandemic, and would be grateful for privacy for my family on this personal matter.’

The Last Leg airs Fridays at 10pm on Channel 4.