Lucy Hale Sings Sara Bareilles’ ‘She Used to Be Mine’ as Katy Keene – Listen Now! 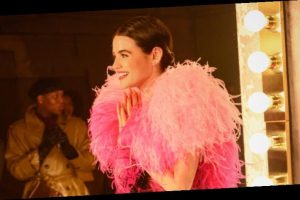 Lucy Hale sang on the season finale of her The CW series Katy Keene and you can listen to her performance right here!

The 30-year-old actress performed the song “She Used to Be Mine,” which was written by Sara Bareilles for the Broadway musical Waitress.

Lucy explained on The Talk this week that the song is actually one of her favorite songs of all time.

“I get to sing ‘She Used To Be Mine’ from the Broadway musical Waitress, sung by Sara Bareilles. It was like one of my top three favorite songs before they told me I was going to sing this song. So, it’s kind of a full circle moment. It’s a big song to tackle, so I’m glad they trusted me with it,” Lucy said. “We have a lot of Broadway’s legends on the show and a lot of Broadway influences.”

Listen to Katharine McPhee‘s studio version of the song from when she was in Waitress!