After getting started in various telenovelas and starring in one of Colombia’s highest rated shows, El Cartel, Manolo Cardona has been shifting towards more prestige TV, particularly on Netflix, with roles in Narcos and Who Killed Sara. The latter is a murder mystery about a wrongfully accused man seeking revenge. Ahead of Who Killed Sara’s debut on the streaming platform, the 43-year-old actor spoke to ET about what drove him to the project, Agatha Christie’s influence, and baring it all for the series.

Created and written by José Ignacio Valenzuela, the series opens with a quote from Christie’s 1972 classic The Man in the Mist: “Very few of us are what we seem…” And it’s that line that sets up the entire mystery as Alex (Cardona) seeks vengeance on childhood friends after spending 18 years in prison for a crime — being convicted for the death of his sister — he did not commit.

“He’s a very complex character,” Cardona says of Alex. And after spending all this time in prison, “he’s full of rage,” with his initial target set on Rodolfo Lazcano, whom he believes is responsible for Sara’s murder.

But things quickly get complicated when Alex learns that Rodolfo is innocent and that someone he overlooked was responsible for his fall from grace. “All the secrets that all the characters have come to light,” the actor teases.  And soon, “everybody is going to understand that nobody knows anybody; that nothing is how it appears to be.” 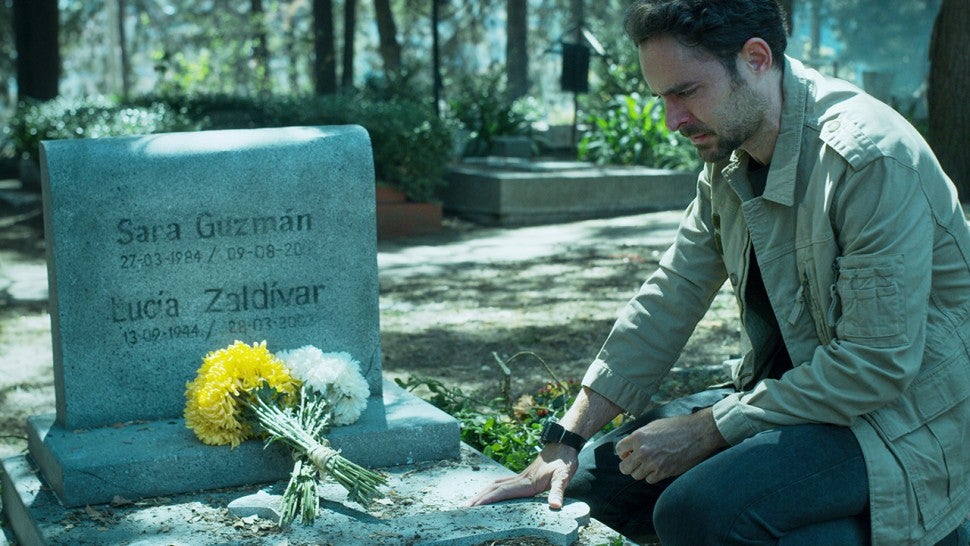 While a fun character to play, Cardona says the toughest part was staying in such intense physical shape during the entire six-month shoot. Not only is Alex a personal trainer, but when audiences first meet him in prison, he gets completely naked before taking a shower.

“I really had to be in shape and I love to eat,” he says. “I don’t take care of myself that much in my real life, so it was good to be in shape for the character — but it was hard.”

Overall, “there were a lot of ingredients” that made Cardona say yes to starring in the series, from the script by Valenzuela (“He’s a very good writer.”) to the producers behind it, including Juan Uruchurtu. But it was also a chance to dive into a genre that’s not often made for TV in Latin America.

While a fan of the genre that Christie has made so popular around the world with books like, Murder on the Orient Express or Death on the Nile, Cardona notes that it is rare for ones to be written and created in Latin America. “Because we’re used to seeing these coming from the U.S. and the U.K.,” he says, adding that Who Killed Sara is part of a new trend of genre storytelling that comes out of the area and is “shared with the world.”

Cardona thinks it’s also inspiring to see more Spanish-language series gain popularity on Netflix, especially during the golden age of content. “It’s an opportunity that we haven’t seen in a lifetime. It’s just happening now,” the actor says, excited for fans all over the world to dig into Who Killed Sara.

Who Killed Sara is now streaming on Netflix.