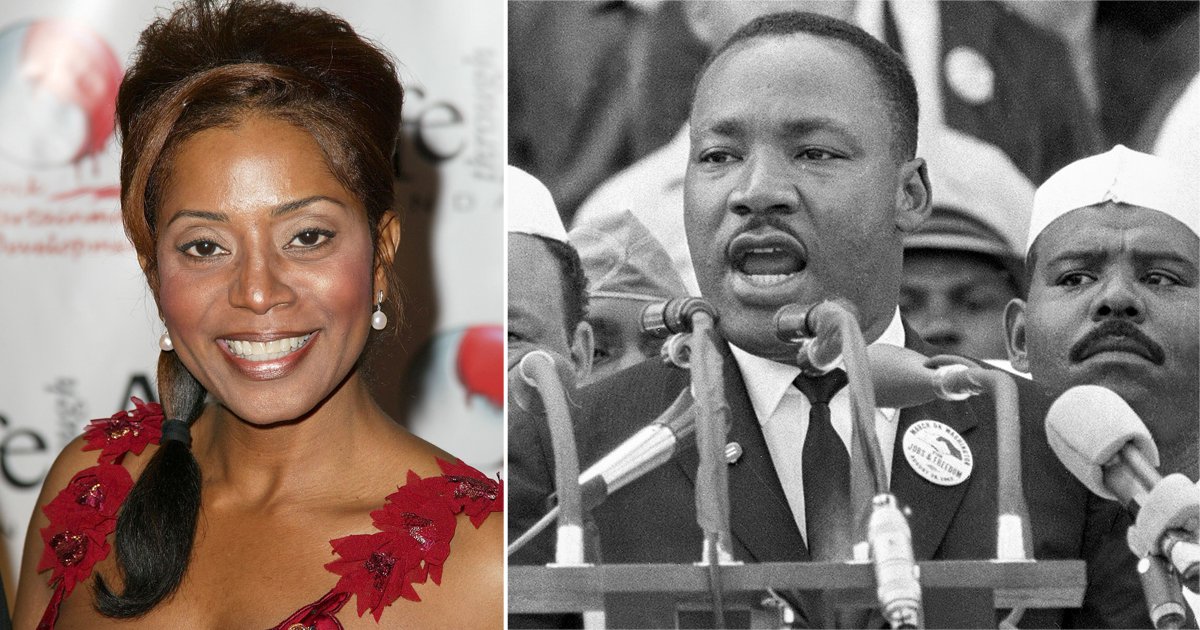 Martin Luther King Jr’s beloved goddaughter has recalled how the Ku Klux Klan bombed her family home, leaving her ‘scarred’ to this day.

Donzaleigh Abernathy, an activist and actress known for starring in The Walking Dead, has teamed up with a choir to record The Listening inspired by Dr King’s speech, Beyond Vietnam: A Time To Break Silence’, which he delivered exactly one year prior to his assassination in April 1968.

Growing up in segregated Alabama, Donzaleigh saw the Civil Rights Movement first-hand and her childhood was riddled in fear.

Particularly due to being in such close proximity to Dr King and his best friend – her father – Ralph Abernathy despite their non-violent approach to protesting for racial equality.

‘I remember the fear of being afraid,’ Donzaleigh explained to Metro.co.uk.

‘The fear they would kill my father because they had bombed our home when my mother was pregnant with me. I came into the world trembling and I trembled for the first six months of my life.

‘I can still tremble out of nowhere today. I’ll be filming a scene and out of nowhere my lips will start quivering. The director will say, “stop that”, but I can’t. It’s just something that I have. It’s the manifestation of the residual of that fear in me. You don’t get over it.’

Donzaleigh continued: ‘We moved from Montgomery, Alabama to Atlanta in 1962 and we thought everything was going to be OK, the Ku Klux Klan still called our home every evening and we’d eat our dinner in fear.

‘It left a scar and it’s still there. However, when they stormed the Capitol [in January], I remembered that I’m not afraid of white supremacists and I’m not.

‘I’ve had to deal with them every single day of my life.’

During our hour-long Zoom call, Donzaleigh recalls her childhood experiences in Alabama so vividly that it’s easy to imagine the scenes in full colour without ever having existed in that time.

When she breaks down in tears while recalling how Dr King ‘died in [her] father’s arms’, it’s hard not to empathise with her raw pain all these decades later.

‘The light went out in our lives when Uncle Martin died. My father never recovered,’ she revealed.

Dr King and Ralph met in pretty hilarious circumstances – her father was stood-up by a ‘pretty young lady’ only to see the woman on a date with Dr King.

At this point, Dr King and Ralph were complete strangers but had instant chemistry and became the best of friends.

Their friendship lasted a lifetime.

‘Oh my God, they loved each other,’ Donzaleigh remembered fondly.

However, she admitted: ‘When I was a little girl, I used to think my dad loved Uncle Martin more than he loved us because he was always on the road with Uncle Martin…

‘I loved my dad, I thought he was the most amazing creature that God had ever created. It felt like I never had my dad but Uncle Martin had him five days a week.

‘But then I’d look at how much Uncle Martin gave to us, he gave us such an incredible life. Together they changed the world.’

Donzaleigh remembers ‘Uncle Martin’ as having a ‘funny and witty’ personality.

She loved the man who was like a regular family member behind closed doors but also a pillar of strength to the wider Black community in America.

‘Uncle Martin was love,’ the actress said. ‘Even though the years have passed, it’s still present; the loss, the pain, the suffering. He was great.

We spoke the day after Joe Biden was inaugurated as the new President, putting an end to a divisive chapter led by Donald Trump.

Donzaleigh, who ‘got down on her knees and prayed’, is now hopeful for a future of ‘moving forward together’.

‘You meet hate with hate, but if you meet their hate with love, there’s a chance for something to evolve,’ she said.

The Listening reminds this generation of Dr King’s legacy but was also a proud moment for Donzaleigh personally.

She said of the choir recording: ‘It’s just tremendous. When I heard it for the first time with my husband, I just sat at the edge of my seat because it was just classical.

‘It was just incredible and I was so inspired. It speaks to the unity that literally is taking place across the world in the Black Lives Matter. Just powerful and so necessary.’

The Listening, composed by Cheryl B. Engelhardt and featuring Donzaleigh Abernathy and Wes Felton is out now.