Home » Celebrities » Megan Rapinoe Digs In After Trump Criticism: ‘I Stand by the Remarks’

Megan Rapinoe Digs In After Trump Criticism: ‘I Stand by the Remarks’

Megan Rapinoe on Thursday tried to quiet a brewing feud with President Trump sparked by her pledge to skip any visit by the United States women’s soccer team to the White House after the World Cup. Ms. Rapinoe said she stood by her remarks, apologizing only for using a obscenity to express them, and urged her teammates to join her in any potential boycott.

“I stand by the comments that I made about not wanting to go to the White House, with exception of the expletive,” she said. “My mom would be very upset about that.

“But I think obviously answering with a lot of passion, considering how much time and effort and pride we take in the platform that we have, and using it for good, and for leaving the game in a better place and hopefully the world in a better place — I don’t think that I would want to go and I would encourage my teammates to think hard about lending that platform or having that co-opted by an administration that doesn’t feel the same way and fight for the same things we fight for.”

Ms. Rapinoe said she was “not interested” in answering any more questions on the simmering controversy, and referred reporters to her many earlier comments about Mr. Trump and his administration’s policies. She was soon smiling and joking as the conversation shifted to soccer.

Her comments came in a scheduled news conference on the eve of the United States team’s highly anticipated quarterfinal against host France in Paris, and one day after President Trump criticized her in a series of Twitter posts for her declaration that she and the team would not go to the White House if they won the World Cup.

The feud between Ms. Rapinoe, a midfielder and captain of the United States team, and Mr. Trump has threatened to overshadow the Americans’ pursuit of their second straight World Cup title, even as it has highlighted the way the American team has embraced its popularity, and its political activism, to press for progress on a number of issues, including pay equality for women’s athletes and L.G.B.T. rights.

[President Trump criticizes Megan Rapinoe over her refusal to visit the White House.]

Mr. Trump apparently had been angered by a brief video clip in which Ms. Rapinoe had declared that she and the team would not go to the White House if they won the World Cup. Her comments were filmed by a soccer magazine at a pre-World Cup cover shoot in January and published online in an article two weeks ago, but they became a viral sensation this week when the magazine, 8by8, posted a video clip of her comment on social media.

Mr. Trump also had been asked earlier in the week about Ms. Rapinoe’s decision to “protest” when the national anthem is played before matches. Ms. Rapinoe made headlines in 2016 by kneeling during the anthem in a show of support for the social justice protests of the former N.F.L. player Colin Kaepernick. Soon after she began kneeling, U.S. Soccer imposed a rule requiring national team players to stand in early 2017, and ever since Ms. Rapinoe has stood silently during the anthem. But it was her chortling response to the idea of a White House visit that prompted Mr. Trump to scold her on Twitter.

“Megan should WIN first before she TALKS!” Mr. Trump wrote. He noted that he had not yet invited the American team for a visit, but then extended the invitation to the group “win or lose.”

“Megan should never disrespect our Country, the White House, or our Flag, especially since so much has been done for her & the team,” Mr. Trump added. “Be proud of the Flag that you wear.”

While the team was welcomed to the White House by President Obama after its 2015 world titles, Ms. Rapinoe is not the only United States player to say she will not visit the White House while Mr. Trump is in office. Forward Alex Morgan told Time magazine last month that she would not go if invited, and hours after Mr. Trump’s tweets on Wednesday another veteran member of the United States team, defender Ali Krieger, said she would stand with her teammate and “sit this one out.”

Putting the word “president” in quotation marks and tagging Ms. Rapinoe with her Twitter handle, Ms. Krieger wrote to Mr. Trump, “I know women who you cannot control or grope anger you, but I stand by @mPinoe.”

“We all support Megan; she knows that,” Ellis said. “We know we have each other’s back in there.”

Ms. Ellis rejected the suggestion that the exchange with Mr. Trump would be a distraction against France, one of the tournament’s top teams and the toughest opponent the United States has faced. “I think for our players, there’s only one purpose, one mission that we’re here,” Ms. Ellis said. “Comments, media, whatever — it’s always been something that we could block out pretty easily.”

The United States women’s team, long a leading force in women’s soccer, has embraced its political power in recent years. The team sued the United States Soccer Federation for gender discrimination earlier this year, the latest salvo in a multiyear fight for pay equity, and its politics, in public and private, are hardly a secret to regular followers of the team and its members.

But in catching Mr. Trump’s attention this week, Ms. Rapinoe and her teammates have been pulled into a broader debate about politics, protest and the role of athletes in that fight. It is one they have increasingly welcomed.

“I think to be on this team is to understand these issues,” Ms. Rapinoe said in an interview with The New York Times in March. The comment was about the gender discrimination lawsuit specifically, but it also spoke to the players’ political awareness generally.

“We don’t have to be put in this little box,” Ms. Morgan told Time magazine in May. “There’s the narrative that’s been said hundreds of times about any sort of athlete who’s spoken out politically. ‘Stick to sports.’ We’re much more than that, O.K.?”

Ms. Rapinoe, who turns 34 next week, has gone further than many of her teammates. In May, she told Yahoo Sports that “I’ll probably never sing the national anthem again,” and labeled herself “a walking protest” of Mr. Trump, a president whom she labeled “sexist,” “misogynistic,” “small-minded,” “racist” and “not a good person.”

She has implied that most of her teammates, who include several gay women like herself — two will marry later this year — shared her politics.

“I don’t know everyone’s voting patterns on our team,” she told 8by8 in the interview that produced the White House quote. “But I would hope no one voted for him.” 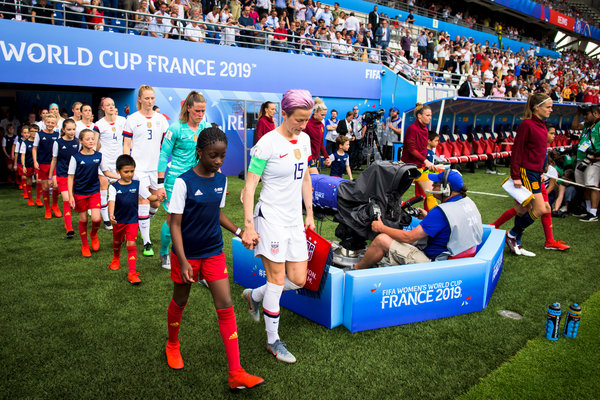 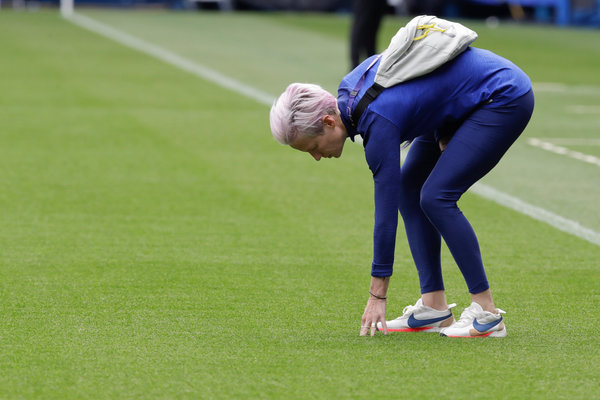 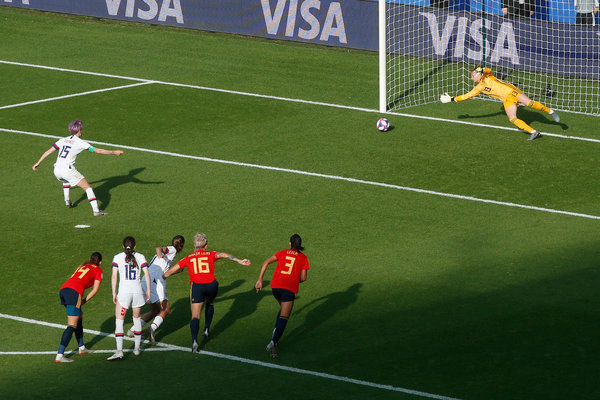