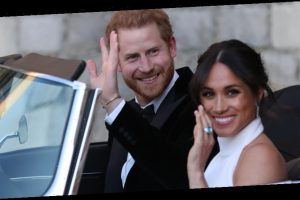 Meghan Markle did something so sweet for Prince Harry!

According to a new report from People on Friday (May 22), Meghan surprised Harry with a thoughtful gift on his birthday back in September.

PHOTOS: Check out the latest pics of Meghan Markle

“Last year, for Harry‘s birthday, Meghan recreated their Botswana camping adventures in their backyard. It’s a place that means so much to them — and to Harry in particular — so Meghan wanted to bring that happy place to him on his day so she set up a tent, got sleeping bags, cooked dinner and recreated Botswana where they fell in love,” a source told the publication.

If you didn’t know, the couple went to Africa together after two dates in London after meeting in summer of 2016.

“And then it was I think about three, maybe four weeks later that I managed to persuade her to come and join me in Botswana. And we camped out with each other under the stars. She came and joined me for five days out there, which was absolutely fantastic,” Harry previously said of their love story.