Come for Meghan Markle all you want, but leave her real-life friends out of it!

That’s the message the former Royal was trying to convey in her latest legal move against the British newspaper, Mail on Sunday, and its publisher, Associated Newspapers, on Thursday. In newly released excerpts of their ongoing court case, Meg’s legal team is doing everything they can to block the outlet from revealing the names of five women who spoke to People for a cover story about her last year.

As our readers will recall, this is the same feature that made mention of the confidential letter Prince Harry‘s wife sent to her father Thomas Markle in 2018, causing a firestorm of issues for her in the media.

When five of Meghan’s close friends spoke to People about the “global bullying” aimed at her, the controversial note was referenced and the Mail on Sunday said Thomas revealed the contents of the letter only after a friend had already mentioned its existence. But even still, Markle doesn’t want them paying for the reveal of its existence!

In the witness statement of her application filed at the High Court in London, the Duchess of Sussex argued that “Associated Newspapers, the owner of The Daily Mail and the Mail on Sunday, is threatening to publish the names of five women—five private citizens—who made a choice on their own to speak anonymously with a U.S. media outlet more than a year ago, to defend me from the bullying behavior of Britain’s tabloid media.”

“These five women are not on trial, and nor am I. The publisher of the Mail on Sunday is the one on trial. It is this publisher that acted unlawfully and is attempting to evade accountability; to create a circus and distract from the point of this case—that the Mail on Sunday unlawfully published my private letter. Each of these women is a private citizen, young mother, and each has a basic right to privacy. Both the Mail on Sunday and the court system have their names on a confidential schedule, but for the Mail on Sunday to expose them in the public domain for no reason other than clickbait and commercial gain is vicious and poses a threat to their emotional and mental wellbeing.”

To put it simply, Markle added:

“The Mail on Sunday is playing a media game with real lives.”

The former Suits star asked the courts to keep the UK tabloids from breaking precedent and “abusing the legal process by identifying these anonymous individuals.” She noted they’d be doing a disservice to themselves and putting their own various unnamed sources at risk, too. 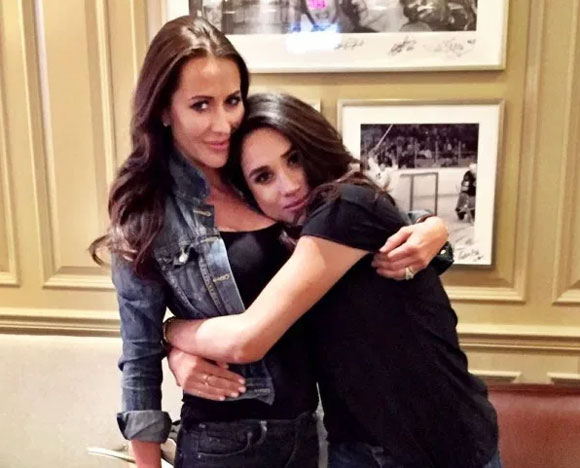 The thing is, a Mail on Sunday spokesperson told ITV News later that same day they “had absolutely no intention of publishing the identities of the five friends” at trial this weekend. However, they do believe it’s an integral part of the ongoing litigation:

“But their evidence is at the heart of the case and we see no reason why their identities should be kept secret. That is why we told the Duchess’s lawyers last week that the question of their confidentiality should be properly considered by the Court.”

But Meg’s legal team fired back and called bulls**t on their stance:

“We vehemently believe that the Mail’s threat to publish has nothing to do with the case, and is only being done so the Mail can target five innocent women through the pages of its newspapers and its website.”

A source close to the situation said the names have already been provided to the judge and to the newspaper in confidence for its defense as part of the court process. They added that if the Duchess tried to block them in any way or pursue the point about their anonymity any further, they’d publish anyway!

“We have therefore submitted an application to ask the court to ensure that the names contained in the confidential filing, are kept confidential. We argue that it is an attempt to intimidate The Duchess and her friends, in her ongoing lawsuit against their newspaper’s unlawful behavior.”

From the looks of it, it doesn’t seem the Mail has any f**ks left to give, so, we might get those names after all! Who knows. We’ll keep you updated as this develops, Perezcious readers!