NAPLES, N.Y. — Even without a psychology degree, Bella’s natural talents made her an excellent therapist: She is calm and accommodating of a range of personalities, with the patience to listen to endless problems without so much as a judgmental moo.

From a lush, secluded pasture on the Mountain Horse Farm, a 33-acre bed-and-breakfast in the Finger Lakes region of New York, 3-year-old Bella and 2-year-old Bonnie are the highlander-angus crossbred cows that provide animal-based therapy.

Cow cuddling, as the practice is called, invites interaction with the farm animals via brushing, petting or heartfelt chats with the bovines. The experience is similar to equine therapy, with one game-changing difference: Horses tend to stand, but cows spontaneously lie down in the grass while chewing their cud, allowing humans to get even more up close and personal by joining on the ground and offering a warm embrace.

As more people are turning to a variety of animals — dogs, ducks, alligators — for their mental health, states are cracking down on how and when therapy animals can be used. But cows? You can’t take them with you. 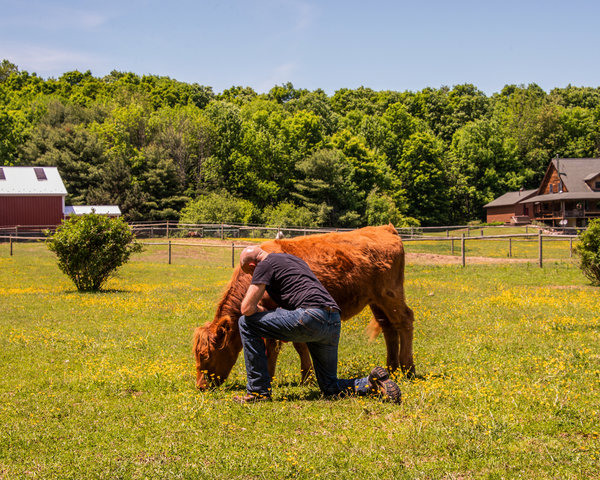 “Can you see how quiet she gets?” said Suzanne Vullers, 51, an accountant turned equine therapist who co-owns the bed-and-breakfast with her husband, Rudi Vullers, also 51. “That’s what we’re looking for,” she said. “For the person and the cow.”

Hailing from the rural town of Reuver, in the Netherlands, the pair came across “koe knuffelen,” which means “cow hugging” in Dutch, on a return visit to their homeland two years ago. In parts of the Netherlands, cow cuddling is offered as part of half-day visits, and is part of an larger movement to connect people with country life. In the major urban center of Rotterdam, a newly opened floating dairy farm in the city’s oldest port invites city dwellers to visit the beasts.

About a decade earlier, in 2007, Mr. and Ms. Vullers — he a former supply chain manager, she a former accountant — traded their corporate lives to set up their farming shop in Naples, N.Y. (Population: 2,500. Claim to fame: a grape festival that takes place in the fall, with a competition for grape pie.) The idea of cow cuddling opened the barn gates.

In May of 2018, they purchased Bonnie and Bella, selecting them for their gentle personalities and lack of horns. “A lot of cows are not suited for it,” Mr. Vullers said. ”They can chase you out of the field.”

Hourlong cow cuddling sessions, priced at $75 per couple for the hour, are capped at two a day, with a maximum of four participants per session. “It’s not petting zoo,” said Mr. Vullers, though the animals are indeed pets in a sense — they aren’t production animals, and they’re not raised for beef or dairy. “These girls get to live a natural life,” said Ms. Vullers.

Each session is overseen by two human counterparts: an equine therapist, usually Ms. Vullers, who can read the animals’s moods to ensure a safe, positive interaction with their new human friends, and a second handler, who keeps a watchful eye on the other animals in the field.

Neither has a psychology degree, which is kind of the point: “Whatever they’re going through, they don’t have to talk about it,” said Ms. Vullers. “It’s not like therapy, right?”

Like other forms of therapy, the hope is for visitors to foster trust, empathy and connection with the cows and their own emotions. And as with any other kind of therapy, there are no guarantees of successful outcomes: “They’re not trained to lie down,” said Ms. Vullers.

On a recent Saturday, two pairs of people, an engaged couple from Silicon Valley and a mother-daughter duo from upstate New York, had traveled from opposite sides of the country to cuddle some cows.

For Ms. Hudson, it was a sort of wish fulfillment, a throwback to the fond memories of visiting her grandmother’s farm. And perhaps a bit of fate, too. The email address she has used for over two decades includes the words “Missy,” which happens to be the name of miniature horse on the farm, and “moo.”

Leading the two excited but tentative women onto the field, Ms. Vullers offered guidance on a successful approach before demonstrating the methods herself. “O posture, not X posture,” she said. “Round the body” to appear less threatening. Walk up to the cow’s shoulders rather than its haunches.

“Clothing is important,” said Mr. Vullers. “They might slobber on you.” (Definite requirement: closed-toe shoes.)

For observers: “Stand sideways. It makes a world of difference to them,” said Ms. Vullers.

Number one advice for everyone: Remain calm. “The more relaxed you are, the better it will be for you and them,” she said, because horses and cows alike sense emotions and respond in kind — most of the time.

“Don’t rub your snot on me!” said Ms. Ercoli to Bella.

In the morning session, Colin Clover, 50, a recruiting manager at Facebook, stumbled upon this extracurricular activity the way that many people discover niche wellness trends: the internet. He immediately recalled that his fiancée, Alexandria Rivas, 31, a receptionist, artist and longtime equestrian enthusiast, had fond memories of visiting the dairy farm next to the college she attended.

Though he had once trained dolphins and sea lions, the idea of sidling up to a 900-pound heifer intimidated him somewhat. The nerves subsided when, he said, Ms. Vullers framed it in a way he understood. “Think of how you would interact with your dog,” he recalled Ms. Vullers saying.

In their separate sessions, the pairs had a chance not just to meet the cows, but the entire coterie of characters. In the barn and field: Jaxon, the 1,800-pound stallion, swatted flies away; Stetson, a gelding, named for the hat; Cricket and Noa, mares rescued from abusive conditions; Suzie Q and Missy, miniature horses with distinct personalities. “Missy is always the first to say hi,” explained Ms. Vullers of her outgoing, plump-bellied friend.

For the final surprise of the day, the farmers invited the visitors to hand-feed the cows oat-based treats, which many participants described as their favorite activity. Even though, Ms. Hudson said, the cows’ tongues “were like sandpaper!”

Perhaps recognizing they were in polite company, the cows only dropped themselves. Lowering to the ground, they offered participants what they traveled across state and country to experience: a chance for a warm embrace. 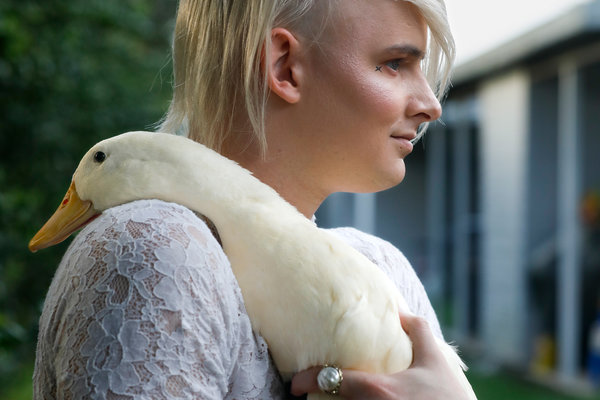 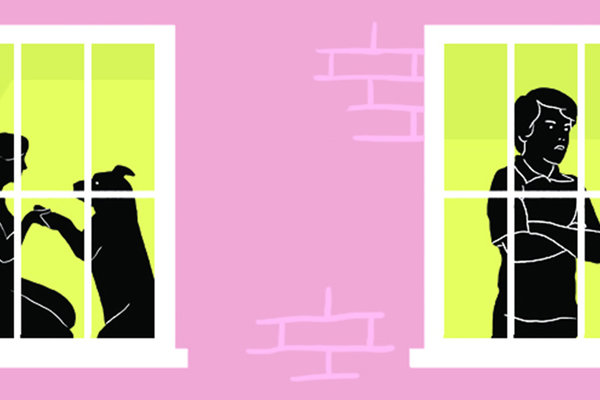 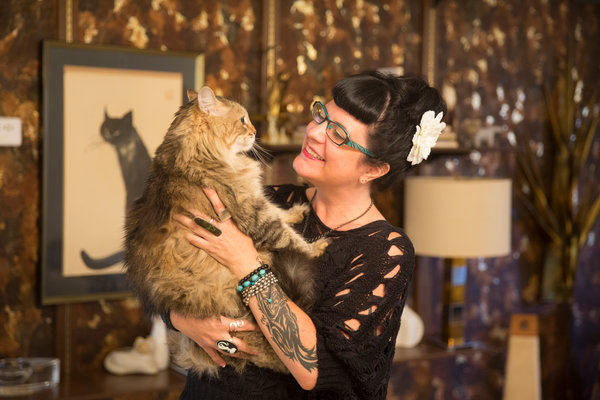 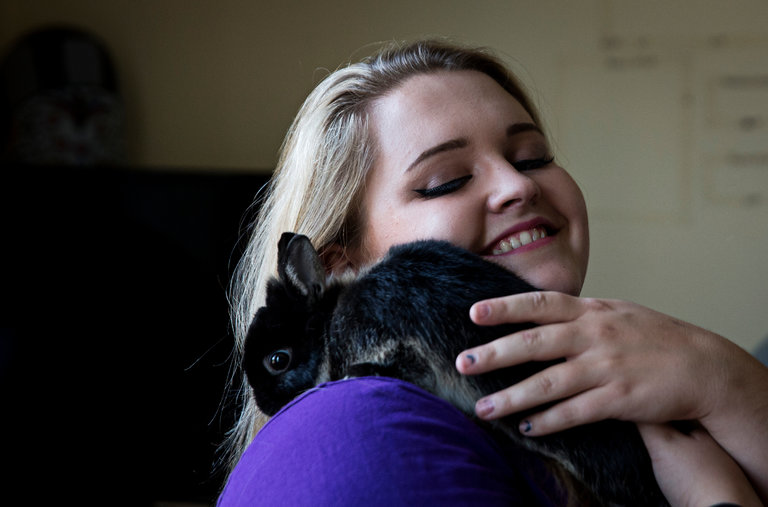 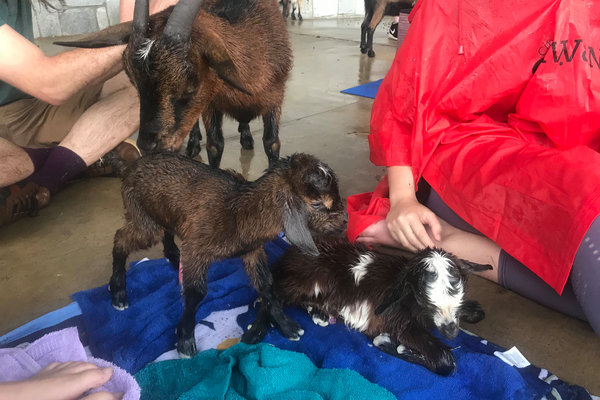