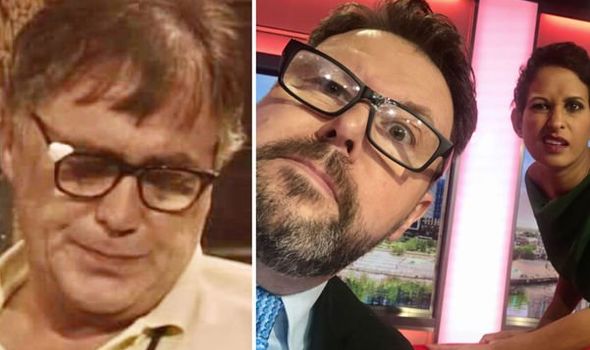 BBC Breakfast star Jon Kay, 52, sellotaped his glasses to his face after breaking them in the studio. Taking to Twitter, he likened his look to former Coronation Street star Bill Tarmey, who wore white tape on his specs during his soap years.

In view of his 39,000 followers, he wrote: “Going full Jack Duckworth on the @BBCBreakfast sofa this morning.

Many of his fans shared their thoughts on his post.

Alison Moss wrote: “You are so funny – mine are also sellotaped, have been for 4 weeks.

“It works. Reminds me to book appointment with optician.”

Stuart_JSmith commented: “We’ve all been there. If it’s not that, it’s a screw coming out of the arms and you can’t find it.”

Linda Sinclair typed: “Is there a better style icon?”

Lou Blakeway added: “It happens to us all at some point!

“Lovely to see you on the sofa, shame it can’t be on a more permanent basis.”

Two years later, he died from a heart attack while away in Tenerife.

Naga Munchetty shared her co-star’s post on her page this morning after the show.

Elsewhere on the show today, Naga apologised over an apparent blunder about Ceefax, the former teletext information service.

The presenter said she recalled booking holidays on the platform, but her co-star didn’t recall the option.

She replied: “Oh, you couldn’t book it… Oh! Ceefax was BBC.”

She went on to say: “And you got all your news updates and your weather. Oh, it was fabulous!”

BBC Breakfast airs daily from 6am on BBC One.