Nate Lashley Finally Breaks Out After Playing Golf Through Tragedy

SILVIS, Ill. — It’s a short hike from T.P.C. Deere Run’s ninth green to the 10th tee, and Nate Lashley, who was playing in his third tournament in three weeks, was dragging. Lashley paused to greet an octogenarian friend who was following his first round at the John Deere Classic last Thursday, and said, “I should have taken this week off.”

Lashley had been playing nonstop since the last week of June, when he won for the first time on the PGA Tour, in wire-to-wire fashion in Detroit, in his 33rd tour start since turning professional in 2005.

“I had so much adrenaline after Detroit, I figured it could carry me through,” Lashley said, laughing at his logic. “But it ran out pretty fast. I think I’m in my 20s again and I forget I’m 36 years old.”

Lashley has raised his game after many years meandering through small-town America and PGA Tour Latinoamérica. In the autumn of his career, he is preparing for his first British Open, starting Thursday at Northern Ireland’s Royal Portrush Golf Club, a significant step up from the Opens in Utah, Iowa, Wyoming and Colorado that once anchored his schedule.

“It’s the beauty of golf,” Lashley said. “You never know when you’re going to hit your stride.”

Lashley, a Nebraska native, will take his place alongside headliners like Tiger Woods, who with a victory can move within two major titles of Jack Nicklaus’s record of 18, and twenty-somethings like Jordan Spieth and Brooks Koepka, who already are multiple-major winners.

But perhaps no one has a more compelling narrative this week than Lashley, who is at the British Open because he won in Detroit, where he was the final alternate, and who, it could be said, was long overdue for a karmic reset.

Lashley is a solid ball-striker and a gifted athlete who might have played Division I college basketball, instead of golf, had he not stopped growing at 6-feet-1. His physical gifts have been on display for years, but until recently, he had performance issues rooted in personal tragedy.

In 2004, Lashley’s parents, Rod and Char, and his 19-year-old girlfriend, Leslie Hofmeister, died when the small plane Lashley’s father was piloting crashed in Wyoming in bad weather. They were on their way home to Nebraska after watching Lashley, then a junior at Arizona, help the Wildcats qualify for the N.C.A.A. tournament at a regional in Oregon.

Since then, golf has evoked in Lashley complicated, contradictory emotions. He knew his parents would have wanted him to continue pursuing his dream of playing golf for a living, but the sport also, understandably, has triggered within him guilt and anger.

“It took a lot of years for me to get over my parents’ deaths,” Lashley said after his win in Detroit. “It was mentally holding me back for a long time.”

In the players’ dining room inside the clubhouse at T.P.C. Deere Run last week, Lashley’s eyes welled with tears as he shared his frequent thoughts about his parents.

“Honestly, it’s pretty much everything from wishing my parents were there when I won to not telling them over the years how much I appreciated everything they did for me,” Lashley said.

His older sister, Brooke, who played volleyball in high school and for one year in junior college, has tried to put herself in Lashley’s place. What if the last time she saw her parents alive was at one of her matches? 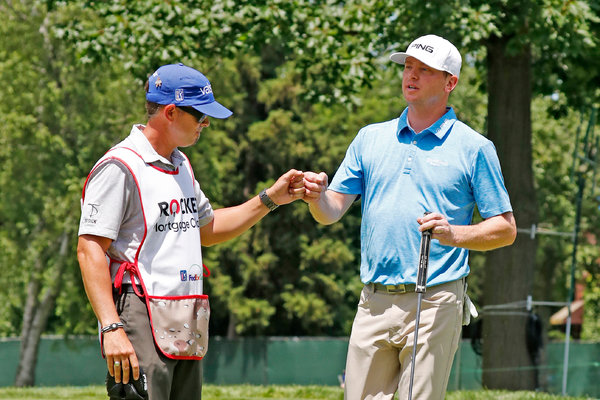 “I think I would have carried around a lot of guilt,” she said in a telephone interview, “and I think Nate probably does, too, though he has never verbalized that to me.”

Ricky Romano, who has spent two seasons caddying for Lashley, said he has never asked him about his parents’ death. But last month, on the eve of Lashley’s United States Open debut, at Pebble Beach, Romano mentioned how golf tends to bring out Lashley’s worst side.

Lashley was grilling steaks for dinner and was so relaxed that Romano was taken aback.

Romano said he told Lashley, “I don’t know who that guy is out on the golf course that is freaking out all the time.”

An even-keeled Lashley carded a first-round, four-under 67 at Pebble Beach.

“That was big for my confidence,” said Lashley, who finished the day tied for 28th. “It just kind of gave me a feeling that I belong here.”

Lashley won his next start and hasn’t slowed down. The British Open will be his fifth tournament in six weeks. “When you’re playing well, you want to play,” Lashley said.

He had a more practical reason for competing in the John Deere Classic instead of taking the week off to rest before heading overseas.

The tournament offered its players a nonstop charter flight to Northern Ireland with first-class seats at a low-cost-carrier price. That was enough to lure in Lashley, who is used to having to keep his costs down. Before this season he had career earnings of less than $300,000 in PGA Tour events and $542,000 on the tour’s feeder circuits.

It was fitting that Lashley’s breakthrough victory in Detroit, and the $1.3 million purse, came at a tournament sponsored by Rocket Mortgage: He has had his real-estate license for more than a decade.

The income he earned flipping houses and buying rental properties helped Lashley weather his lean years on the golf course. So did cost-cutting measures like traveling standby on a commercial pilot friend’s companion passes and staying with host families at tournaments.

Lashley took a four-month hiatus from the game at the end of 2012 because he felt burned out, but quitting never seriously entered his mind.

“I was making money, getting to travel and play golf,” he said. “I felt like as long as I was improving and making money, there’s no reason to stop.”

Lashley’s persistence was rewarded in 2016 when he won three times on the PGA Tour Latinoamérica circuit to advance to the Korn Ferry Tour, where he won once in 2017 on his way to securing his PGA Tour-playing privileges. His 2017-18 rookie season was cut short after 17 starts because of a meniscus tear in his knee that required surgery.

In Detroit, Lashley led after each round. When he stretched his 54-hole advantage to six strokes, his sister decided to fly in for the final day. She was seated in the front row of the bleachers on the first hole, waiting for her brother to tee off, when she overheard two fans talking about him. One said he had been waiting all day to see Nate Lashley because he was someone worth rooting for, and then explained to the other why. When he was finished, he turned to Brooke Lashley and asked if she knew the tournament leader’s story.

Nobody knows it better, which is why she can’t wait to join him in Northern Ireland midweek. Nate was set to make his first trip to Europe a few years ago with Brooke. But they canceled their plans after Brooke’s boyfriend, whom they were scheduled to meet up with in Switzerland, died in a freak drowning accident.

After so much tragedy and heartache, the family is finally making it to Europe. “I have just a lot of thoughts about my parents,” Nate Lashley said. “How happy they’d be.”