Tedy Bruschi, a three-time Super Bowl champion and New England Patriots legend, is recovering after suffering a stroke … according to the former-NFL player’s family.

Tedy’s family shared a medical update Friday afternoon on the current ESPN analyst, saying he’s recovering well after suffering a stroke on the Fourth of July. 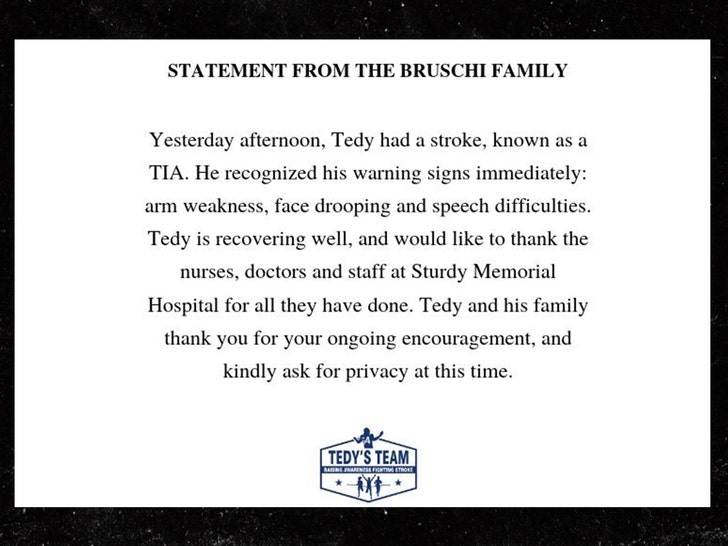 The statement from the Bruschi family says … “Yesterday afternoon, Tedy had a stroke, known as a TIA. He recognized the warning signs immediately: arm weakness, face drooping and speech difficulties. Tedy is recovering well, and would like to thanks the nurses, doctors, and staff at Sturdy Memorial Hospital for all they have done.”

The statement continues … “Tedy and his family thank you for your ongoing encouragement, and kindly ask for privacy at this time.”

Tedy, now 46, also suffered a mild stroke way back in 2005, when he was 31 and still playing linebacker for Bill Belichick‘s Patriots defense.

Bruschi recovered well enough from his 2005 stroke to return to the gridiron, playing pro football for another 4 seasons. All told, he played 13 seasons for the Pats, winning three Super Bowls as the heart and soul of the New England defense.

Tedy hung up his cleats in 2008 and has since been working as an NFL analyst on TV.