Khloe Kardashian captured her nieces Penelope Disick and North West adorably joining forces to start up a lemonade and bracelet stand for profit.

KarJenner cousins unite! Penelope Disick, 9, and North West, 8, proved that entrepreneurship runs in their famous family when they organized a for-profit lemonade and bracelet stand on Sunday, August 1. Khloe Kardashian, 37, caught her nieces in action at the stand outside and filmed their business venture on her Instagram Stories. Reign Disick, 6, was also spotted at the stand seemingly supporting his big sister and cousin.

In the first video, Khloe recorded North and Penelope playing together beside the stand, which was filled with colorful bracelets and lemonade. “Look what I came across,” Khloe can be heard saying while North put a flower in her mouth and posed for the camera standing beside Penelope. “What’s your sales pitch?” Khloe asked her nieces, adding, “Like, tell me what you’re doing here.” But neither child answered and instead continued to goof off together for the camera.

Next, Khloe captured a closer look at the lemonade and bracelet stand. As she did so, Mason could be seen walking by the stand — though he didn’t necessarily looked too thrilled to be there. “Oh my goodness, okay. And what is this?” Khloe said as she inquired over a sign that detailed the price of the items for sale. “Lemonade, 3 dollars, and bracelets 10 to 20 dollars.” Khloe then panned the camera to show the colorful bracelets up for sale at the stand, while an unknown woman could be heard saying in the background, “Yeah but they’re handmade by Penelope and North!”

Khloe, clearly impressed with her nieces’ work, gushed over the bracelets at the stand. “You guys made these??” she said, as Penelope and North excitedly cheered over their creations. And as any good aunt would, Khloe gave the girls some business and bought one of the bracelets. She captured a photo of the creative jewelry in her next Instagram Story slide, which showed the bracelet on her wrist right under a tattoo. The bracelet was filled with colorful beads and letters — created entirely by Penelope and North all on their own! 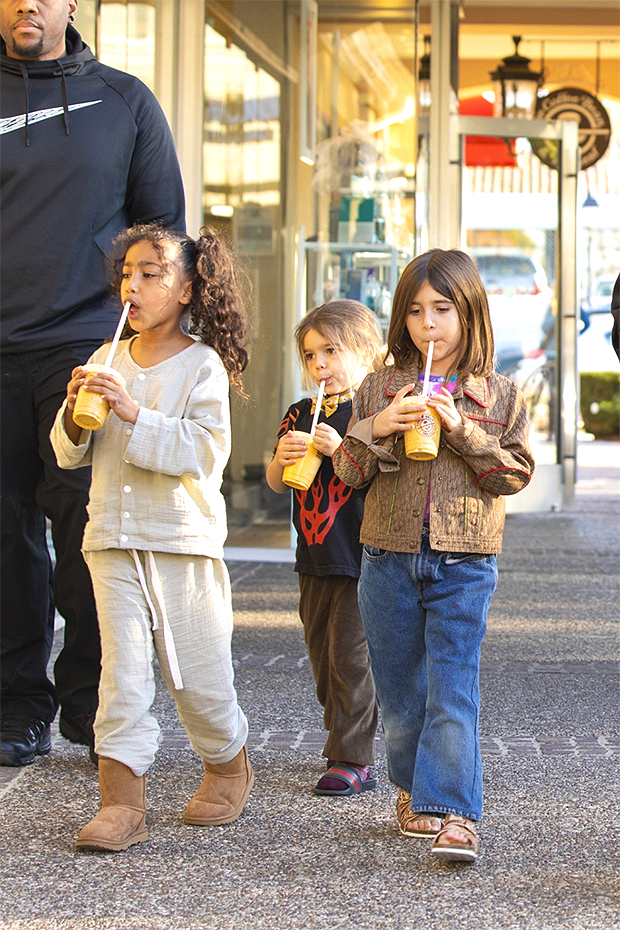 Penelope and North have plenty of loved ones to look up to when it comes to owning a business. Khloe, of course, is co-founder of Good American clothing line. Meanwhile, Penelope’s mom Kourtney Kardashian owns POOSH, a lifestyle website, and North’s mama Kim Kardashian has KKW Beauty and SKIMS under her belt. And don’t forget Aunt Kylie Jenner‘s makeup line, Kylie Cosmetics, and Aunt Kendall Jenner‘s new tequila line, 818 Tequila. The business are all helped run by grandma Kris Jenner, the family’s “momager.”