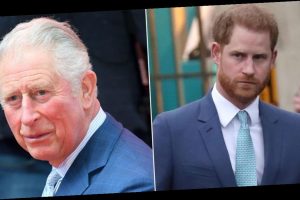 Prince Harry is reportedly "overwhelmed with guilt" after moving away from the UK as his dad, Prince Charles, tested positive for coronavirus.

The 35 year old and his wife Meghan Markle, 38, moved to California last month after stepping down as 'senior' members of the Royal family.

But just days after their Stateside move, Clarence House revealed the Prince of Wales, 71, had tested positive for the deadly bug.

A source close to the Duke of Sussex has now opened up on his emotions after learning of his father's diagnoses.

The insider said: "Despite their ups and downs, hearing that his dad is sick with a potentially life-threatening illness is a huge wake-up call.

"And he's overwhelmed with feelings of guilt for not being closer to home while this is all going on," the source continued to tell Us Weekly.

They continued to reveal that Charles had told both Harry and his brother Prince William, 37, he had contracted the illness in a "heart-wrenching" phone call.

The insider continued to tell the publication: "During the heart-wrenching call, he confessed to feeling beyond helpless, being over 5,000 miles away in L.A.

"Charles tried to calm Harry down by saying he's OK and that he's only suffering from mild symptoms, which slightly helped put his mind at ease but he's [Harry] still worried.

"Harry's admitted it's hit home that Charles and the Queen aren't going to be around forever.

"Harry tries to keep in regular contact with the Queen and Charles, but due to the eight-hour time difference calls are few and far between.

"The royals are desperately trying to rally together amid the pandemic, which is a huge struggle given that they've been forced to physically separate."

Get 13 issues of OK! Magazine delivered for £13 – or download free for 14 days on your tablet

You can now get OK! Magazine delivered through your letterbox for the unbeatable price of 13 editions for just £13 – or free for 14 days on tablet.

Be the first to hear about celebrity engagements, babies, splits and more with this incredible limited time subscription deal to the UK's leading celebrity weekly magazine.

These amazing offers mean you won't have to miss out on your favourite read during the ongoing crisis.

They're perfect if you're self-isolating – or have an elderly family member or friend who can't get out of the house. To sign up simply visit ok.co.uk/subscribe Offer valid until Tues April 28, 2020. Or get the magazine on your digital device with the tablet edition free for 14 days on iOS or Android.

It was previously reported that Meghan had refused to let Harry fly back to the UK to support his father, with a source telling MailOnline that the former actress had told Harry that "under no circumstances, is she okay with him travelling anywhere right now."

An insider said: "Meghan said Harry's been in touch with his dad… Of course, he's frustrated.

"She said they both are frustrated because they are doers and want to do so much more to help.

"Meghan told her inner circle of friends that Harry has been communicating with Prince William and the Queen on a pretty consistent basis.

"She said this world crisis has actually brought them all closer together, especially Harry and his brother.

"Harry has made it very clear to them that he will do whatever he can to help from Canada.

"Meghan said they are grateful, especially Harry, that they could spend time with his family before all this insanity began."

OK! online has contacted a representative for Prince Harry for comment on this story.