On July 21, 1959, Pumpsie Green made his major league debut as an eighth-inning pinch-runner with the Boston Red Sox, then played at shortstop to finish the game against the Chicago White Sox at Comiskey Park.

Green’s appearance was merely a blip in the box score, but his presence in a Red Sox uniform represented a climactic moment in baseball history.

Green, who died on Wednesday at 85 at a hospital in San Leandro, Calif., was the first black player for the Red Sox, the last of the 16 major league franchises of the time to have remained all white. His family confirmed the death in a statement, adding that he had been ill for five months.

In April 1945, the Red Sox, under pressure from a Boston city councilman, gave a brief tryout at Fenway Park to Jackie Robinson and two fellow Negro league players. None of them heard from the Red Sox again.

When Robinson broke the modern major league color barrier in April 1947 with the Brooklyn Dodgers, Green was 13, living in the San Francisco Bay Area and hoping that someday he might play baseball with a Pacific Coast League team of the high minors.

But the Red Sox, owned by Tom Yawkey, had maintained that they could not find a single black player to help them.

“I’m no martyr, no flag-carrier,” he told The Boston Herald when he was completing spring training with the Red Sox in 1959. “I’m not even interested in being the first Negro to make the Red Sox.” He said he just wanted a chance to play for Boston and, so far as pioneering went, “all the rest of it can wait.”

Green himself had some waiting to do. The Red Sox sent him back to their Minneapolis farm team just before the 1959 season began, saying he wasn’t quite ready for the majors, though he had showed promise as a hitter in camp.

The Boston chapter of the N.A.A.C.P., accusing the Red Sox of racial discrimination, expressed outrage at the failure to promote Green, and the Massachusetts Commission Against Discrimination, a state agency, began an inquiry. It ended when Red Sox officials promised to “make every effort” to field black players. 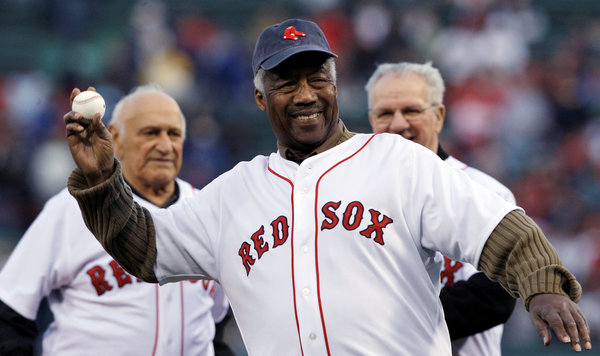 Green finally got his chance on that July night in Chicago, and pitcher Earl Wilson become the second black player with the Red Sox a few days later.

When Green played in his first game at Fenway Park, on Aug. 4, 1959, against the Kansas City Athletics, starting at second base, he received an ovation, and he hit a triple in his first at-bat.

“I was almost on a cloud or in a trance or something,” he told the New England Sports Network long afterward. “I couldn’t breathe. I was so hyped up.”

Green received a congratulatory phone call from Jackie Robinson. The Boston Celtics’ Bill Russell and K.C. Jones, whom Green knew from their playing days at the University of San Francisco, befriended him. Green found Ted Williams to be especially welcoming.

Elijah Jerry Green Jr. — nicknamed Pumpsie by his mother, Gladys, as a child though he was never sure why — was born on Oct. 27, 1933, in Boley, Okla. At the outset of World War II, his family moved to Richmond, Calif., in the Bay Area, and his father and mother found jobs in defense work.

He played shortstop at Contra Costa College in San Pablo, Calif. and joined the Red Sox’ farm chain in 1956.

Green was a man apart at spring training with the Red Sox in Scottsdale, Ariz., in 1959. The team’s hotel barred black guests, so the Red Sox found lodging for him at a hotel in nearby Phoenix, and he was driven to and from workouts by a team employee.

He later coached and taught in the Berkeley, Calif., high school system.

Green returned to Fenway Park in April 2009 for a part of baseball’s annual ceremonies to commemorate Jackie Robinson’s breaking of the color barrier. Fifty years after he made his Red Sox debut, he heard the cheers once more, this time when he threw out the ceremonial first pitch, to David Ortiz.

Reflecting on the America of the 1950s, Green expressed no lingering bitterness toward the Red Sox for their long reluctance to have a black player.

“When I was with the Red Sox, what was fair?” he told The New York Times in 1988. “I didn’t have to leave California and go to Boston to be discriminated against.”