Rihanna stepped out with boyfriend A$AP Rocky in New York this week and rocked daisy dukes and a fuzzy bucket hat.

Rihanna continued to display her love of very good bucket hats while out with A$AP Rocky earlier this week. The Fenty Beauty founder, 33, stepped out with her rapper boyfriend, 32, in New York on Wednesday, Aug. 4 for a shopping excursion with her go-to accessory — this time, in a fuzzy pink. She paired the fuzzy pink hat with daisy dukes with high slide slits and a Dior top. 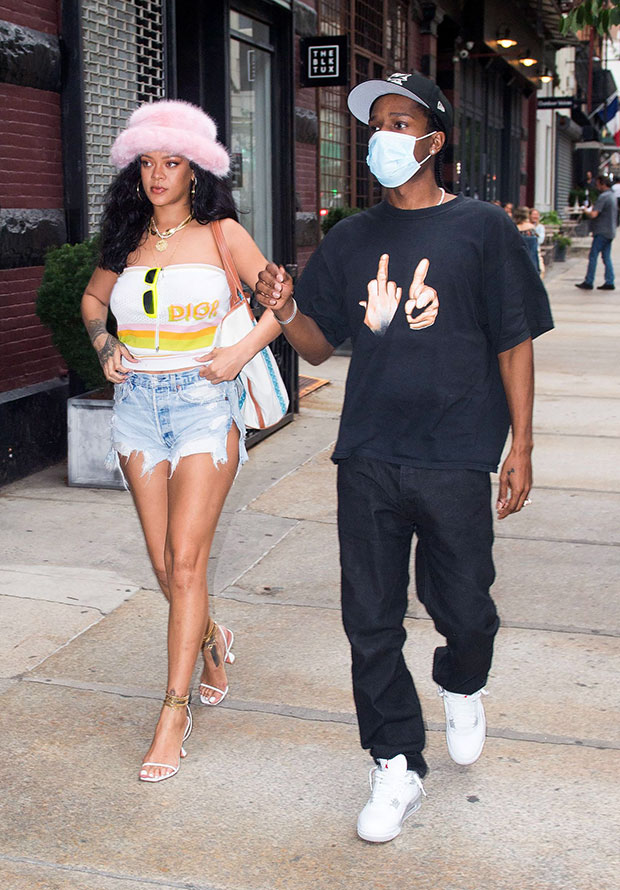 The singer accessorized with heels and yellow-framed sunglasses tucked into her top. A$AP, real name Rakim Mayers, opted for a black t-shirt that featured a graphic of a hand with the finger gesture. He finished the look with black trousers, white sneakers, and a baseball cap. The rapper also wore a surgical mask for COVID-19 safety.

The longtime friends and collaborators went public with their relationship last November, when they were spotted out at dinner in the city on Thanksgiving weekend. It came after RiRi and her billionaire boyfriend Hassan Jameel split in early 2020. The relationship reportedly blossomed amid COVID-19 quarantine — and A$AP even revealed that he and his girlfriend went on a road trip across America last summer.

The rapper opened up about the trip and his relationship in his interview with GQ in May — and even referred to RiRi as the “love of my life.” He said of their cross-country trip, “Being able to drive and do a tour without feeling like it was an occupation or an obligated job agreement, I feel like that experience is like none other.” A$AP added, “I never experienced nothing like it.”

When asked about what it was like to be in a relationship, A$AP gushed: “So much better. So much better when you got the one. She amounts to probably, like, a million of the other ones.” He added, “I think when you know, you know. She’s the one.” When asked about the possibility of fatherhood, too, the rapper said, “If that’s in my destiny, absolutely.”

A source previously opened up to HollywoodLife about the couple’s “sincere” and “natural” chemistry. “She looks more in love than ever,” the source told HL. “They have natural chemistry. It seems sincere and real and they both smile every time they see each other.”