Home » Celebrities » ROLAND WHITE: We can always rely on Bake Off for stale skits

ROLAND WHITE: We can always rely on Bake Off for stale skits

ROLAND WHITE reviews last night’s TV: We can always rely on Bake Off for stale skits and soggy bottoms

The Great British Bake Off

The Pyrenees, with Michael Portillo

At a time of great national change and uncertainty, wasn’t it comforting to watch a dozen people baking sponge cakes? Even if some ingredients of this much-loved show are starting to look a bit stale.

The new series began with a sketch about Star Wars in which Matt Lucas played ‘Luke Piewalker’ and Noel Fielding was ‘Princess Layer Cake’. Never mind dad jokes, these were great-grandad jokes.

Then there’s the shtick that Paul Hollywood is the show’s tough guy, the Phil Mitchell of patisserie. 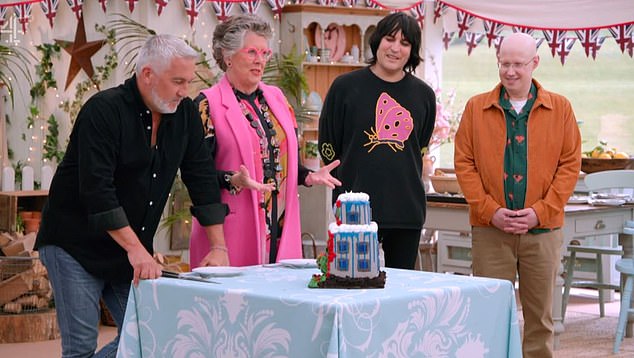 At a time of great national change and uncertainty, wasn’t it comforting to watch a dozen people baking sponge cakes? Even if some ingredients of this much-loved show are starting to look a bit stale

This hard-man image was mentioned more than once as he prowled around the tent. Actually, Paul is as soft as a choux bun. He doesn’t pull his punches as a judge, but he also offers sympathetic words of encouragement.

Prue Leith can be just as critical, in fact, but it’s hard to act tough when you’re wearing shocking pink spectacles.

So what about the really important people, the bakers?

Polish-born Janusz, 34, was named Star Baker. Asked to produce a cake in the shape of a house for the showstopper round, he baked a stunning and colourful replica of his mother’s flat in Poland. But is he just a little too pleased with himself?

In the first round, Angolan Sandro baked mini-sandwiches in the shape of flowers in pots and came second in the red velvet cake challenge. ‘I’m happy with second,’ he said. ‘Second is kind of first.’

No, Sandro, second is kind of second.

Some contestants struggled from the start. ‘It’s interesting to have a disaster in your first challenge,’ sighed Will, 45. More disasters followed, and he was shown the tent door. 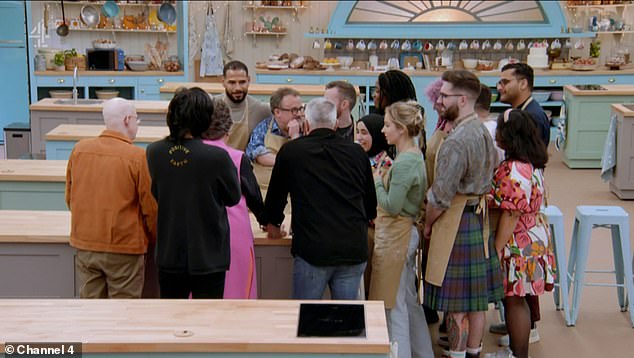 Watch out, too, for purple- haired supermarket checkout lady Carole, 59, who might be a bit of a character.

Gathering her ingredients for the showstopper challenge, she mused: ‘Who doesn’t like coffee and walnut? Unless you don’t like coffee, or you’re allergic to nuts.’ Not just a baker but a comic philosopher, too.

What is it about Michael Portillo and bright colours? The outfits he wears for his railway journeys are so dazzling, fellow passengers should really be issued with protective goggles.

In The Pyrenees (C5) he was more soberly dressed but his bright orange beanie hat could probably have been seen for miles around, as he trudged up mountain paths with his dicky hip and walking stick.

The former Conservative Cabinet minister has walked 300 miles from Spain’s Atlantic coast to the Mediterranean but this final stage of his journey was like a poignant episode of Who Do You Think You Are? with mountain views. Portillo’s father, Luis, was a junior minister in the republican government overthrown by General Franco in the Spanish Civil War. Luis fled to France and his son walked up the very path his father must have used to reach the border.

Portillo Jr was in sombre, philosophical mood, recalling that his uncles all fought for Franco against his father’s government.

He was far more upbeat about his journey at its end: ‘On every step along the way I felt the joy of being alive.’ Could he have said that if he’d stuck to politics?

Christopher Stevens is away.

Politician of the week: Former Soviet leader Mikhail Gorbachev, who died last month aged 91, was instrumental in ending the Cold War but modest about his achievements. Interviewed in Gorbachev, Heaven (BBC4) he suggested an alternative title for the programme: Conversations With A Crank.