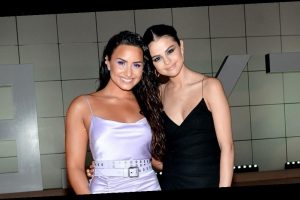 Selena Gomez and Demi Lovato were tween queens of the 2000s. Their friendship had its up and downs, but, in the end, there’s no bond stronger than a friendship formed during their shared Disney Channel days. Lovato performed one of her most vulnerable and difficult performance yet at the 2020 Grammys on Jan. 26, and Lovatics are definitely here to support her. But Selena Gomez’s Instagram post about Demi Lovato’s 2020 Grammys performance must have been a great source of support for Lovato as well.

The Grammys is a huge night for the music industry, not only for musicians who are nominated for awards, but for artists who get to perform in front of their own peers. So, Lovato’s first live performance since she was hospitalized after her overdose in July 2018 is major. While Gomez couldn’t be there to show her friend IRL, she sent Lovato a whole lot of love on Instagram stories.

“I wish there were words to describe how beautiful, inspirational and DESERVED this moment was,” Gomez wrote over a screenshot of Lovato on the Grammy Awards stage. “Demi I’m so happy for you. Thank you for your courage and bravery.” 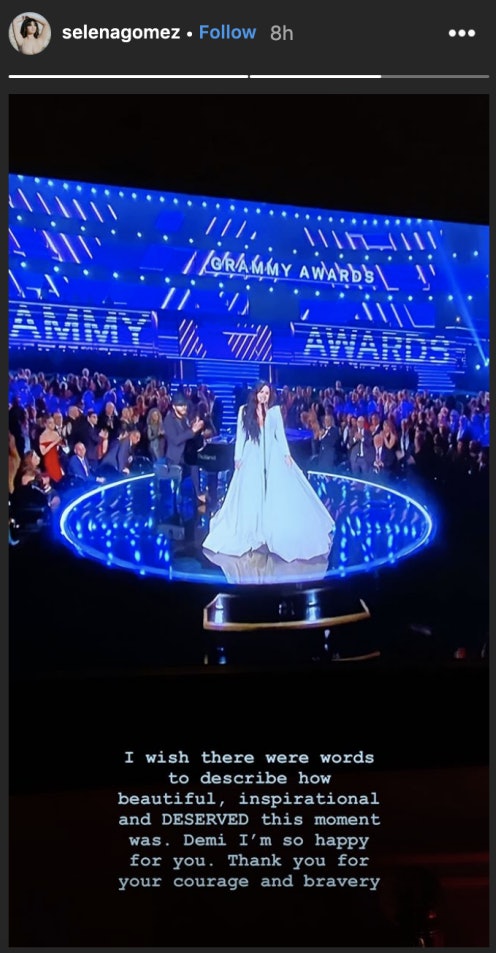 Prior to the performance, Lovato spoke with Apple Beats 1 Radio "New Music Daily" about her new track "Anyone," which she wrote four days before her hospitalization.

“I wish I could go back in time and help that version of myself. If I ever come back, I want to sing this song,” she said before opening up further about the song’s lyrics. “I almost listen back and hear these lyrics as a cry for help. And you kind of listen back to it and you kind of think, How did nobody listen to this song and think, ‘Let’s help this girl?’”

Later in the interview, Lovato also acknowledged she is in the process of healing and it’s an ongoing process. Lovatics, and Gomez, are rooting for her in this exciting time as she prepares to drop a brand new album.