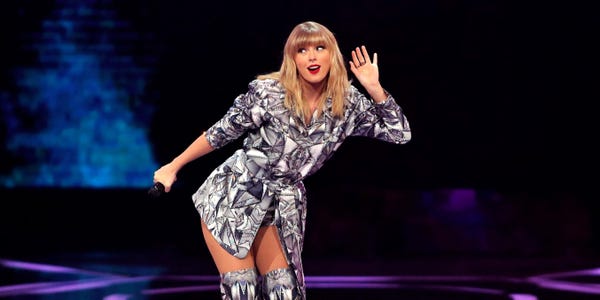 It's the first time Swift has approved her own music to be used for a political ad after her cover of Tom Petty's "American Girl" was played in a video at the 2020 Democratic National Convention, according to Rolling Stone. The ad was produced by Remedy PAC, a political action committee launched in May by Rep. Eric Swalwell of California.

The ad was originally shared on Twitter by Swalwell on Friday. A line at the end of the video credits Swift for her lyrics and says the music was used with her permission.

"Thank you, @taylorswift13, for voicing what #OnlyTheYoung can do. Let's run!" Swalwell wrote, quoting Swift's lyrics from the song: "Up there's the finish line. / Our future is worth our fight."

The video begins with a voiceover from Democratic vice-presidential candidate Sen. Kamala Harris, who says: "Why are so many powerful people trying to make it so difficult for us to vote?"

The video continues with Swift's lyrics in the background, which say: "And the big bad man and his big bad clan / Their hands are stained with red / Oh, how quickly, they forget." With each verse, pictures of top Republican officials including President Donald Trump, South Carolina Sen. Lindsey Graham, and Senate Majority Leader Mitch McConnell appear onscreen.

The theme of the video, in line with Swift's song — which the singer released in January alongside her "Miss Americana" documentary — is focused on encouraging young people to fight for their rights.

Harris, who retweeted Swalwell's post on Friday, thanked the California representative and Swift "for showing young people what's at stake in this election." Swift then reshared Harris' message on Friday.

Earlier in October, Swift officially endorsed Biden for president in an interview with V Magazine.

"I will proudly vote for Joe Biden and Kamala Harris in this year's presidential election," Swift told the magazine. "Under their leadership, I believe America has a chance to start the healing process it so desperately needs."

Swift also shared a picture of her holding a plate of "Biden Harris 2020" cookies, writing that on the night of the debate between the vice presidential candidates, she was "Gonna watching and supporting @KamalaHarris by yelling at the tv a lot."