Home » Celebrities » The Mystery of Davé

The Mystery of Davé 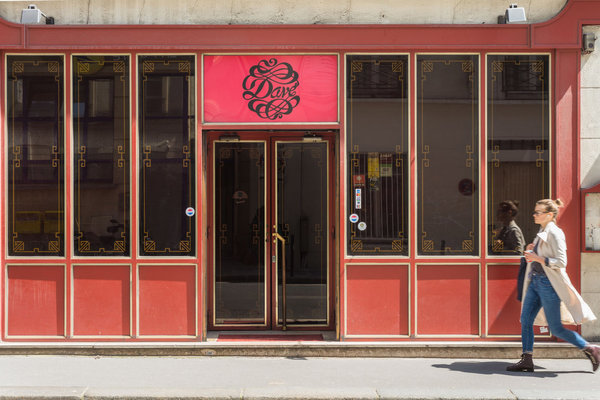 PARIS — In the summer of 1998, this newspaper ran an article about a restaurant here.

“The first rule of fashion is that if something is fashionable, it is doomed to become unfashionable, especially if it is fashionable with the fashion crowd,” the article read. But, it said, there was one exception: “Davé.”

I wrote that article, and it turns out I was wrong.

Davé (pronounced Dah-VAY), a Chinese restaurant on the Right Bank that for years — no, decades — was Fashion Central, eventually did fall out of fashion. So much so, that when Davé closed in February 2018, and its owner, Davé Cheung, retired, no one really noticed.

“Suddenly it wasn’t there anymore,” said Prosper Keating, a former features editor of Vogue Hommes International, who first went to Davé in 1993 with Odile Gilbert, his future wife, a hairdresser famous for inventing the fantastical ’dos that John Galliano desired for Dior shows. “The younger crowd wanted something a little bit different, like La Belle Époque, Franck Maillot’s place on the Rue des Petits-Champs. Davé was too dark, and too 1970s.”

Too much a relic of another fashion world.

It began like this: Back in the mid-70s, Barney Wan, the art director at British Vogue, dined at Pergola du Bonheur, a Chinese restaurant in the then-down-market quartier of Oberkampf in northeastern Paris. It was owned by Mr. Cheung’s father, a Chinese émigré, and several family members worked there, including Mr. Cheung, who was born in Hong Kong in 1953.

So wowed was Mr. Wan by the cuisine, he returned for lunch with his colleague, the fashion editor Grace Coddington. She also swooned.

About the same time, Mr. Cheung met June Newton, a.k.a. the photographer Alice Springs, at a friend’s home in Paris, and invited her to the Pergola du Bonheur. She went with her husband Helmut, and they loved it as much as Mr. Wan and Ms. Coddington. But by 1980, Pergola du Bonheur had closed.

About a year and a half later — June 1, 1982, to be exact — Mr. Cheung opened his own place, Davé, on Rue St.-Roch, in the heart of the First Arrondissement. Mr. Wan, Ms. Coddington and the Newtons became regulars, and they brought their friends and colleagues: the Newton model-turned-stylist Jenny Capitain and the American Vogue editor Polly Mellen. Ms. Mellen, in turn, brought the fashion photographer Arthur Elgort, and so it went.

The room was small and low-lit, with velvet curtains, golden lanterns and a large tropical fish tank that divided the ultra-V.I.P.s — people like Allen Ginsberg, David Bowie, Bernardo Bertolucci, the Newtons — from the fashion rabble (editors, stylists, models).

No one ever saw a menu. Davé — everybody called him Davé — would simply rattle off what he thought you should have: Vietnamese spring rolls, which you would enrobe in mint and lettuce leaves and dunk in nuoc cham; crispy fried chicken breast, napped with a lemony syrup; canard laqué, which was roasted duck breast, sliced and served, Peking duck style, with small pancakes, scallions and hoisin sauce; salt-and-pepper shrimp.

For dessert, a sister, the jovial Aline stationed behind the bar, would slice up and plate the juiciest mangos in town.

Prices were never mentioned; Davé would simply tot up the bill on a little pad, and slide it your way. “If you weren’t known there, he charged you through the nose,” Mr. Keating recalled. “But if you were working for fashion magazines, and badly paid, it was half price. Davé was cheap when he knew you, and you actually worked for a living.”

Like a party host, Davé would circle the room, gossiping, advising, flirting. Late at night he would whip out his Polaroid camera, snap the equivalent of early selfies with fashion stars and Hollywood A-listers, and tack the results on the pillars and walls (intermingled with his own portraits taken by Mr. Newton, Albert Watson and Bruce Weber). Over there: Leonardo DiCaprio and Davé. And there: Cameron Diaz and Davé. And there: Iggy Pop and Davé. And there: Yves Saint Laurent and Davé. A veritable Hall of the Fabulous and Famous in every sight line.

In September 2001, Mr. Cheung moved the restaurant a few blocks east, to Rue de Richelieu, near the Palais-Royal. The space was twice as large as the original Davé, thus less exclusive (though the “Complet” sign was permanently posted on the red lacquer door, allowing him to control access). And the entrance was decidedly less discreet. Rue St.-Roch is a narrow back street: Limos could line up, and stars hop out, and no one was the wiser. Rue de Richelieu is a major thoroughfare. You could never sneak into that Davé.

Despite the grumbling, the regulars still flocked there.

Then came the financial crisis of 2008. Travel budgets were slashed. Expense accounts were tightened. Magazines folded. Davé felt it. From one day to the next, he said back then, his friends — because that’s how he saw his customers — stopped coming.

He carried on; reservations would pick up during fashion show seasons. But the rest of the year? It was not “Complet.”

In late 2017, “a Japanese couple — charming! — came to see me,” Mr. Cheung said earlier this month, sitting at the memorabilia-cluttered dining table of his small Left Bank flat (across from Saint Laurent’s former home). Still lean and impish, his Beatles-like mop has gone wholly gray, his signature clean-shaven visage now blotted by an ash-white Shaolin beard.

“They have a ramen place on the Rue Mazarine — small! — and wanted a Right Bank outpost,” he continued. “They made me a good offer for the lease, and since I’m 65 — France’s retirement age — I thought, ‘Yes, now it’s time to stop.’ And that’s what I did. I stopped.”

Not that his retirement is quiet. Mr. Cheung is active on Instagram (@taidavecheung). “The internet is wonderful, isn’t it?” he said. And he is cooking up a visual memoir with Phaidon Press. “Very conversational,” he said, “which is perfect.” And he has been talking with the Helmut Newton Foundation in Berlin about mounting a show of his Polaroids. “I have so many of Helmut and June,” he said.

As for the new restaurant that took the place of Davé, “They opened a few weeks ago,” he said briskly. “Noodles. I hear it’s very good.”