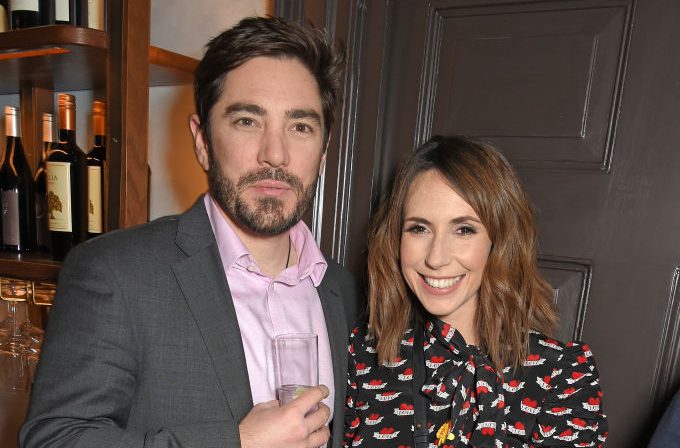 Alex Jones has revealed she is in hospital to be monitored as she prepares to welcome her third child.

The One Show presenter, 44, is due to give birth to her third child, a baby girl, and told her followers that she is currently under observation by doctors.

Sharing a photo of her in a hospital bed with bands around her bump and her husband Charlie Thomson looking on, she wrote: ‘Just been brought in to have a bit of monitoring… nothing exciting so far.’

Alex was all smiles in the photo, taken at 3am on Saturday morning, as she waited to meet her little one.

She and Charlie currently stare two sons, Edward, four, and Kit, two, so their new arrival will be the couple’s first daughter.

Alex had left The One Show at the start of the month for maternity leave, meaning the baby will be due very soon.

The presenter was left in tears on her final The One Show appearance before maternity leave as she was surprised with sweet messages from her celebrity pals.

She told viewers that she was hoping to be back on screens in the Autumn, admitting it was ‘hard’ to leave the show.

Alex had also vowed to be there to take her eldest child to his first day of school despite it being around the time she was due to give birth.

She told HELLO! Magazine: ‘Oh my gosh, even if I’ve had the baby an hour before, nothing will stop me – literally hell or high water. I mean, I wouldn’t miss it for the world. I think it’s a rite of passage as a parent.

‘Both Charlie and myself will probably go. I will sob, I mean, I’m filling up now thinking about it. We will then go for a coffee and gather ourselves.’

Alex and Charlie had announced the happy news they were expecting their third child back in March, posting a black-and-white photo of her family clutching a board, which read: ‘Coming Soon… Baby Number 3.’

She captioned the sweet snap: ‘The best surprise ever.’